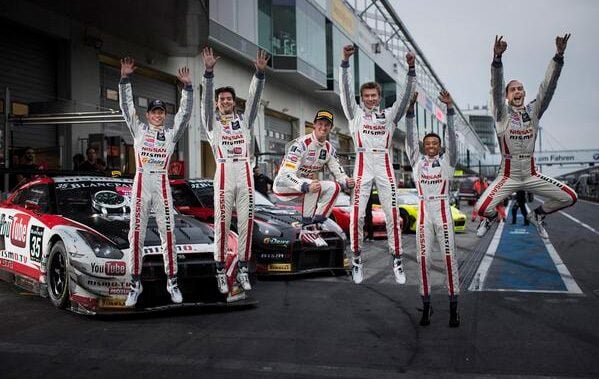 Despite a rather topsy-turvy six hours at the Nürburgring, Lucas Ordoñez has claimed the Blancpain Endurance Series Pro-Am driver title and with it the teams’ championship for Nissan GT Academy Team RJN.

An incident-packed race saw the Nissan team’s nearest challengers, the AF Corse Ferrari, eliminated early in the race, but the GT-Rs didn’t have it all their own way either. Numerous visits to the pit soon added up and eventually both cars finished more than 20 laps down on the class leaders. 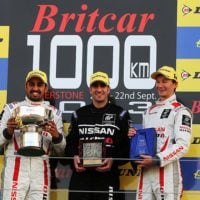 For a time it looked like the title was in Alex Buncombe’s pocket as he lead Pro-Am overall – and co-driver Jann Mardenborough (on double-duty with British F3) was busy setting laptimes that would embarrass the Pro cars, with a 1’57.106 being the fastest lap in class by a good margin.

Both cars endured numerous incidents that eventually left them 8th and 9th in class, but it was the all-gamer car of Ordoñez, Reip and Pyzera that took the important points that gave Lucas the drivers’ title – with Peter taking 3rd, just a point from 2nd in his first season racing GT3s.

Meanwhile at Silverstone, Middle East and South Africa champions Salman al Khater and Ashley Oldfield were embroiled in a 1000km race of their own. Paired with Tomas Scheckter, the team took a class victory in their Nissan 370Z GT4.

Congratulations to all the GT Academy graduates and RJN Motorsport!

Alex BuncombeJann MardenboroughLucas OrdonezMark ShulzhitskiyPeter PyzeraWolfgang Reip
The original comments for this post are no longer available.
Can You Beat the Impossible Gran Turismo Quiz?