Incredibly, the last time the Gran Turismo family gathered together for an in-person event was in February 2020, for the season-opening World Tour Sydney.

While that event looked to be under threat from wildfires, it passed without a hitch. Instead it was to be a micro-organism that forced plans to change, cancelling further World Tours and moving the showpiece esports tournament to an online affair.

Although the virus is still with us — and more on that later — the return to relative normality means that live events can once again take place, with precautions. Salzburg once again hosts, becoming the first venue to stage three World Tour events and appear in three seasons.

Hangar-7, located just off the runway at Salzburg’s W. A. Mozart Airport, is the home of Red Bull’s “Flying Bulls” collection of historic aircraft. It also houses various Red Bull vehicles and a restaurant, and an event space that Gran Turismo has occupied previously in 2018 and 2019.

For Nations Cup the 16 drivers who raced in World Series Round 1 last weekend will race against 16 online qualifiers for 12 spots in the Round 2 and Round 3 events, which also guarantees a spot in November’s World Final in Monaco.

Manufacturers Cup will see the top 12 brands from the online Season 1 racing off — with series sponsors Genesis, Mazda, and Toyota guaranteed a spot — represented by the top driver for each brand in each of the three regions: EMEA, Asia-Oceania, and Americas.

In each case, there’s also World Series points on offer for the Showdown. The winning driver or brand will take six points, with one less point in each position down to one point for sixth. That adds to the points already scored in Round 1, with three points to the winner down to one point for third.

Those of you taking part in the “Bonus Campaign”, with in-game rewards for guessing the winners of World Series events, will have likely noticed that Miyazono is no longer available as an option in the Nations Cup. Neither is Andrew Brooks, who has returned a positive test and won’t travel to Austria — the latest example of his shocking luck at live events — and it appears the same applies to Miyazono.

There’s another significant absentee for the same reason: Kazunori Yamauchi. This will make the Showdown the first live GT event that the series creator has ever missed, and the first time in the Sport Mode era he’s not been available to present the trophies.

With Gran Turismo 7 still being relatively new and only one online event under its belt — the Showdown will be its first ever live event, and a nailbiter for the events team as a consequence — it’s tough to draw any conclusions as to likely form at present.

On the one hand, the online qualifiers have more familiarity with the foibles of GT7, but many of the 2021 drivers have more experience with the pressure of live events — and with being judged by a live audience.

Nations Cup will consist of three qualifying events, with one each for the Americas region, the Asia-Oceania region, and the Europe/Middle East/Africa region. The top three in each will advance to the final, with the next three racing off for three more spots in a second-chance repechage.

In Manufacturers Cup there’ll be a single, 48-lap endurance race at Trial Mountain in the brands’ Gr.3 cars. Each driver for each marque must drive the car at least once, and each grade of tire — Racing Soft, Medium, and Hard — must be used for at least 14 consecutive laps in the race.

You’ll be able to catch both events live on Gran Turismo’s YouTube channel, with Manufacturers Cup at 1900 UTC on Saturday July 30 and the Nations Cup at the same time on Sunday July 31.

GTPlanet wishes all competitors the best of luck and a speedy recovery for those unable to attend through illness. 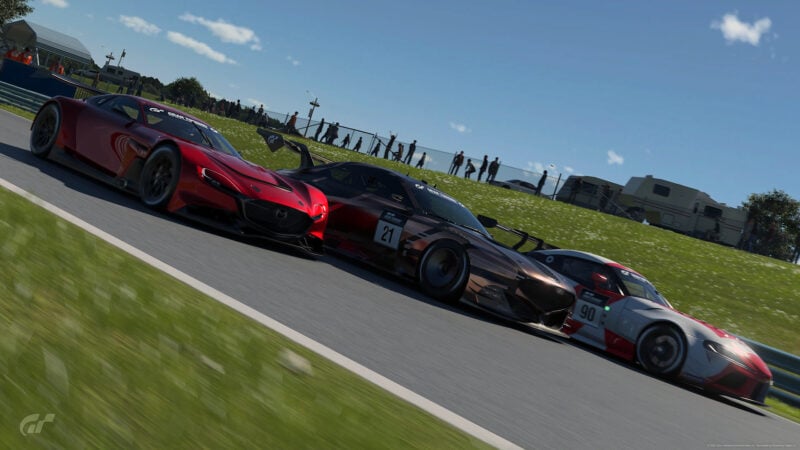