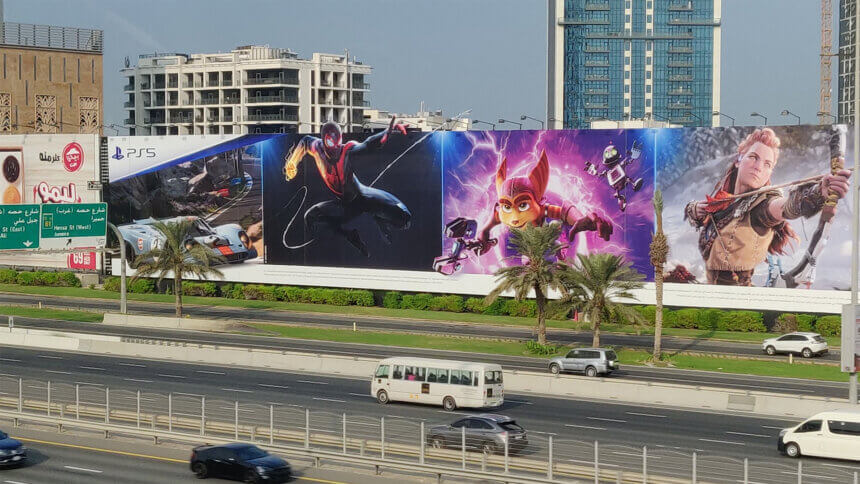 It looks like the advertising campaign for Gran Turismo 7 is starting in earnest, with the second sighting of a brand new promotional piece in under a week.

Last Monday, a Canadian GTPlanet user noticed a GT7 advert served up by YouTube. This ad not only featured all-new artwork, but gave a first official look at a release window: the first half of 2021.

Today’s new item comes from slightly further afield. A giant roadside billboard for PlayStation 5 has appeared on Sheikh Zayed Road in Dubai, in the United Arab Emirates. James Stevenson, the Community Director at Insomniac Games shared an image of this billboard, around two miles from the Dubai Autodrome, on his Twitter account:

Insomniac is behind two of the PlayStation 5’s launch and launch-window titles: Spider-Man: Miles Morales; and Ratchet & Clank: Rift Apart. Both have featured prominently in the console’s build-up, and naturally their presence on the billboards caught Stevenson’s eye.

Gran Turismo fans though will more likely be interested in the GT7 section of the boarding, hiding behind the tree to the left. It again features the new Trial Mountain circuit and the Porsche 917K, just like the original launch trailer. However, like the Canadian ad last week, both the track and car images are new angles that we’ve not previously seen.

We’ve not had any official word about Gran Turismo 7 since that grand debut back in June, nor has there been any new media. The second appearance inside a week of new angles of known game assets could suggest that this situation is about to change — and lends further weight to the suggested schedule of a 2021 launch.