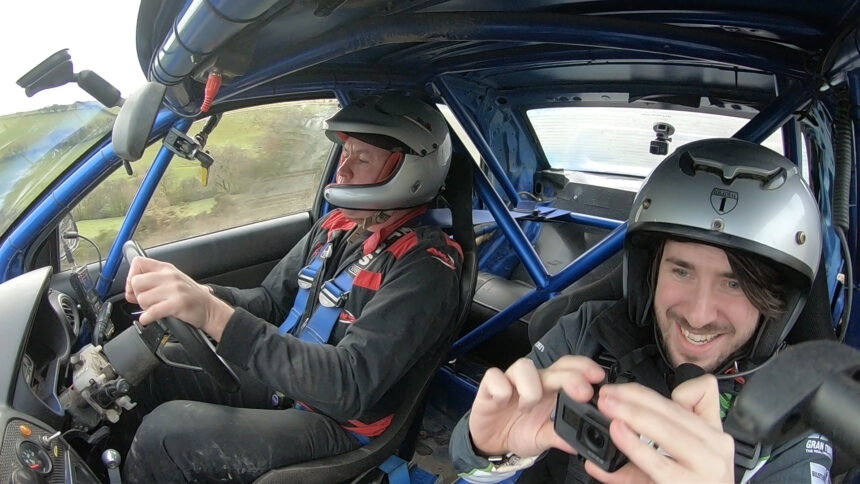 Following on from the McLaren GT4 drive a couple of weeks ago, there was another fantastic real-world opportunity lurking. After having my first hands-on experience with DiRT Rally 2.0, I would be sat behind the wheel of a real rally car. There’s no doubt that I’ve been a very lucky boy recently.

With the DiRT press event taking place at the renowned Phil Price Rally School, it was barely a hop to the car. The car in question was a late ’90s Subaru Impreza, with a locked differential, making it rear-wheel drive. So, a Subaru rally car on a cold, wet day in Wales; if that doesn’t scream rallying, I don’t know what does!

On the face of it, the course was short and simple, but that completely misses the point of it. The long nature of the corners was perfect for learning to control a slide, then exit the corner cleanly and set up for the next one.

In some ways, I was surprised by how natural it felt from the very beginning. For context, I had never done anything like this before. Prior to this, my only experience of this style of driving was in sims, so thank you Richard Burns Rally and DiRT Rally!

Much to my surprise, and indeed great joy, was the praise that came from the instructor! To hear “very natural” was an incredible compliment, along with his apparent surprise that I’d never done anything like this before.

As much as it felt incredibly natural, the instructor’s advice was still vitally important. It was incredibly tempting to nail the throttle, have this amazing, lurid slide, then probably die. “Soft” and “gently” were commonly aired, but the reminder was critical. There was no room to be harsh with the car.

The rutting of the course added another element that I hadn’t really thought about ahead of my second run. The wear and tear meant there was a much narrower line. Get outside of that and the car would understeer. My solution to that was to nail the throttle — as you’ll see, that was a mistake!

What came next put my progress into perspective — a high speed run with an instructor. This was a man that clearly knew the longer course like the back of his hand. To go from sliding at relatively low speed to riding in an Impreza WRX, modified to Group A regulations, was a shock to the system. For a little context, the Mitsubishi Lancer Evo VI that won in WRC was a Group A car.

Two things were evident: the speed and the smoothness. The car seemed glued to the road, despite the wet mud and stones. Hitting upwards of 90mph on a road like that felt insane. The road was barely wider than the car and covered in mud. It was an extraordinary experience that I will never forget. However, seeing that sort of skill on display only fueled my desire to have one last go.

I was determined to put all the advice I was given to good use. I can’t stress enough just how precise my inputs had to be. You had to be so incredibly soft with the car, but especially the throttle. Finding the sweet spot between power and maintaining the slide was so gratifying, just because it was such a narrow margin for error. To finish with more praise from the instructor was incredibly uplifting.

Wanting more can basically sum up these real-world experiences from the last couple of weeks. I desperately want more of them. Knowing that my experiences from sim racing can translate into the real world is such a boon. The praise for my driving at both events has been such confidence boost. It gives me belief to push for more experiences like these, and to better them.

Subaru
6 Comments Discuss this post in our forums...
F1 2020 Review: A Winning Formula