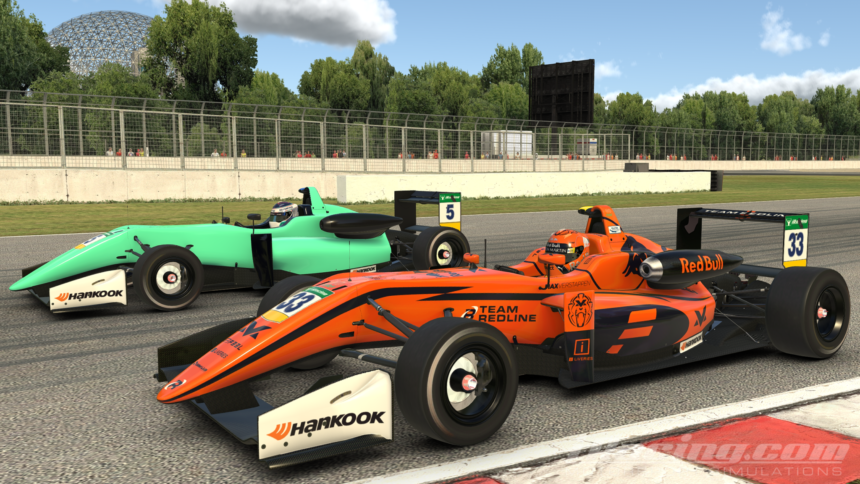 The scene: it’s Sunday, it’s my day off. After a tough 6 hour race at Sebring the day before, I’m trying to rest my aching wrist and giddy head. I’m sitting on TeamSpeak with some friends, relaxing and having a laugh. Then I get a message from Atze Kerkhof (Member of Team Redline): “Would you like to race against Max Verstappen and Lando Norris in an F3 car?”

Perhaps a sign of how off-colour I felt, I didn’t immediately give a positive response. I asked my friends if I should take part, with the general consensus being “why are you still here?” With that, I logged off and told Atze that I’d love to get my butt kicked by some F1 drivers!

This year has already been crazy. My YouTube channel’s growth alone already made it special, and the growth gave me the ridiculous GT Sport FIA GT Championship commentary opportunity. But racing F1 drivers? This was the most surreal event of my year. Picture it; I’m sitting in my rig, which is in a glorified shed, about to take on two 2019 Formula One drivers, with one of them already being a multiple race winner. I mean…what?

Just sitting in the server with their names there was something else. Little did I know that Rudy van Buuren would be there as well. For those that may have missed it, van Buren won World’s Fastest Gamer to become the McLaren simulator driver. So that made two people directly involved with the McLaren F1 team, along with a Red Bull Racing Grand Prix winner.

I had no expectations of being anywhere near them. For goodness sake, they’re in F1 and I’m…me. Of course, I’m pretty decent, but the talent discrepancy between myself and them is huge. They also had the highly unfair advantage of having actually raced in Formula 3! For me, being just 1.6 seconds off Verstappen on pole position was an achievement, despite it putting me last.

Of course, the qualifying lap times already said a lot about the ability of these guys. The race was another demonstration. Trying to keep them in my vision was a huge strain on my mind. The concentration required to keep up, even in the slipstream, pushed me to the ragged edge. I felt like I was at the absolute limit of my ability, just to keep somewhat close.

Some consternation at the Wall of Champions gave me the chance to not be last. Some bunching into the first two corners gave me the opportunity to pull a move and gain a place through positioning myself well. Just gaining a place in that fashion gave me such a boon. For a moment, I belonged with those aliens. Despite that high, the best was yet to come.

On lap 6, something magical happened. Into the hairpin, the call came “slow car ahead”. Max Verstappen had lost it on the throttle. Through bravery and talent alone, I passed his stricken car as he tried to get back up to speed. OK, so maybe not through talent, but I just passed a Grand Prix winner! I didn’t care how it happened, just that it did.

Lap 8 – it all got a little crazy. Verstappen made a move down into turn 8 and I was sure that was probably it, but the slipstream kept me close into the hairpin. Max braked late, I braked a little later but managed to get it stopped. Verstappen clearly braked a little too late as he ran wide, giving me the chance to slide up his inside once again. He had the superior exit, giving him the slight edge down the straight, but I was still able to force him to defend.

Let me repeat that: I forced an F1 driver into a defensive move. Just recalling it makes me beam with joy and shake my head in disbelief. Just for good measure, I made him defend again into turn 1. Max was finally free, but my sim racing year was made.

A couple of tiny mistakes saw me drop to last once again, but that wasn’t the end. It wouldn’t be one of my racing videos unless there was some sort of punt. Who else would it be with but with the other F1 driver in the field, Lando Norris? Coming out of the last chicane, he was sprawled across the track, unmissable.

That completed one of the most ridiculous nights I can ever remember. What an honour!

Formula 1Max Verstappen
9 Comments Discuss this post in our forums...
Can You Beat the Impossible Gran Turismo Quiz?

Gran Turismo Sport 1722 Feb 17 by Andrew Evans
GT Sport‘s first World Tour event of the year is still fresh in our minds, but already it’s time to prepare for the next stage. The Pre-Season for 2020 FIA…