Kazunori Yamauchi in Esquire Mag’s “Man at the Top 2010” 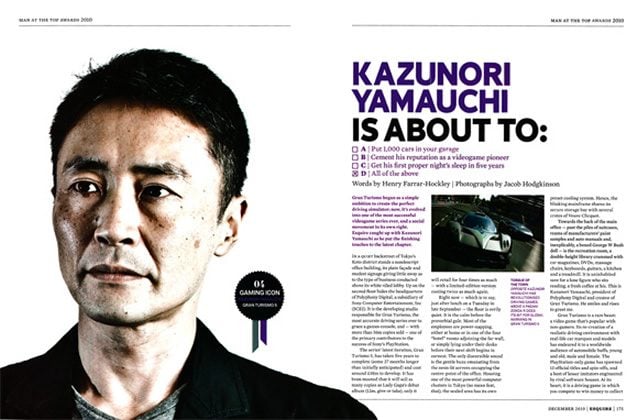 Kazunori Yamauchi has been honored in UK Esquire magazine’s “Man at the Top 2010” awards for his work on GT5 and the GT series. Esquire recognized ten men who “rewrote the future through their works in the past year”, placing Yamauchi alongside some big names, including actor Russell Crowe, “Inception” director Christopher Nolan, Twitter CEO Evan Willams,  Tour de France star Mark Cavendish, and others.

Congratulations to Kazunori Yamauchi for this awesome bit of “mainstream” recognition of his work – it’s always good to read about the GT series outside of the “gaming” media. Thanks to all who sent this in!

AwardsKazunori YamauchiPolyphony Digital
The original comments for this post are no longer available.
GT Sport Brake Light Quiz: Spot the Car from Just the Brake Lights

Forza Horizon 4 0 Jul 2 by Gary Slater
The summer sun has made its grand return to Forza Horizon 4 to begin a fresh week, and a fresh new season. Series 24 officially kicks off this week and, on…

F1 2020 10 Jul 2 by Andrew Evans
With just over a week to go (or less) until F1 2020 arrives, Codemasters has revealed some more information about the variety of features the game will include. We’ve already…

Gran Turismo Sport 199 Jul 2 by Andrew Evans
There’s a rare chance to get your hands dirty in the newest set of GT Sport Time Trials, which start today. Over the next 14 days, you’ll be competing against…

Gran Turismo Sport 1581 Jul 1 by Andrew Evans
The second stage of the official Gran Turismo Sport 2020 FIA Online Championship comes to a close this weekend. That means we’re only a few days away from the third…

Gran Turismo Sport 19 Jul 1 by Jordan Greer
The 2020 Formula 3 season finally begins in Austria this weekend, and with it comes a new chapter for Gran Turismo World Champion Igor Fraga. I thought I knew his…

Forza Horizon 4 8 Jun 29 by Gary Slater
Playground Games has given us a preview of the next update for Forza Horizon 4. After unforeseen circumstances and a technical hiccup disturbed the release of Series 23, the livestream for…