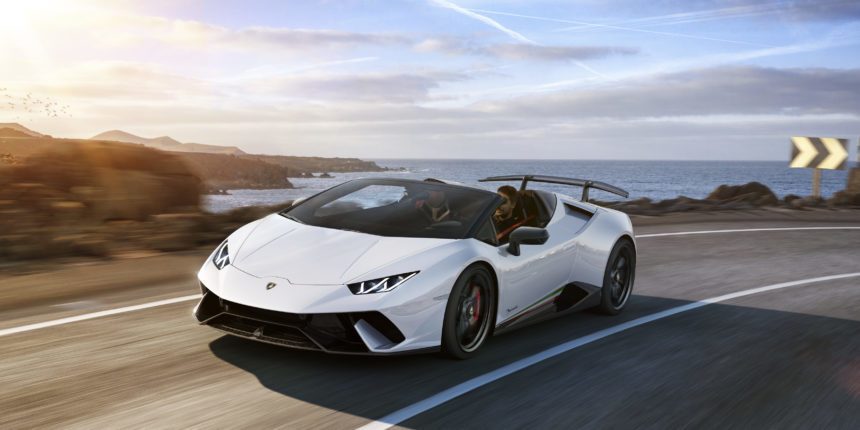 Lamborghini Lifts the Lid on its Huracan Performante Supercar

When Lamborghini set a new Nürburgring record with its Huracán Performante, it was only missing one thing: the open air. The crew from Sant’Agata has rectified this situation with a new Spyder version.

Just like its coupe cousin, the Spyder uses a 5.2-liter, naturally aspirated V10. Packing 630hp and 442lbft, it gives the Spyder the same performance figures as its hardtop sibling. That means 60mph comes up in three seconds, and the soft-top Performante runs on to 202mph.

Like the Gallardo Supperleggera that came before it, Lamborghini’s put the Performante on a diet. Compared to the base Hurácan, it’s 77lb lighter, tipping the scales at only 3322lb dry. The company attributes much of this weight loss to a combination of carbon fiber and forged composites. The latter makes up the front and rear spoiler, engine cover, rear bumper, and diffuser.

The Spyder also carries over the tin-tops trick Aerodinamica Lamborghini Attiva (ALA) system. According to Lamborghini, the Spyder’s soft-top doesn’t compromise ALA’s effectiveness either.

Pretty much everything else from the coupe’s spec sheet is carried over wholesale. An improved suspension system, recalibrated driving aids, the ANIMA driving-mode selector — it’s all here.

That party piece electrohydraulic roof can be operated at speeds up to 30mph. It isn’t quite as quick as the rest of the Hurácan, but it’ll still stow away in 17 seconds. When the fabric’s out of sight, two fins pop out from the rear deck, echoing the roofline from seatbacks to tail. There’s two ducts on the fins to reduce turbulence, and a pair of wind guards Lambo promises allows conversation “even at high speeds.” Not that we imagine that’s a high priority for some buyers, but it’s good to know nonetheless.

If you want one — and why wouldn’t you — Lamborghini will take $308,859 from you for the privilege. It expects first deliveries in the summer.

Geneva Motor Show 2018Lamborghini
5 Comments Discuss this post in our forums...
Can You Beat the Impossible Gran Turismo Quiz?