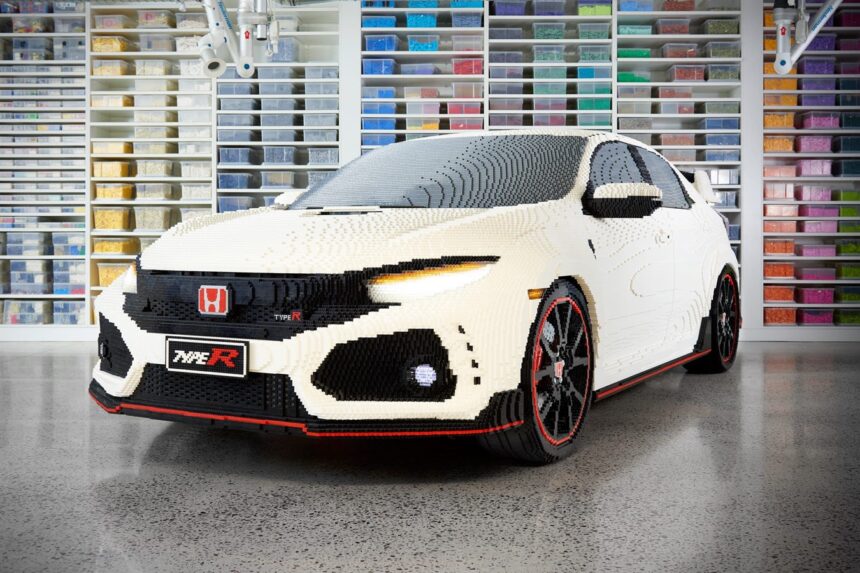 When it comes to big boys’ toys, there’s not much that can match a life-sized car built entirely out of LEGO.

Step forward LEGO-certified professional builder Ryan McNaught, and the Honda Civic Type R. McNaught has put together a 1:1 replica of Honda’s Ring-smashing hot hatch, in one of the most extensive LEGO builds we’ve ever seen.

It perhaps doesn’t quite match the working interior of the LEGO Senna, or the working engine of the LEGO Chiron, but the 320,000-brick Civic is more LEGO than either. In fact apart from a supporting steel frame — common on all builds of this size — it’s almost 100% plastic bricks. That said, they are all stuck together with the dreaded Kragle…

McNaught and a crew of nine hand-built the car over 1,300 hours for a television show. “LEGO MASTERS”, sponsored by Honda, airs on Australia’s Channel Nine from April 28, and it’ll feature competitive building in the medium of LEGO bricks. Eight pairs of the Danish building block toy’s biggest fans will go head-to-head in a build-off. McNaught will act as judge on the show, which Hamish Blake hosts.

In addition to the LEGO body, the Civic Type R sports a full, working set of lights. By use of an iPad, you can turn on the headlights, indicators, brake lights, fog lights and daytime running lights. Surprisingly, the whole rig comes in at 2,865lb — slightly lighter than the real car.

“We’ve loved the challenge of this project. The car is shaped with a considerable amount of curved lines, making it a tough but interesting build. From the working lights and indicators to intricate LEGO® Honda logos, the detail on the model has been a fun one for us to work on.”

HondaLego
12 Comments Discuss this post in our forums...
F1 2020 Review: A Winning Formula