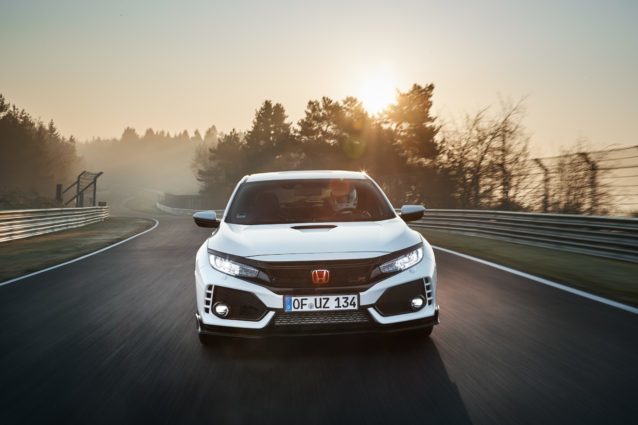 If you’re serious about your new performance car, it needs to have a Nürburgring lap time under its belt, and the new Honda Civic Type R is no exception.

Revealed only last month at the Geneva Motor Show, Honda’s newest car to wear the red R — now in its 25th year — has been pounding in the development miles at the Green Hell to ensure that its on-road performance is as you’d expect it to be.

The new model differs substantially from the current vehicle in a number of ways. Most obvious is a new body, which turns the Civic from its traditional hatchback body into more of a liftback — though it remains a five-door car. The 2.0-litre, turbocharged straight four engine produces another 10 hp, bringing it up to 316 hp and 295 lb-ft. 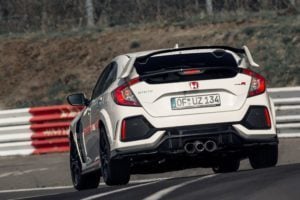 A weight-loss program has seen 35 lbs shaved from the body frame alone, but a 38% increase in torsional rigidity sees enhancements to the cornering performance, along with new multi-link rear suspension. The six-speed manual transmission has lower gear ratios to improve the car’s acceleration, and a revised aerodynamic package delivers what Honda claims is a best-in-class balance between lift and drag.

All in, this lead to a development car — “with technical specifications representative of the final production car” — posting a dry lap time of 7:43.8, seven seconds quicker than the outgoing car and the quickest recorded Nordschleife time by a front-wheel drive production road vehicle.

“The cornering speed achieved in the new Type R is higher because the car features a wider track and tires, a longer wheelbase, new multi-link suspension in the rear and optimized aerodynamics that improves stability. For example, drivers typically enter the corner after Metzgesfeld at around 150 km/h (94mph). Even at this medium-speed corner, the speed is around 10 km/h higher due to the new Type R’s excellent stability. So, with improved cornering performance, we can increase the speed throughout the lap, helping the new Type R to achieve a much quicker lap time.”

Those keeping score will note that there are no officially recognized lap records for the Nordschleife. The development car in question had a roll cage installed for safety reasons (with the extra weight compensated by temporary removal of the infotainment system and rear seats) and used road legal, track-focused tires, but the time is impressive nonetheless.

Production of the car will officially begin in summer 2017 at Honda’s Swindon factory in the UK, and it will become the first Honda-badged Type R model ever to be officially sold in the USA when it arrives in North America next year.

Andrew Evans · Apr 24, 2017· Comments
Gran Turismo series partner Toyota has revealed a special, limited edition version of its Toyota Yaris hatchback, which not only bears the Gran Turismo 7 name but comes with a free copy of the game and a PlayStation 5 console.

Andrew Evans · Apr 24, 2017· Comments
After it surprisingly revealed a new car at the Consumer Electronics Show (CES) in 2020, Sony has taken the covers off a second model at this year’s show — and it looks like it might be planning to build them.

Andrew Evans · Apr 24, 2017· Comments
Porsche has officially taken the covers off its Vision Gran Turismo car, designed specifically for Gran Turismo 7 when it launches on March 4.

Andrew Evans · Apr 24, 2017· Comments
MG’s specialist design center, SAIC Design in London, has created a new concept car that’s not only inspired by gaming, but a games room itself.

Michael Leary · Apr 24, 2017· 13 Comments
Although Lamborghini has now officially pulled the wraps off its latest nostalgia project, the Countach LPI 800-4, you’re already too late to buy one.

Andrew Evans · Apr 24, 2017· 21 Comments
Genesis has unveiled a trio of new racing car concepts designed in collaboration with Gran Turismo, destined to take their places in the racing game series in the near future.

Andrew Evans · Apr 24, 2017· Comments
Nissan has taken the covers off the latest model of its flagship performance car, the GT-R Nismo, ahead of its market launch later this year.