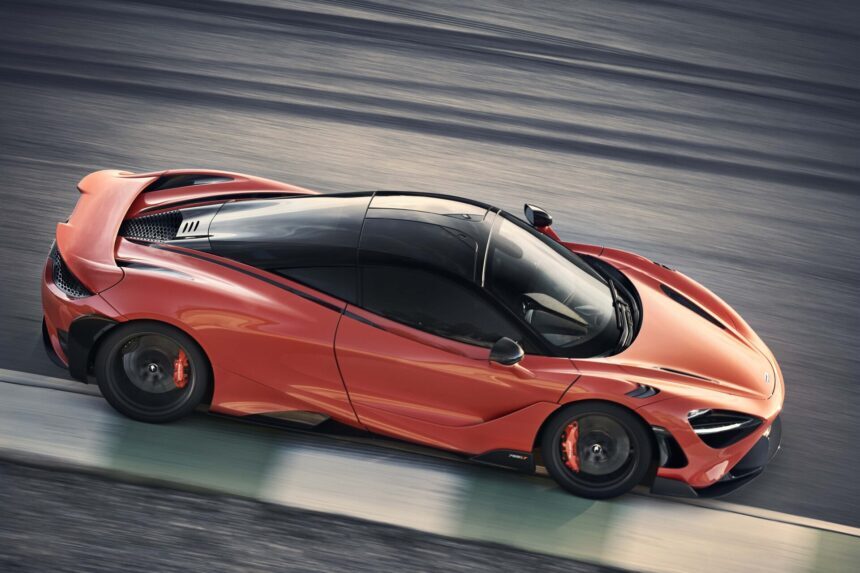 McLaren has revealed the latest model in its “Long Tail” family, this time based on the car at the very top of its Super Series model line, the 720S. It calls it the 765LT, and the clue to its new characteristics is in the name.

To create the 765LT, McLaren has first boosted the power somewhat. The four-liter V8 remains, but has seen some revisions. There’s new, forged aluminum pistons specific to the 765LT, along with the triple-layer head gasket from the McLaren Senna version of the engine. McLaren has tweaked the engine management and both the fuel and oil pumps too.

You’ll notice from the rear shots that the 765LT gains a new exhaust system. This full titanium exhaust has slightly different routing, ending in four tailpipes rather than just the two, with titanium valves to allow for a slightly quieter sound at low speeds.

However the changes don’t end there. McLaren has gone over the car with a fine-tooth comb to shed as much weight as it possibly can. That exhaust system alone results in 8lb (3.7kg) of weight savings, but it’s only a fraction of the 765LT’s diet.

The 720S already uses a full carbon fiber chassis, but the 765LT employs much more of the material. New body parts — from the new aero parts to the floors and side skirts — are all carbon fiber, and buyers can specify a carbon fiber hood and fenders. The upper section of the doors are carbon fiber too, with fully carbon fiber doors as an option.

But McLaren has gone even deeper. The center tunnel is a carbon composite that’s just 1/32″ (0.8mm) thick, while each of the optional carbon fiber racing seats, made using a new process, are nearly 20lb (9kg) lighter, including a 4lb (1.7kg) lighter shell. A lithium-ion main battery saves another 6.6lb (3kg), and new forged wheels cut 48lb (22kg) of all-important unsprung mass.

If that’s not nerdy enough, the 765LT sports polycarbonate rear screens and a thinner windscreen. McLaren has even dug into the gearbox and replaced the standard final drive gear with an F1-grade nickel-chrome item.

The 765LT gains 1.9 inches (48mm) at the front thanks to a revised front end with a new splitter. That’s also closer to the ground, as McLaren has dropped the nose by 0.2 inches (5mm) to increase vehicle rake for even more front downforce — though thankfully McLaren still fits the nose lift function to save embarrassing car park moments. Front track is also 0.2 inches (6mm) wider to improve front-end grip.

At the rear, the new wing lengthens the car by 0.4 inches (9mm). It sits considerably higher than in the 720S, and has new deployment settings specific to the 765LT. A DRS function trims the wing to reduce drag in a straight line, while the high-speed braking function pops up as an airbrake in half a second, improving rear downforce by 60% under heavy braking. The driver can also manually raise the wing with a button in the cabin.

Unusually, and likely due to the increase in overall downforce, the 765LT is 6mph slower in a straight line than the 720S. You’ll want the regular car for any standing mile tests, but the 765LT will be the faster point-to-point machine.

McLaren hasn’t revealed any pricing just yet, but expect something in the region of $350,000. That’ll be buoyed somewhat by the limited nature of the car, with McLaren only planning to build 765 examples. The first will hit the streets towards the tail end of 2020.

“The 765LT is the most accomplished and exhilarating LT model ever from McLaren Automotive. Incredible performance and astonishing levels of driver engagement – the result of hundreds of detailed engineering actions undertaken to ensure the purest possible connection between driver and car – are the stand-out attributes of an LT developed with single-minded determination to deliver a wholly immersive driving experience to those who secure one of the 765 available to customer order.”