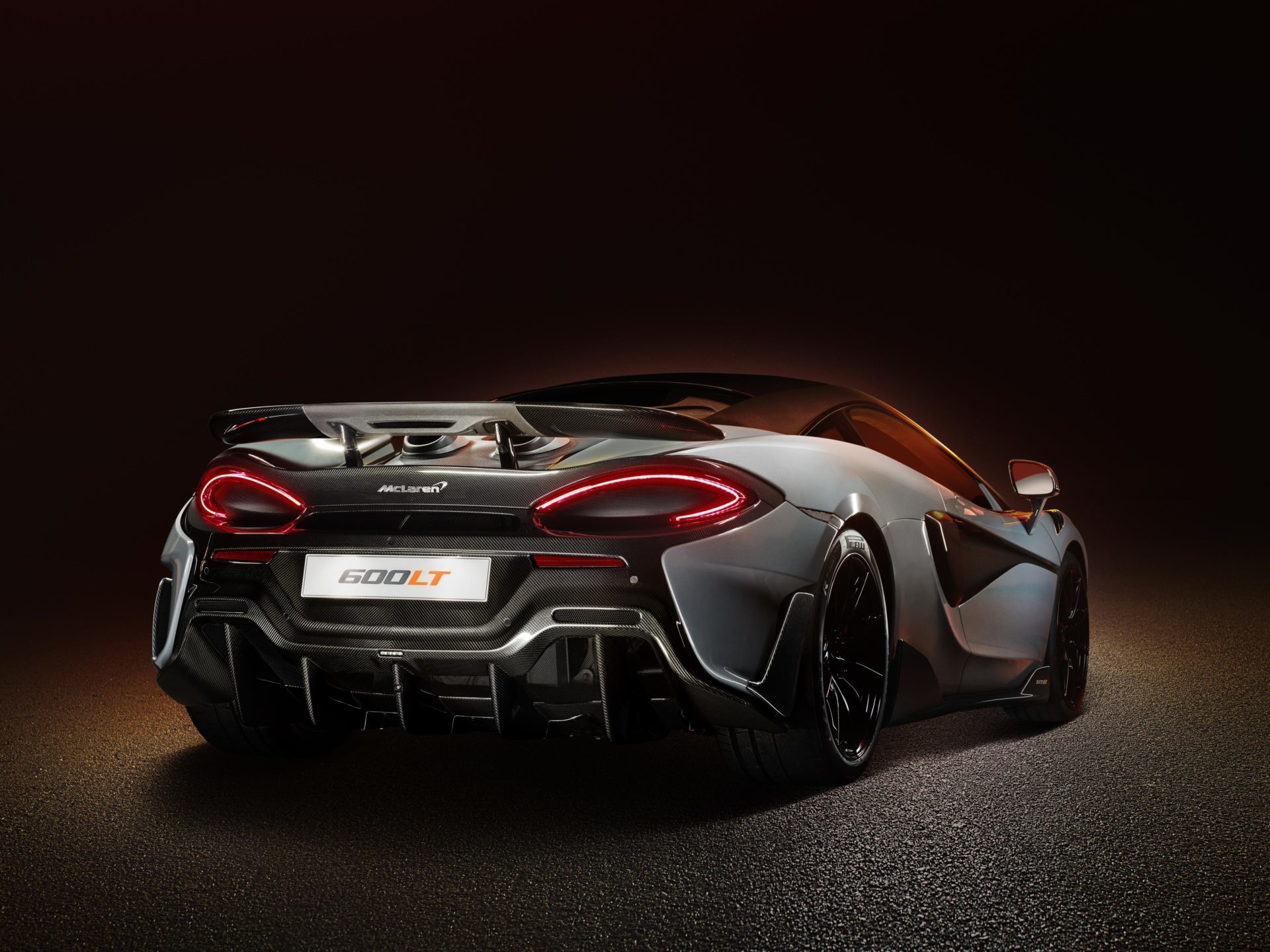 McLaren has unveiled its fourth ever car in the “Longtail” (LT) line.

The limited edition car builds on the brand’s entry “Sports Series” chassis, as you’ll find in the 540C, 570S and 570GT models. Named “600LT“, it takes cues from the 675LT models and, of course, the original McLaren F1 GTR Longtail.

Compared to the 570S Coupe, the 600LT has roughly 25% of new components. The changes start at the rear, with an extra three inches of bodywork to give the Longtail a justified name. This includes a new fixed rear wing and diffuser to increase rear downforce. These work with a new front splitter to improve overall downforce generation. 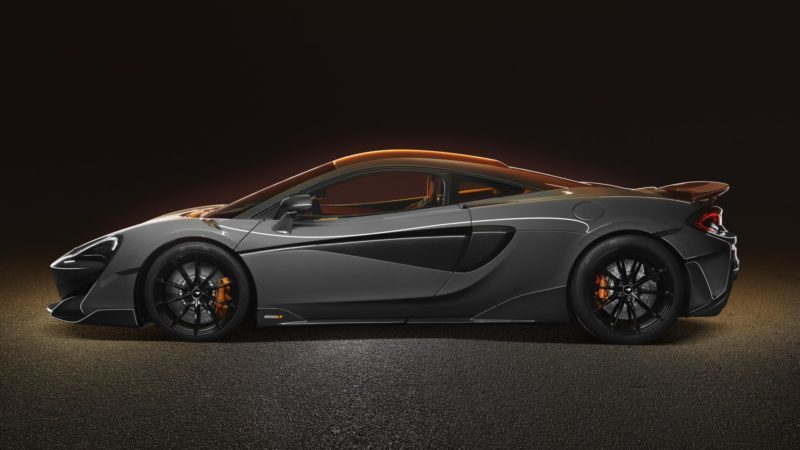 The car’s carbon fiber monocoque remains, but McLaren uses new carbon fiber body panels for the 600LT. These contribute to more than 200lb of weight saving over the 570S, which should translate to a curb weight around 3,060lb — roughly the same as a diesel Volkswagen Golf. Even more weight reduction is available through the MSO service, with customers able to specify the McLaren Senna’s lightweight carbon fiber racing seats, or a carbon fiber roof.

Power still comes from McLaren’s in-house 3.8-liter, twin-turbo V8. It’s more powerful than before, of course, with 592hp and 457lbft representing a 30hp and 14lbft hike. With 433hp/ton, it should be enough to drop the car’s 0-60mph into the twos, although top speed is unlikely to change much due to the extra aero devices. 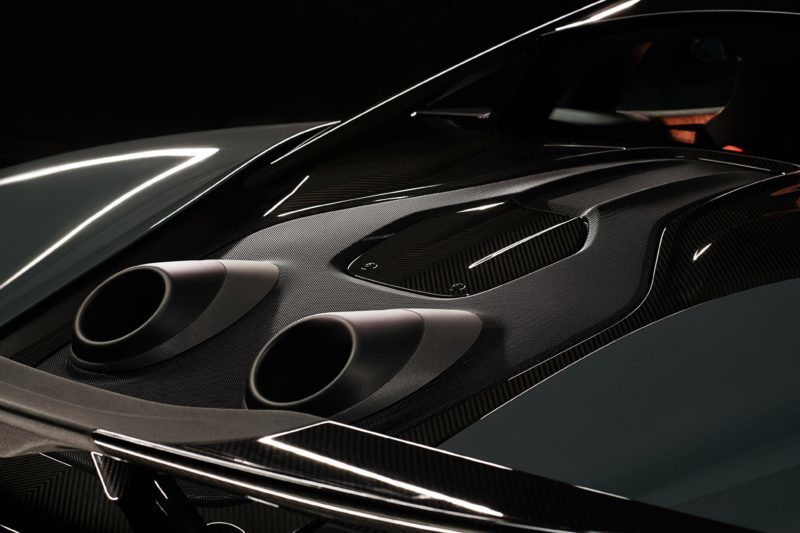 Adding to the 600LT’s unique looks is a pair of top-exit exhausts. Reminiscent of the triple exhaust on the McLaren Senna, McLaren says it’s shorter and “even more extreme” than the system on its current halo car.

There’s more work under the skin though. The 600LT features a new, lightweight braking system carried down from the Super Series 720S model. The 720S also donates its forged, aluminum double-wishbone suspension. McLaren also equips it with unique Pirelli P Zero Trofeo R tires, to make the most of the changes. 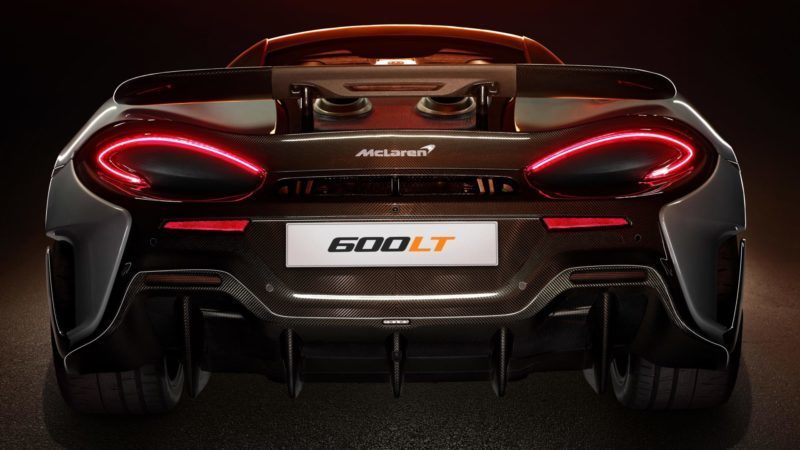 In addition, McLaren offers a Pure McLaren track day experience, with driver training to help you get the most out of the car. That’s included in the LT’s £185,500 list price.

Although McLaren intends the car to be a limited edition, it hasn’t yet stated production numbers. It will start making the cars, by hand, in Woking in October 2018, and continue for around 12 months. While McLaren revealed the car as a coupe, the previous LT — the 675LT — was available as both coupe and spider, so a convertible option may be available in the future.

“The McLaren 600LT is only the fourth ‘Longtail’ McLaren in more than two decades. The McLaren F1 GTR ‘Longtail’ that began the lineage was one of the purest race cars in modern motorsport history. The 675LT resurrected the revered name, creating the purest distillation of the sheer driving pleasure embodied by all McLaren cars. Now we are further extending our very special LT family –albeit in limited numbers – and once again showcasing the ethos of optimised aerodynamics, increased power, reduced weight, track-focused dynamics and enhanced driver engagement that are the hallmarks of a McLaren ‘Longtail’.”