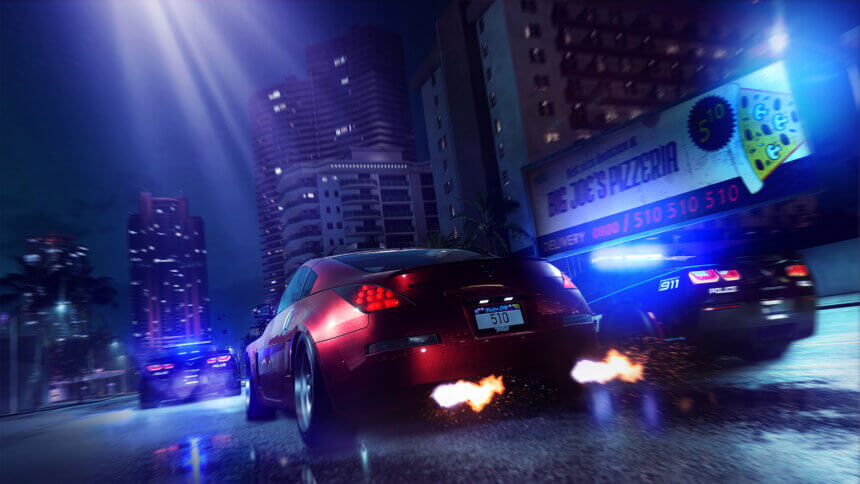 Fans hoping for another look at the next game in the long-running Need for Speed series may not have all that much longer to wait. Something — although we’re not quite sure what — is due to happen next Monday, October 5.

The official Need for Speed social media channels have been teasing this date throughout today. Firstly there was a shot of a Nissan 350Z from Need for Speed Heat bearing a “510” license plate, and a background sign with multiple uses of the number 510. Then came a screenshot of the car, with a Heat Level of five, and ten chasing police vehicles.

That all rather pointed towards the magical date of October 5, in the international date format favored outside the USA. New, or rather returning, Need for Speed developer Criterion is, of course, based in Guildford in the UK. Sure enough, the official Need for Speed site updated earlier this afternoon to give a countdown page, with the timer set to expire at 1500 UTC on October 5.

Of course “510” has somewhat of a double, or even triple, meaning in this instance. As made famous by myriad car action films set in California, and specifically Los Angeles, “510” is the police radio code for “speeding or racing vehicles”, which rather suggests that whatever this page is teasing it’ll involve police chases.

The triple meaning comes from the title of a previous game. Need for Speed Most Wanted 5-1-0 was a PlayStation Portable-specific release that accompanied the 2005 Most Wanted release on other formats. Criterion Games also developed the 2012 quasi-reboot of Most Wanted.

We’ve already seen a glimpse of what the next Need for Speed title will offer, courtesy of a brief clip during June’s games presentation from EA. Hopefully by Monday lunchtime we should know quite a bit more.

Update: The official Need for Speed YouTube account has now posted this video, set to start at 1500 UTC on Monday, October 5:

Gaming 28 Apr 8 by Andrew Evans
If you’re one of the tens of millions of gamers who have been trying — and failing — to get hold of a new-generation console over the last six months,…