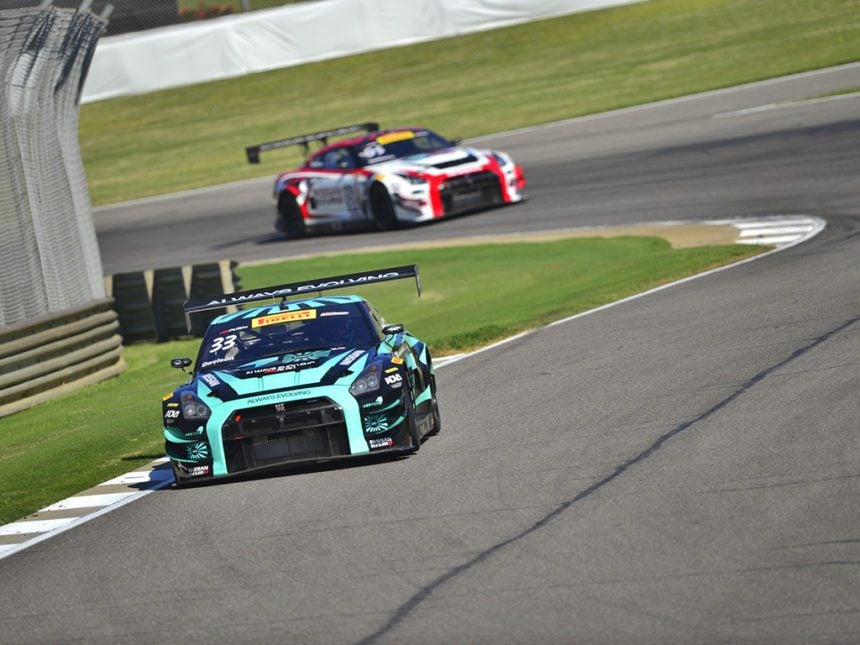 This season of the Pirelli World Challenge has had no shortage of excitement. For 2011 GT Academy grad Bryan Heitkotter and teammate JD Davison – both behind the wheel of a NISMO GT-R GT3 in the top GT class – it started strong. The big Nissans were well-suited to Circuit of the Americas, enabling Heitkotter to nab silver in Round 1, with Davison close behind in 4th. Sadly, complications during the second race of that first weekend pushed them down to 19th and 13th, respectively.

Florida’s St. Petersburg street circuit provided a similar set of results for Rounds 3 and 4 the next weekend. While the team saw middling results Saturday, Davison claimed the middle step of the podium on Sunday behind the dominant Porsche 911 of Michael Lewis.

A single round at the venerable Long Beach street circuit was a rollercoaster of an event, appropriate for an area that housed the historic Cyclone Racer ride. The tight, hair-under-2-mile circuit favoured the Cadillac ATS-V’s of Johnny O’Connell and points leader Michael Cooper. Alvaro Parente placed his #9 K-PAX Racing McLaren 650S GT3 at the top of the pile in qualifying, but couldn’t hold off a hard charge from O’Connell that displaced him from the top spot at the beginning of the race.

The walled-in circuit doesn’t play to the strengths of the Nissan racers, but Davison and Heitkotter nonetheless secured 11th and 13th in qualifying. Unfortunately for Bryan, a visit with the tire wall on the far side of Turn 1 cut his run short only 1/3 of the way through the race. Davison faired better, leapfrogging most of the pack from his sixth-line start to finish fourth.

In the end, O’Connell would be hit with a post-race 10-second penalty, which gave Parente the win (his first in the series). Cooper looked to have a top five finish in the books, matching teammate O’Connell as the only drivers to dip below the 1:20 mark during the race, but a late-race accident put him out of contention. Third went to Round 1 winner Patrick Long in the #31 Porsche 911 GT3, while Canadian Kyle Marcelli wrapped up the top five in an Audi R8 LMS.

Rounds 6 and 7 took place at a track far removed from the flat, restrictive streets of California: the under-rated Barber Motorsports Park in Alabama. After showing serious speed at Long Beach, Michael Cooper topped the qualifying charts on Saturday, setting a new class record to start at the top of the grid, with Parente in second in the McLaren.

The GT-R’s of Davison and Heitkotter would start mid-pack, with Davison taking the #33 car from eighth to fourth in the first lap, a spot he would stay in for the remainder of the race, earning a reward in the process. Meanwhile, the #05 car stayed on its sister-car’s tail for most of the event, only succumbing to Round 1 winner Patrick Long’s 911 GT3 R near the end of the race. Alvaro Parente emerged victorious against the hard-charging Caddies of Cooper and O’Connell, earning his second win in as many rounds – without a post-race penalty against a competitor this time, to boot!

Qualifying for Round 7 was a similar story: Parente’s K-Pax 650S would lead the inside line, with Cooper beside him. O’Connell was third again, with the 911 GT3 R of Michael Lewis filling the second row. Bryan would lead the NISMO charge from fifth, with Davison close behind in ninth.

Mirroring the start of Saturday’s race, Cooper and Parente again raced towards T1, with Cooper now being the one to snatch the lead through the outside line. With a Cadillac/McLaren sandwich up front – O’Connell remaining consistent in third – Patrick Long leapt past Bryan and teammate Michael Lewis to hold onto fourth. Lewis and Heitkotter would remain in place for the remainder of the race, finishing in fifth and sixth.

JD Davison was engulfed in a stiff fight mid-race, alongside the #2 Audi R8 LMS Ultra (Kyle Marcelli), #87 Bentley Continental (Andrew Palmer), and #76 911 GT3 R (Andrew Davis). NISMO power would eventually win out, with the #05 car securing eighth as the final flag dropped, with only Adderly Fong’s Bentley separating the GT-R’s.

Parente and Cooper battled throughout the race, both posting fast laps dipping under 1:24 (the only two cars to manage the feat in Round 7). Coming up on lapped traffic helped close the gap for Parente, but it wasn’t enough, as Cooper secured his first win of the season by less than a second, with Cooper only a half-second further back in third.

With the season 1/3 of the way over, the points race is heating up. A quick recap of the top ten:

As mentioned earlier, the next round is right here in Canada, at Canadian Tire Motorsport Park. The Pirelli World Challenge arrives there May 19, running through to May 22. It’s certainly shaping up to be a big weekend, in more ways than one!

Automotive News 58 Apr 5 by Andrew Evans
Toyota has taken the covers off its replacement for the nine-year old 86, which sports a familiar name with one important difference. The car is now called the GR 86,…