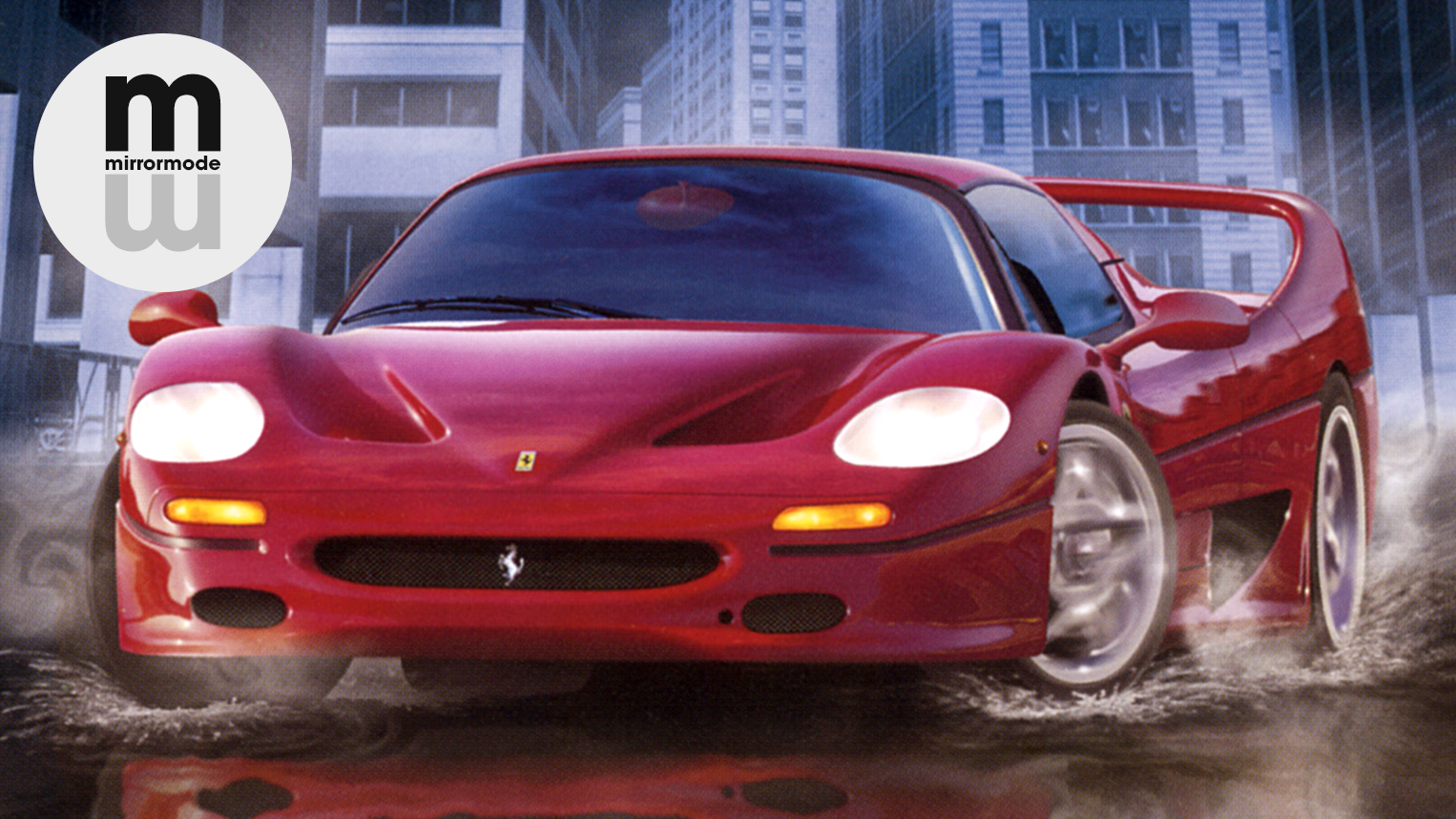 Forza Horizon 4 debuts today. Like so many of you, I’ve been impatiently awaiting the game since Playground revealed it at E3. Forza Horizon is the behemoth of arcade racing, and I love my arcade racers dearly.

However, there’s something that makes the Horizon brand different from its contemporaries. In six short years, Playground Games has perfected the formula for a universally beloved racing experience. Forza Horizon 4 is all things to all kinds of enthusiasts. It rejects the notion that accessibility should come at the expense of quality or depth. It breaks down barriers.

In those ways, it’s not terribly dissimilar from another revered racer of Xbox’s heyday. No, Project Gotham Racing never benefitted from hundreds of customizable vehicles, a vast open world, or establishing shots of a bustling music festival. But it challenged the notion of what racing games could be all the same.

The history of Project Gotham Racing is a strange one. An oddly-named racer with an almost anti-racing premise, PGR’s approach to driving was as much about style as substance. It felt fresh — but ironically, it wasn’t original.

Those who picked up a copy of PGR along with an Xbox during the system’s launch in November 2001 (or March 2002 in Europe) may not have known they were in fact buying an enhanced rendition of a Dreamcast title that never garnered the attention it deserved: Metropolis Street Racer.

Both MSR and PGR were developed by Bizarre Creations, a studio that made a name for itself with Formula 1 and Formula 1 97 on the original PlayStation. Legend has it that Sega was quite impressed with those F1 titles, and set about poaching the talent responsible to create a racer for what would be its final console.

The only trouble was, Sega didn’t know the studio’s name. So at a trade show, one of the company’s producers reportedly unplugged a PlayStation demo unit running F1 97 just to see Bizarre’s logo appear when the system rebooted. It wouldn’t be long before the two parties inked a deal.

MSR eventually hit shelves in Europe in November 2000, and then in North America in January of the following year. Within weeks, Sega discontinued the Dreamcast, which also put the brakes on game’s localization for the Japanese market. Thanks to flagging system sales and a lengthy and troubled development, MSR’s chances were functionally doomed before the first disc was pressed.

It was a tough pill for director Martyn Chudley and his team at Bizarre to swallow, given the unprecedented nature of the project. MSR contained three cities — San Francisco, London, and Tokyo — reconstructed with painstaking attention to detail. The team captured an estimated 32,000 photographs, 30 hours of video, and used tourist guides and maps as reference to ensure the environments were as accurate as possible. MSR featured a day-to-night cycle synced to the Dreamcast’s internal clock — meaning if it was midnight in Tokyo in real life, it’d be midnight in Tokyo when you went there in the game.

The whole thing was enormously ambitious. As Chudley put it to Edge in 2001, confining MSR to the Dreamcast was like “The Beatles exclusively selling The White Album on Mars.”

Fortunately, it wouldn’t be stranded there for long.

“At the time, Microsoft was making noises about the launch of the Xbox,” Chudley told Edge in 2006, “and we approached them to see if they would be interested in an open-wheel racing game that we had an inkling of a design for. However, they seemed far more impressed with the game we had just released, and, as we had rights to everything bar the name, Project Gotham Racing was born from the ashes.”

Chudley estimated in that same interview that PGR outsold MSR 16 times over. Of course, being tied to the Xbox — and Halo — was a huge reason why, but it would be foolish to suggest that PGR was simply MSR ported to the right console at the right time.

True, practically everything that defined Bizarre’s Xbox debut first appeared in its Dreamcast swan song. However, the studio still found ways to refine the game’s core gameplay mechanisms, polish everything up, and add a ton of content.

PGR got an extra city in the form of New York. Although its car roster was smaller than MSR’s, the models themselves sported higher polygon counts and the game greatly benefitted from the addition of Ferrari and Porsche. A licensed soundtrack of more than 60 songs, containing the likes of Good Charlotte, Gorillaz, and The Chemical Brothers, replaced the cheesy top-40 stylings of Sega’s internal musician, Richard Jacques.

Like MSR, PGR was built on the Kudos currency that awarded points for skillful maneuvers, like drifting, overtaking competitors, and the like. But PGR mercifully dropped some of MSR’s more head-scratching progression quirks, like subtracting Kudos for crashing. PGR also ditched MSR’s counterintuitive garage system, whereupon selling a car would cost you a percentage of the Kudos you earned with it — a frustrating wrinkle to the rules that served no obvious purpose.

Bizarre streamlined PGR’s single player experience through the addition of bronze, silver, and gold medals tied to different Kudos goals. Once again, the player could increase their Kudos payout by committing to finish in a higher position in a street race, or lowering hot lap targets. Unfortunately, in a carryover from MSR, time trials still required players to estimate how quickly they’d be able to do a lap before starting the challenge, down to tenths of seconds. Project Gotham Racing 2 mercifully did away with that guessing game, but at least PGR’s start menu was considerate enough to give you a restart button — something MSR’s didn’t.

The list of improvements goes on. Cone Challenges presented a thoughtful new game type that was both enormously addictive and a refreshing change of pace from standard races. (Funnily enough, while doing research for this story I counted no less than three reviews that compared this mode to Tony Hawk’s Pro Skater.)

Although it may have been a good idea in theory, MSR’s insistence on tying real-world time to in-game cities was irritating in practice. If you happened to play the game around the same time every day, the locales would reflect that. As a result, I’m not sure I ever had the opportunity to roam the streets of London in the sunlight in MSR, but thankfully PGR got rid of that restriction.

Finally, the Xbox afforded a number of technical enhancements the Dreamcast simply didn’t have the horsepower to pull off, like 60 frames-per-second gameplay, damage and reflections on cars, better lighting and more impressive draw distances. Hands down, this was one of the greatest looking racing games of its day.

It was also one of the best handling, too. PGR was the title that for better or worse crystallized the term “simcade.” Most cars have a predisposition to kick the tail out and get airborne, no doubt in an effort to encourage players to score as much Kudos as possible. But while PGR’s physics are exaggerated, they still require your full attention. Weight transfer is palpable, and there’s a tangible sensation between your tires and the asphalt that MSR lacked. To that end, the Xbox controller’s built-in rumble certainly helped things.

Although PGR was in many ways the game MSR should have been, it also left room for improvement. Later installments capitalized on those opportunities.

Project Gotham Racing 2 massively inflated the car roster to include everything from SUVs, to classic American muscle, to experimental track day fare. It also brought 10 cities over the previous four, plus the Nürburgring Nordschleife, marking the Green Hell’s first appearance in a racing game. The Kudos system was further fleshed out and made a little more forgiving, and the notable addition of Xbox Live during a time when online multiplayer was still in its infancy made for one of the most exciting racers of its generation.

Project Gotham Racing 3 and 4 benefitted from further technological leaps, such that it’s unfair to criticize the original for its deficiencies. Well, perhaps except for its maddening AI.

Computer-controlled drivers in PGR move through the world with all the spatial awareness of a bull in a china shop. It’s less of an issue during the opening stages of the campaign when the game doesn’t entrust you with anything seriously fast. But in the final chapters, you can expect many first corner pileups, and a whole lot of restarting. It’s the only major issue that stands in the way of properly enjoying the game today.

It’s a testament to Bizarre’s body of work that the first Project Gotham Racing‘s successors quickly overshadowed it. In revisiting the game, I’m confident now more than ever that it’s one of the greatest racers ever to launch a platform.

PGR pushed an estimated 2.5 million copies, good enough for fifth on the Xbox’s all-time sales list behind both Halo titles, Tom Clancy’s Splinter Cell and Fable. It’s the racing game that gave Xbox owners a feather in their cap against Gran Turismo 3, which for all its excellence lacked highly demanded features like damage, online play and, of course, the presence of Ferrari and Porsche. In a world before Forza Motorsport, this series was a pretty big deal.

It was also tremendously accessible. PGR forced players to think about driving in a different context, beyond jostling for position and the kind of repetitive three-lap-fare that dominated the space. It channeled lessons learned from the success of extreme sports titles, packaged that with a confidence-inspiring handling model that gave players the tools to pull off stuntman-esque feats of car control, and boasted the kind of production values that demonstrated what Microsoft’s hardware was really capable of.

It’s a legacy that makes the studio’s demise nearly a decade ago an especially tragic one.

We’ll probably never see another Project Gotham Racing, but you can surely feel its spirit in so many of the games we enjoy today. Driveclub was pretty much PGR taken outside of city centers, and comparisons to Forza Horizon practically speak for themselves. PGR may not have had the Horizon Festival going for it, but it did have radio stations with real DJs at the helm. And in another telling similarity, all three of the aforementioned franchises allowed players to drive in Edinburgh at one time or another.

But if you could strip all the commonalities down to one mantra, one ethos, it’d probably go a little something like this:

“It’s not about how fast you drive, but how you drive fast.”

Special thanks to this MSR blog and Tom Charnock over at The Dreamcast Junkyard for their extensive coverage and preservation of the game’s history, which greatly informed the research behind this Mirror Mode.