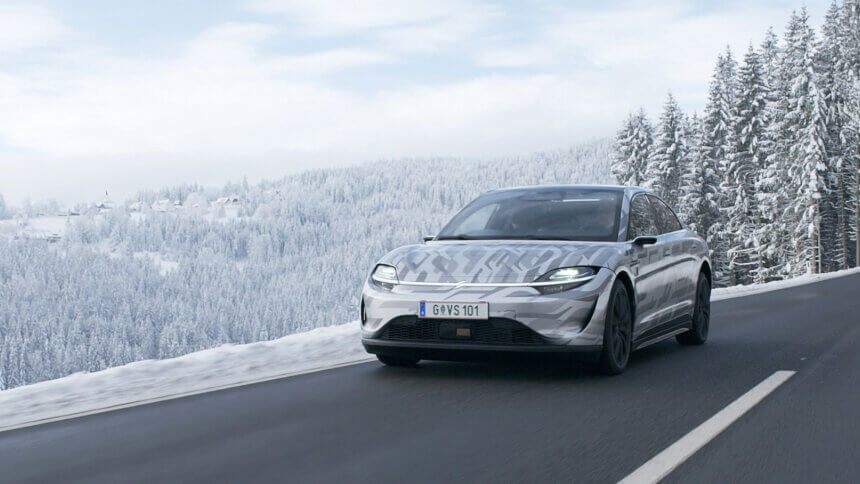 Sony’s Vision-S Prototype, the vehicle it revealed at last year’s Consumer Electronics Show (CES), appears to be on the path to production as it enters a road-testing phase of development.

The Vision-S came as a bit of a surprise at CES 2020. CES is usually all about new phones, televisions, games consoles, cameras, and all manner of gadgets — fields with which you’d firmly associate Sony. Cars are not something that usually pop up, and Sony has almost no link to the automotive sphere, other than its in-car entertainment offerings, so it was pretty unexpected.

Nobody really expected the car to become a real vehicle that people could buy and drive either. Automotive development is an incredibly expensive affair, with estimates in the region of $1bn for a car manufacturer to bring a whole new platform to market, thus it seemed like the Vision-S was more of a showcase of Sony’s sensor and AI technologies.

However, as a video released for this year’s CES shows, Vision-S is now in a road-testing phase. The sequence starts at a test facility at the Magna Steyr factory — which builds the Toyota Supra and Jaguar I-PACE — in Graz, before leaving it behind and heading out on public roads into the Styrian mountains beyond.

Magna is one of several partners for the project, which has grown to include several significant companies in the automotive supply chain including Bosch, Continental, and ZF. As the car majors on autonomous driving, connectivity, and occupant comfort and entertainment, it should come as little surprise there’s myriad partners in these fields too.

With so many other companies now on board and a full, driveable prototype making its way around Europe’s roads, it seems like the Vision-S is a serious attempt from Sony to create a production car after all.

As for the car itself, it remains a pure electric vehicle, with a pair of 200kW (268hp) electric motors driving one axle each. The battery pack is around 125kWh, although Sony has yet to confirm either battery capacity or vehicle range, but with 536hp and all-wheel drive it should be a pretty quick machine.

For 2021, Sony has updated the Vision-S to include more sensors than before — 40, rather than 33 — to increase the breadth of functions. That includes not only vehicle position monitoring with Lidar, radar, ultrasonic sensors, and cameras, but cabin monitoring too. There’s apparently also a PlayStation console on board…

Sony Vision S
102 Comments Discuss this post in our forums...
Test Your Badge Knowledge With Our Car Logo Quiz