It’s tough to believe it, but as of today the Sony PlayStation has been around for an incredible quarter of a century.

Sony launched the original PlayStation console on December 3 1994, initially only in Japan. It was a project that originated out of a partnership between Sony and Nintendo to develop a console based around CD-ROM technology. However the relationship between the two brands crumbled when Nintendo decided to pursue the same tech with Philips — with whom Sony was working to develop what would become the DVD.

Ken Kutaragi, who had been working with Nintendo on the project, persuaded Sony to press on with what was originally called “Play Station” and create its own console. When it launched, three years after the Nintendo collaboration ended, it sold 100,000 consoles on day one, reaching some two million within the first six months.

Together with its later redesign, PS One, the original PlayStation system became the first ever console of any kind to exceed 100 million sales. It reached this landmark in June 2004, nine years and six months after its first launch — and it remains the fifth best-selling console of all time.

It was a difficult legacy to follow, but the successor console — PlayStation 2 — surpassed it. Moving on to DVD-based tech, the PS2 was as popular a home media player as it was a console. It smashed the original’s sales records, hitting the 100 million mark in under six years after its March 2000 launch. In fact the PS2’s records still stand, with 155 million consoles sold, as the best-selling console ever made. 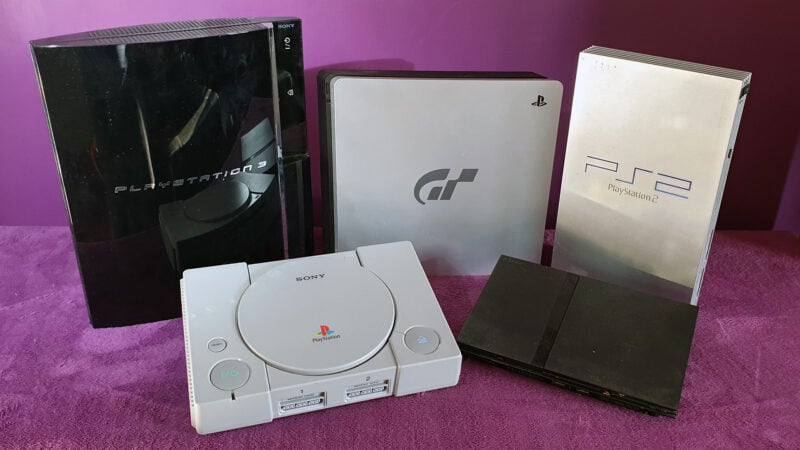 PS2 also pioneered Sony’s online gaming services. First launched in Japan in 2001, the online service required a network adapter for the original console. However the later version of the PS2, officially called the Slimline, incorporated an ethernet port for accessing “PS2 Online Play”.

After two smash successes, the PlayStation 3 was something of a problem child. Launched in 2006 in Japan and North America, the PS3 was the first console to use Blu-Ray discs — Sony’s solution to high-definition video storage — but was vastly more complicated and costly than its predecessors thanks to the Cell processor. The PS3 launched at a price point 25% higher than any of its siblings.

Although it saw some unusual use as a supercomputer, with arrays of PS3 consoles serving as a cheap way of boosting processing power (starring in an episode of Person of Interest in this function), it was a far less popular device. It’s still the only PlayStation home console not to beat 100 million in sales, topping out at 87m before finally discontinued in May 2017.

The current console, PlayStation 4, is a return to form. More powerful but less complex, the PS4 cruised through the 100m mark in record time, two months quicker than its grandfather. It now stands fourth on the all-time list and second for home consoles, behind only the PS2.

Over their 25 years on the market, PlayStation products have sold a combined 530 million devices — half a billion — winning a Guinness World Record for best-selling home console brand in history, and it shows no signs of stopping. The next console is already starting on its journey, with a launch date roughly 12 months from now.

We can only guess what consoles will look like in another 25 years, but with four of the top five best-selling home consoles of all time we wouldn’t bet against PlayStations six through ten…