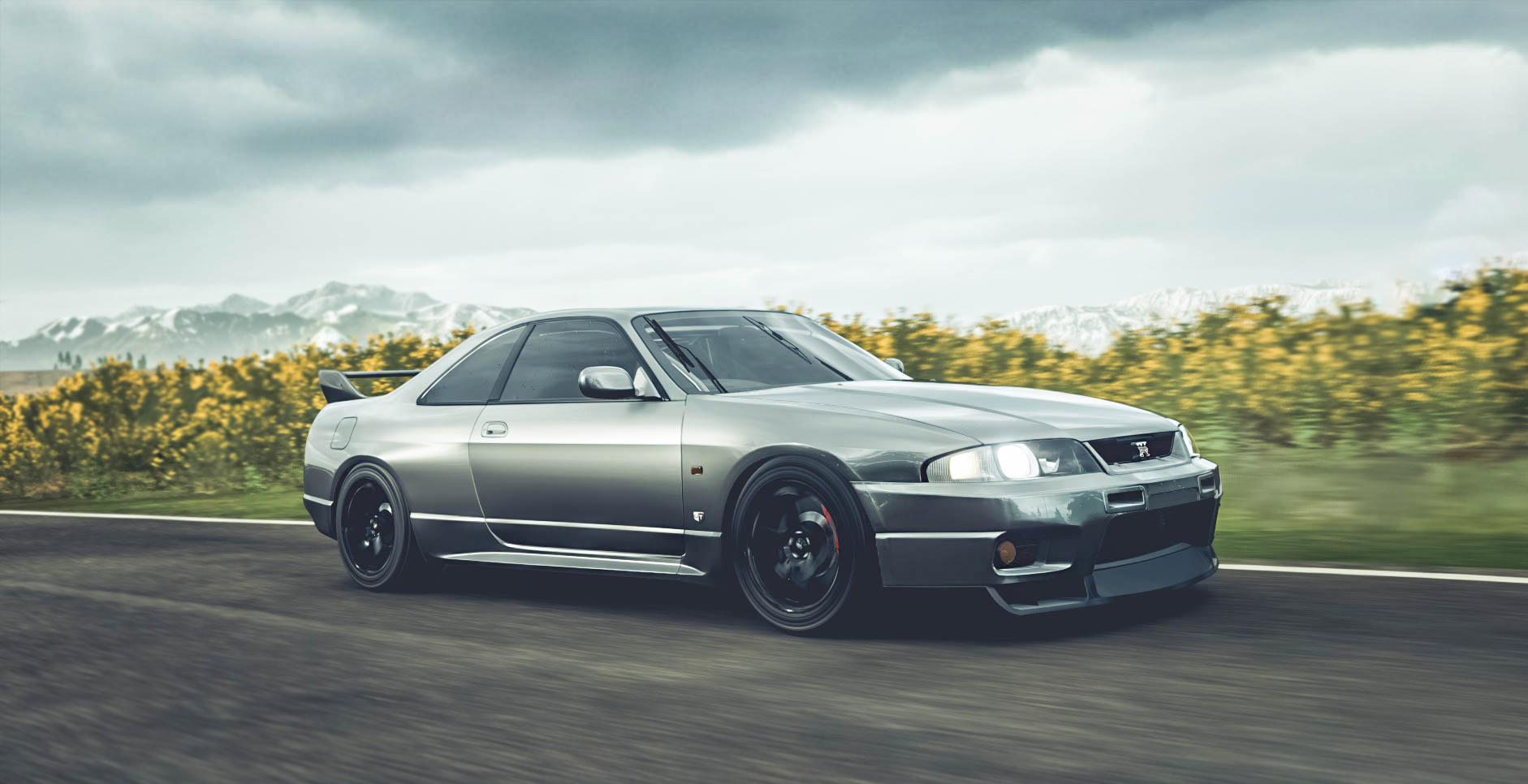 Right on cue, Forza Horizon 4 has ditched the winter blues for the refreshing hues of spring time.

It’s the first full week of the season in terms of the synchronized global settings, which means plenty of new content for players to explore. Struggling for grip will be less of an issue now, but those early-year showers mean some roads may be a little flooded…

We’ve got a full breakdown of the events, Forzathon shop, and new barn find. Read on for the details. 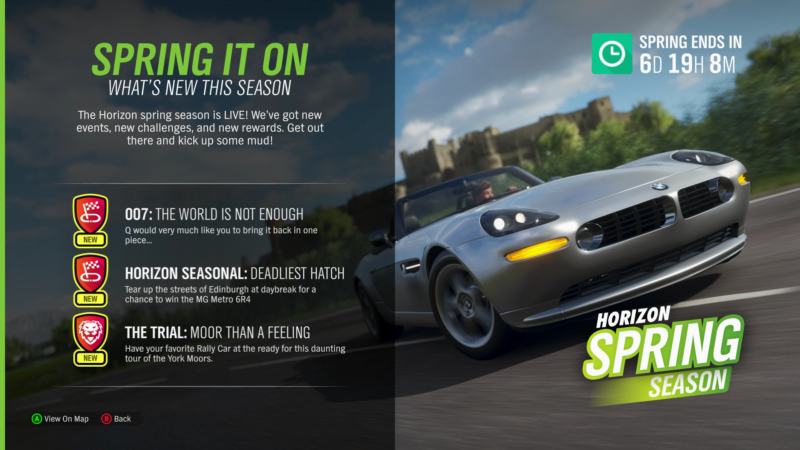 New this week is a shake-up of the prizes. The Deadliest Hatch event has a classic Group B MG Metro 6R4 up for grabs. You’ll need to bring your A-game though: the only way to score it is to finish first against the hardest Drivatars in the game. Or finish second against another player…

We’ve got the full details of each championship down below:

Moor Than a Feeling (Co-Op Championship)

The World Is Not Enough (Requires Best of Bond Pack)

Alongside the limited-time events, there’s a seasonal Speed Trap between Lakehurst Forest and Glen Rannoch. You’ll need one of the fastest cars in the game for this one: it’s a 235mph target.

Looking to score 100 Forzathon Points (or 200 as a VIP)? This week’s four-stage challenge should be able to provide it in fairly short order.

As was the case in previous weeks, the challenge zeroes in on a single car. For spring, that’s the Volkswagen Corrado VR6. This holds a special place in the Horizon franchise, as it was the very first car players could call their own back in the original game in 2012.

Luckily, the Corrado’s a cheap car at the Autoshow, and simply owning it satisfies the first requirement. Simple.

Up next is banking two million skill score with it. That sounds like a lot, but if you were one of the determined souls to do seven million for last week’s challenge, this should be pretty simple!

The third challenge is to win a single race. This is the Road Spring event at the Horizon Festival Spring route, so line up the Corrado there, against any level of competition, and take home the gold.

Depending on how swiftly you can pass the pack and avoid smacking into walls, the fourth and final challenge should be fairly simple. The goal here is to earn 10 Clean Racing Skills. These pop up after 10–15 seconds of keeping your nose clean in a race. Collect 10, and the Forzathon Point haul is yours. 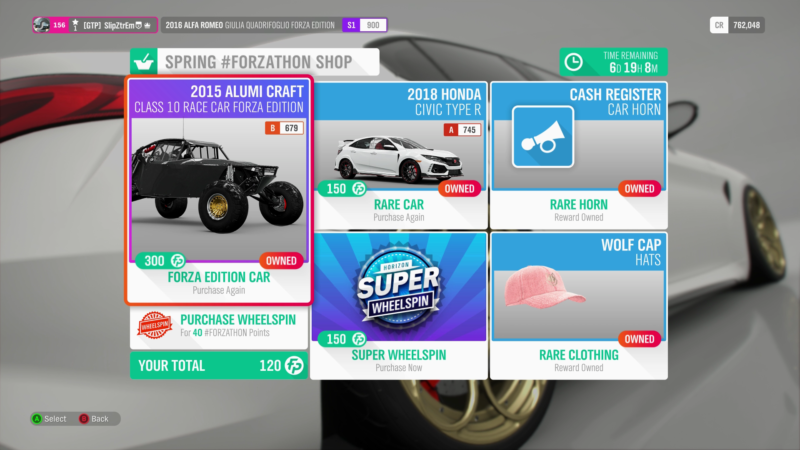 There’s another lineup of items here for players to purchase this week. A cash register horn and a pink wolf cap show up, though the bigger news are the two vehicles.

Up first is the 2018 Honda Civic Type R. It boasts practically the same power rating as last week’s Chevy pickup (306hp versus 308hp), but it couldn’t be a more different drive. The front-drive ‘Ring lap record holder showed up for free in FM7 earlier this year, so we’re happy to see it return. It’ll run you 150 Forzathon Points.

Another Forza Edition car is also in the mix this week. This time, it’s the Alumi Craft Class 10 buggy. This thing is an essential companion for any of the cross country routes, and it packs a unique Destruction Skills perk to maximize your points. It runs the usual 300 FP.

Finally, the season change brings with it one more unique Barn Find. We won’t spoil this one, but we will say it’s a very welcome addition to the Forza franchise. It should be at home on the longer straights on the map too…

Gary Slater · Oct 18, 2018· Comments
For many Americans, this week is a time of giving thanks, but for those at the UK Horizon Festival the time has come for a new Autumn season to begin in Forza Horizon 4.

Gary Slater · Oct 18, 2018· Comments
As temperatures soar around the UK, a new Summer season has officially gotten underway in Forza Horizon 4. We’re now in the opening stage of Series 55, meaning a fresh remix of events and prizes that are once more waiting to be claimed.

Gary Slater · Oct 18, 2018· Comments
Sunshine and rain showers around the UK are the ideal recipe for a new Spring season in Forza Horizon 4. The end of Series 54 is in sight and players around the festival are mounting one last assault to grab the remaining content up for grabs.

Andrew Evans · Oct 18, 2018· Comments
Forza Horizon 4 is now midway through its 54th Series, as Winter once again reaches the UK.

Gary Slater · Oct 18, 2018· Comments
Darker nights and spooky creatures roam the streets as another Autumn season makes itself known in Forza Horizon 4. Halloween is just around the corner and there’s plenty of treats on offer in the latest events.

Gary Slater · Oct 18, 2018· Comments
The heatwave gripping the UK festival means that a fresh new Summer season has officially begun in Forza Horizon 4. We’re marching into Series 54, with a freshly assembled set of events and targets for players to aim for over the next four weeks.

Gary Slater · Oct 18, 2018· Comments
Flowers are blooming and the sun is shining as a new Spring season gets underway in Forza Horizon 4. As the 10th Anniversary celebrations are kicking off in Mexico, those in the UK are nearing the end of Series 53 with a final push to grab the last batch of current content.

Gary Slater · Oct 18, 2018· Comments
Dark nights and a white landscape mean that a new Winter season has started in Forza Horizon 4. Plowing through deep drifts and treacherous ice will uncover the latest round of events and more content to fill your garage.

Gary Slater · Oct 18, 2018· Comments
As nights begin to draw in earlier, a brand new Autumn season has kicked off on Forza Horizon 4. Along with muddy trails and wet roads, players are continuing their search for the latest events and claim more content.