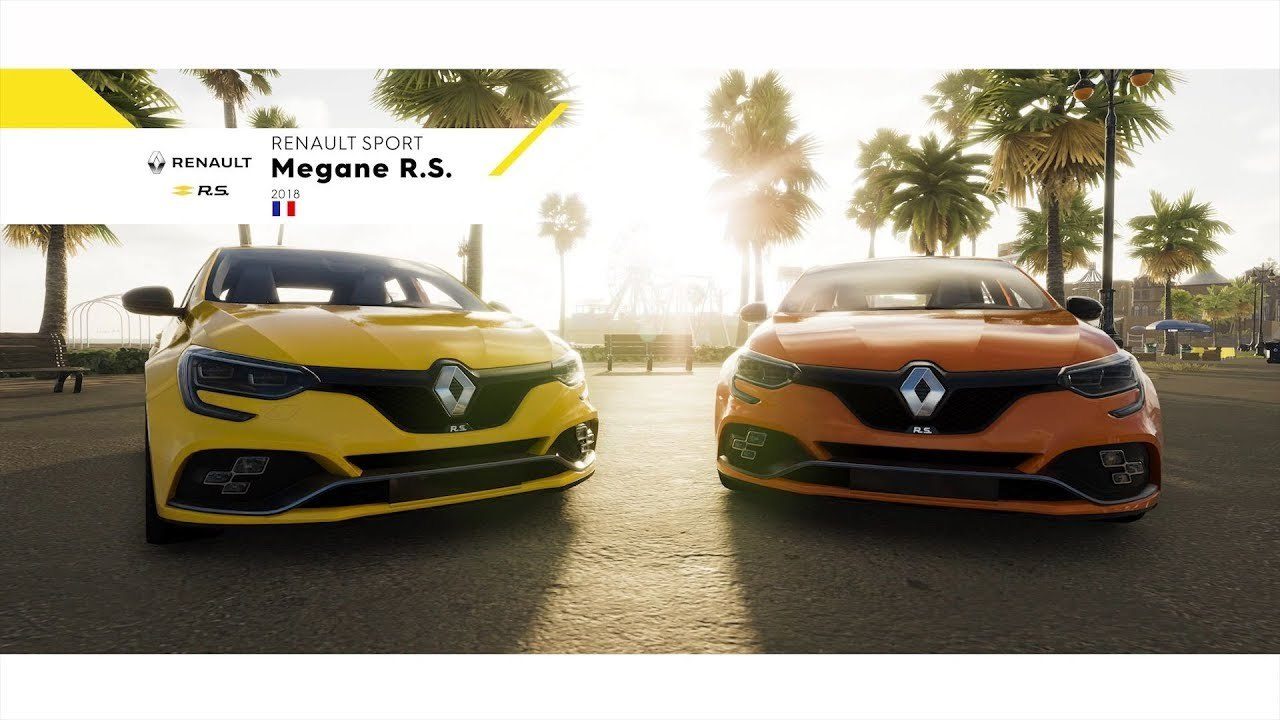 With release slowly but surely approaching, players will finally get a chance to play The Crew 2 soon enough. Following a disappointing delay earlier in the year, Ivory Tower is preparing the ambitious open world racer for the end of June. The vehicle roster in the title will span land, sea and air but there’s a special treat for hot hatch fans. Meet the Renault Megane RS 2018.

Suitably mental and a bit over-designed, the RS is certainly a looker. The striking bodywork is accompanied by funky headlights and bumper lights in the shape of the Renault Sport logo. Usually this sort of thing would be overkill but we personally love it. This is definitely the type of car we want to hoon around in The Crew 2.

One takeaway from the short one minute trailer is the striking visuals of the game. The lighting engine looks especially nice with vibrant colours that don’t cross the border into a cartoony look. Everything looks very real, which will make changing vehicle types in real-time look even more ridiculous. If real world reviews are anything to go on though, you might fall in love with the RS 2018. There’s a real beast under the devilish looks of the French hatchback.

This video appears to be the first in a new series highlighting the motorsport class cars in the game. The original The Crew title had a decent car list that was maybe a bit too DLC centric. Hopefully this time around Ubisoft and Ivory Tower pay more attention to the vanilla vehicle roster.

Release isn’t too far away, as The Crew 2 will launch on PS4, Xbox One and PC on June 29. Sign up for the upcoming beta right here.

Michael Leary · Apr 20, 2018· Comments
The latest update for The Crew 2 is now available on all platforms. Dubbed ‘Blazing Shots’, the free update brings a host of new events, vanity items, and of course, new cars to roam the open world in.

Kyle Patrick · Apr 20, 2018· Comments
If you’ve been itching to give Ubisoft’s The Crew 2 an extended test drive, this weekend is your chance. From now until Sunday, the open-world racer is free to play on all platforms.

Gary Slater · Apr 20, 2018· Comments
Players of Ubisoft’s The Crew 2 will be the first to get their hands on the latest British sports car. The 2019 TVR Griffith, built as part of the brand’s revival, will make its racing game debut in the massive open-world racer.

Michael Leary · Apr 20, 2018· Comments
At long last, The Crew 2 is now available on the PS4, Xbox One and PC platforms. There’s a lot more going on in Ubisoft’s ambitious sequel to its open-world racer. Unlike the original, The Crew 2 allows players to explore the land, sea, and air.

Michael Leary · Apr 20, 2018· Comments
Tomorrow, The Crew 2 will touch down on all platforms, giving racers a chance to race across the States. Before the big day, Ubisoft has taken the opportunity to go over how players will climb the ranks.

Kyle Patrick · Apr 20, 2018· Comments
Today, thousands of players across the globe are getting in on The Crew 2. Early access has begun, and the game marks a rather unique point in the history of the racing genre: it’s the first new racer to feature both Porsche and RUF from day one.

Kyle Patrick · Apr 20, 2018· Comments
The Crew 2 is the latest open-world racer from Ivory Tower. Expanding on the 2014 original, it is once again set in a miniaturized version of the continental US. This time though, the devs have added planes and boats to the mix, even allowing players to swap between them with the touch of a button.

Kyle Patrick · Apr 20, 2018· Comments
The second beta for The Crew 2 is done. As a sequel to an ambitious arcade racer, it’s poised to be one of the main racing games of the summer.