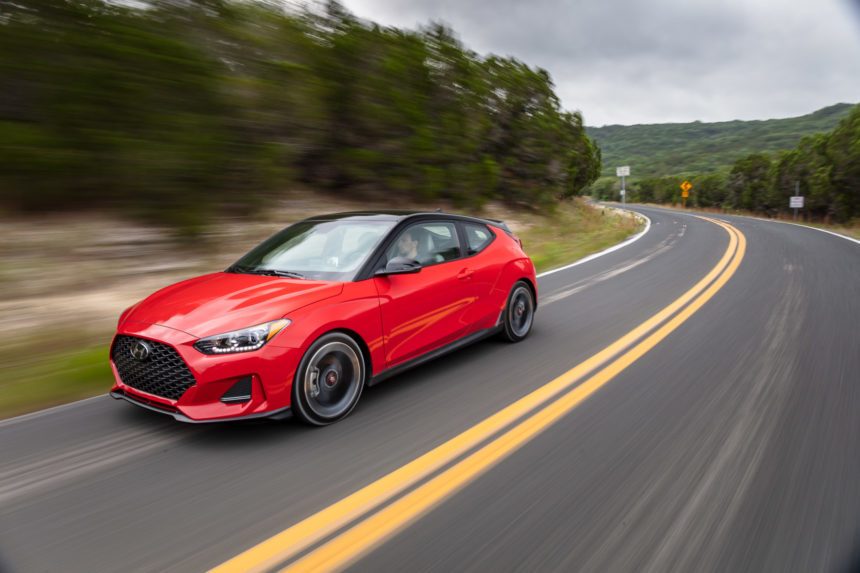 I learned to drive in a Hyundai.

It was a ’96 base model Accent, and I was 14 when I first got behind the wheel. It lacked a great many things — ponies, power steering, or even a proper shade of red — but as the first car I completely drove on my own, it forever cemented the marque’s place in my own driving history.

Fast forward almost 20 years to me landing in Austin to test drive the 2019 Hyundai Veloster Turbo. I’ll spare you the cliché “look at how far Hyundai’s come” yarn; it’s been years since we’ve lived in a world where a Korean car could only compete based on its discount price.

The first Veloster was a fun if flawed machine. How much better is the new model? I spent some time with the new four-door in manual (R-Spec) and dual-clutch (Turbo Ultimate) forms to find out.

Yes. While the new car more closely follows the family look (at least up front), it retains the asymmetrical door layout of the original. That means one door on the driver’s side, two on the other, and a hatch out back.

The unusual layout is a defining feature of the Veloster. With the Kona now flying the Hyundai flag in the red-hot small crossover market, the Veloster has been able to embrace its sporty side. A more rakish roofline disguises the same total height as before, while width is up 0.4 inches. In a time of increasingly un-compact compact cars, it’s encouraging to see Hyundai’s added less than an inch between the bumpers, too.

To my eyes, it looks more athletic than before, with smart uses of negative space in place of the last car’s bulbous haunches. The rear is dominated by the visual heft of the bumper, but the diffuser does cut some of that down. The central-exit dual exhaust pipes are nice nod to the original — and in a rare instance these days, they’re real. “Noice,” as Jake Peralta would say.

Another returning feature is the 1.6-liter “Gamma” turbo. It produces the same 201hp and 195lbft as before; the latter figure now swells to 202 via overboost during full-throttle acceleration. Base models get a new 2.0-liter Atkinson-cycle four-cylinder with 147hp. Both engines join up to a six-speed manual; the nat-asp engine has an optional auto with the same cog count, while the turbo gets a seven-speed dual-clutch. 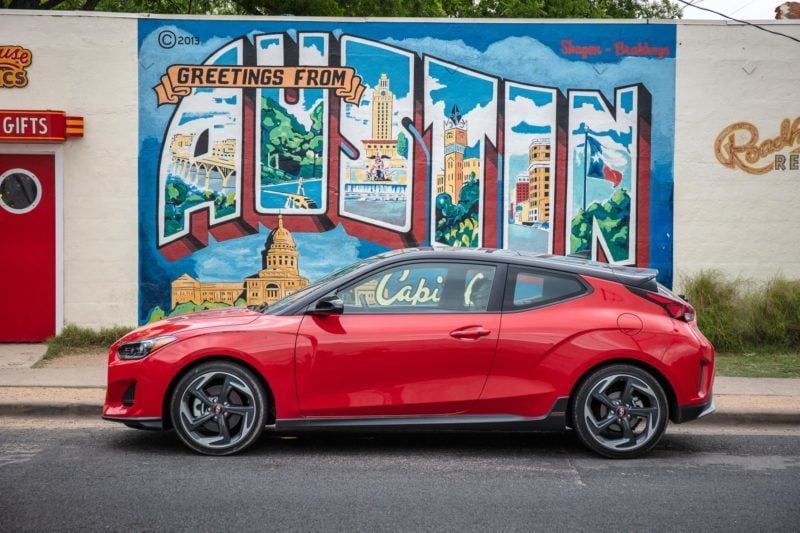 It does, but underneath the skin, the detail changes add up. Gone is the torsion beam rear end, replaced with a multi-link setup on all models. In its basic form it does duty under the Elantra Sport, but the engineers have further evolved it for the Veloster. A change to aluminum in key places like the front suspension knuckles and rear suspension carrier leads to the best kind of reduced weight: the unsprung kind.

The team even went properly nerdy by moving the steering rack an inch closer to the axle center line. This improves steering precision, making the car more predictable in more situations.

The interior’s received a welcome refresh too. That roofline may be more aggressive, but there’s actually more space inside (except rear leg room, which loses 0.2 inches). My co-driver was 6’2″, and able to sit behind himself without discomfort.

But it’s the dynamic changes that dominate the experience in the hills outside of Austin. You see, the R-Spec — a car with an as-tested price under $24k, remember — comes equipped with Michelin Pilot Sport 4s… 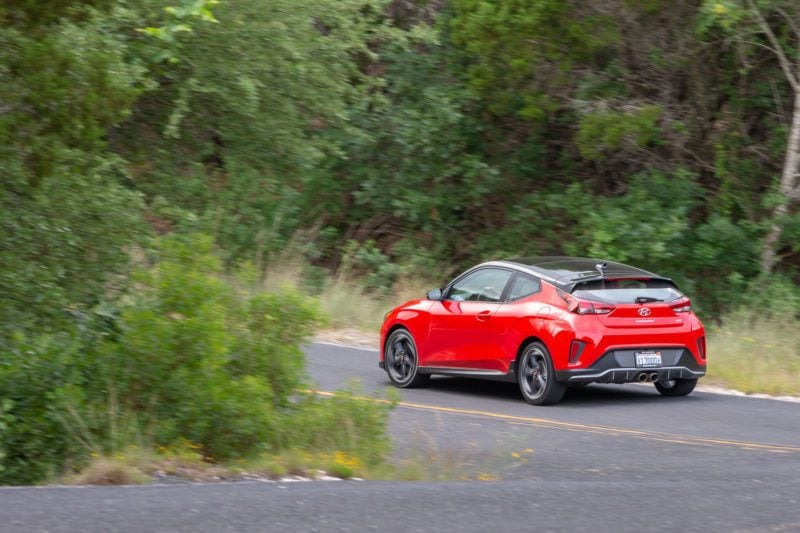 Is the Veloster a genuine hot hatch now?

That depends on your yardstick. With all-paw powerhouses touching 400hp, half that can seem a little tame. Hyundai hasn’t published acceleration times either, though we’d guess the Turbo hovers around the seven second mark for the dash to 60mph, like the old car. That’s the wrong sort of measurement for a hot hatch though; smiles per mile is what counts.

On that basis, Veloster 2.0 delivers. Those sticky PS4s dominate the experience in the R-Spec. My test route was littered with tight corners, both well-sighted and blind. The Veloster bit into each with the enthusiasm of a young schnauzer, feeling keen and alert. The new multi-link rear setup means the back tires follow the lead pair gamely, with zero fuss.

Feedback from the (electric power-assisted) wheel is light, but what it lacks in granular feel it makes up for with accuracy. Poke the drive mode button for Sport and it adds a bit more weight, as well as sharpens up throttle response.

The go pedal isn’t lacking in Normal mode, but the perk-up is a welcome one nonetheless. The Veloster rushes through the gears, though being a modern turbo engine, there’s little need to run it to the red, especially with that thick plateau of torque in the mid-range. The little 1.6-liter puts out a muscular — if not particularly tuneful — note, which can be artificially enhanced via a sound synthesizer. Hyundai has thankfully made that driver-selectable; it’s not heavy-handed, but is certainly noticeable with the music turned off.

Simply put, the manual transmission is fantastic. The B&M short-throw shifter falls easily to hand, and moves through the gate with a satisfyingly slick action. As a testament to its name, I passed right by third for fifth a few times in the R-Spec before I got used to the distance. But that’s my fault, not the Veloster’s. The clutch pedal requires a fair amount of pressure (I like it), with a consistent bite point making it easy to judge.

The dual-clutch unit in the Ultimate is a fine example of the breed. The paddles don’t offer the tactile delight of that six-speed, but they’ll follow orders in Sport mode. There’s a slight hesitation when downshifting, particularly the 3-2 shift, but it’s certainly quick moving up the box. Left to its own devices, the DCT never put a foot wrong.

The all-season tires lack the addictive grip of the R-Spec, but remain predictable. Braking, courtesy of 12-inch vented discs up front and 10.3-inch solid items out back, is strong and consistent in both cars.

During the presentation, Hyundai’s team made the bold claim that the Veloster might just see an uptick in the manual transmission take rate. On the evidence of my drive, I’d be inclined to agree. The DCT is no slouch, but the manual really is that good.

To answer the original question: yes, the Veloster Turbo is a bonafide hot hatch. 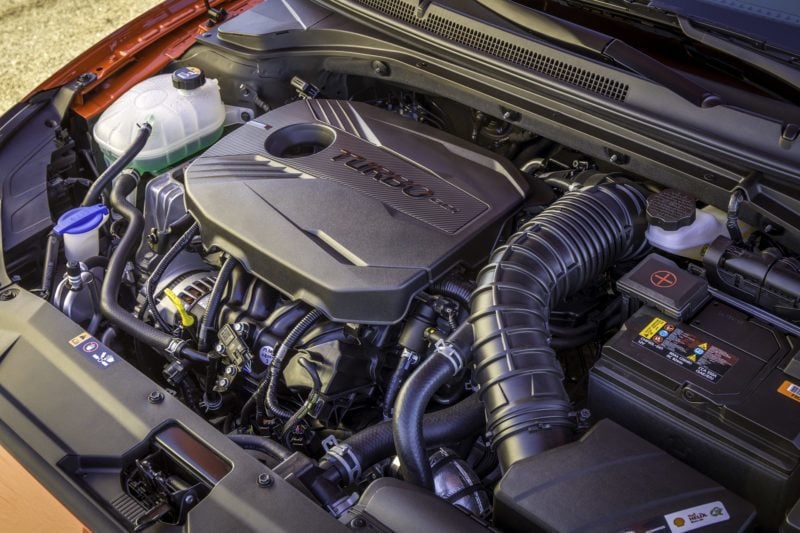 What other toys does the Veloster come with?

Plenty. And not just these Turbo models, either.

Every Veloster features Android Auto and Apple CarPlay, in addition to Bluetooth, AUX, and two USB chargers. The base model comes with a standard seven-inch touch screen, while every other model bumps that up by an inch. That same split applies to Hyundai’s Blue Link connected services system, with a three-year plan as part of the deal. The 2.0 Premium and Turbo Ultimate introduce wireless charging as well.

The Veloster comes with a litany of safety features. Forward Collision-avoidance Assist (FCA, or emergency braking) is on every Veloster, though the Ultimate adds pedestrian detection. Lane Keep Assist and an augmented rearview camera, plus the usual raft of stability/traction control are all standard across the board.

Interior quality itself is good: plastics are pleasant to the touch. The center console design is clean and clear, with no hunting for specific buttons. Cloth seats (or leather in the Ultimate) grip you in all the right places, without feeling restrictive.

Hyundai’s given the whole space a driver-focused slant, with a two-tone treatment visually dividing the driver and passenger spaces in the Ultimate. It’s subtle, with trim-specific dashes of color brightening things up. A heads-up display keeps your eyes closer to the action, too. 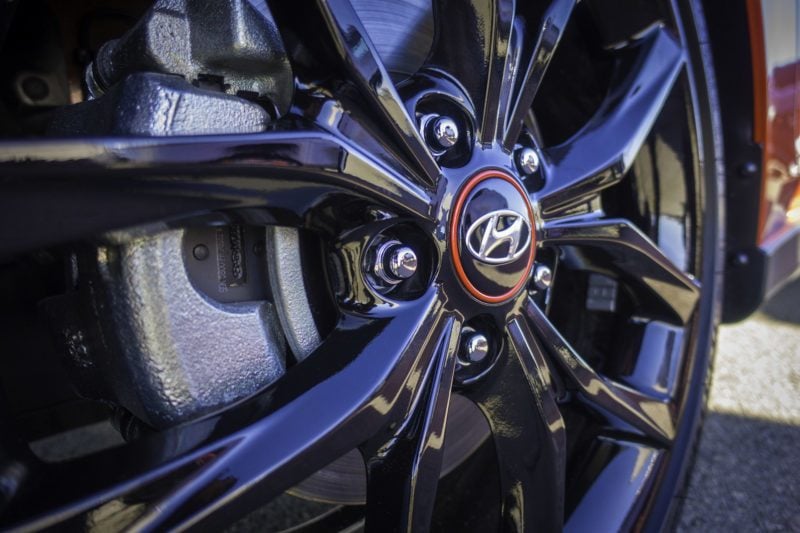 Hyundai refers to the original Veloster as a “reverse-halo” model. Instead of some six-digit Unobtanium at the top of the model tree, the Veloster acted as a much more relatable brand ambassador. It worked: almost three quarters of early Veloster buyers came from outside the Hyundai family.

It’s not a family car. The person buying a Veloster is younger, and even though the car is quite practical — it boasts more trunk space than the Toyota CH-R or Jeep Renegade — the style and fun-to-drive factors are most important. The Veloster Turbo excels at both.

What else will tempt them?

The most direct rivals would be the evergreen Civic Si and Golf GTI. Both offer serious performance credentials, with more power and more money needed for it. If style is more of a concern, the MINI Cooper S still offers its own spin on the segment.

With Ford killing off the Fiesta and Focus in North America, the ST versions of both are off the list.

Moving away from front-drive, Subaru’s potent WRX is a left field option. So is the BRZ and its Toyota cousin, if you’d prefer rear-drive.

The original Veloster Turbo felt like an economy car stretched to fit a role. With the Turbo being developed alongside the base car this time around, and the Kona taking care of the “lifestyle” side, Hyundai has been able to improve practically every aspect of the package.

At the end of the drive, the term I kept coming back to to describe the Veloster’s dynamics was “four-square”. It felt planted yet eager, and like the excellent base could easily handle more power. How much more? If I had to put a number to it, I’d say 74hp. Which is the exact amount the Veloster N will lord over the regular Turbo when it touches down later this year…

Crucially, as exciting as the N sounds, the Turbo stands on its own merits. It blends approachability, performance and practicality in that way only sporty hatches can, especially in R-Spec form. That the new Veloster is now as fun to drive as it is to look at makes it a serious competitor.

The Veloster nails its sophomore album, balancing new-found maturity while retaining its fun side. 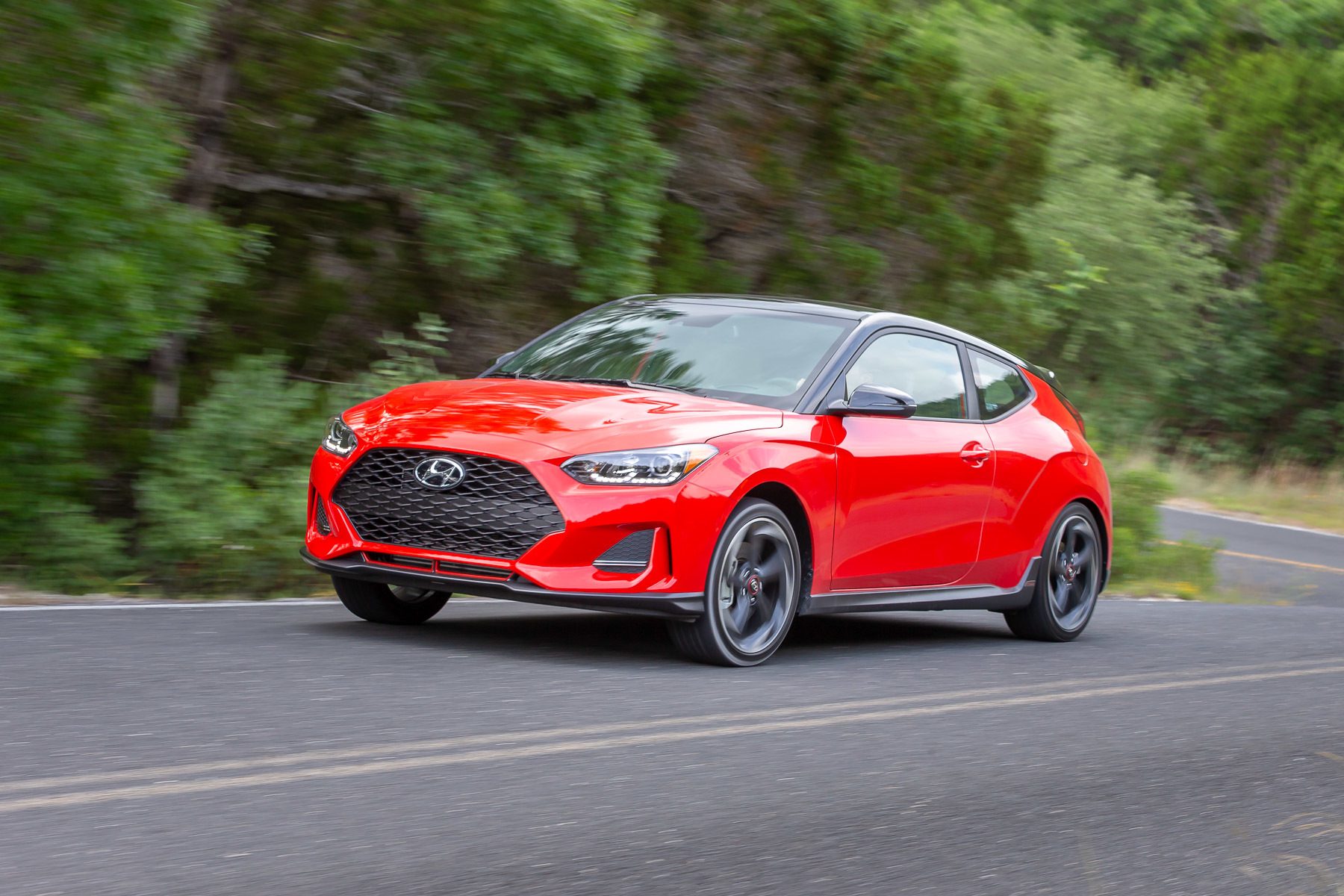 Performance
Commendably light weight makes the most of that 201hp. Strong in-gear acceleration shortens on-ramps.
Ride & Handling
Suspension is simultaneously firm and limber. Flows down the road nicely. Michelin tires on MT car are like activating an extra-grip cheat code.
Space & Comfort
Deceptively roomy inside. Front seats grip without feeling restrictive.
Equipment
Well equipped across the board, with a raft of entertainment and safety features.
Value
Few cars can boast such a blend of power, poise, and kit, especially for under 30k.