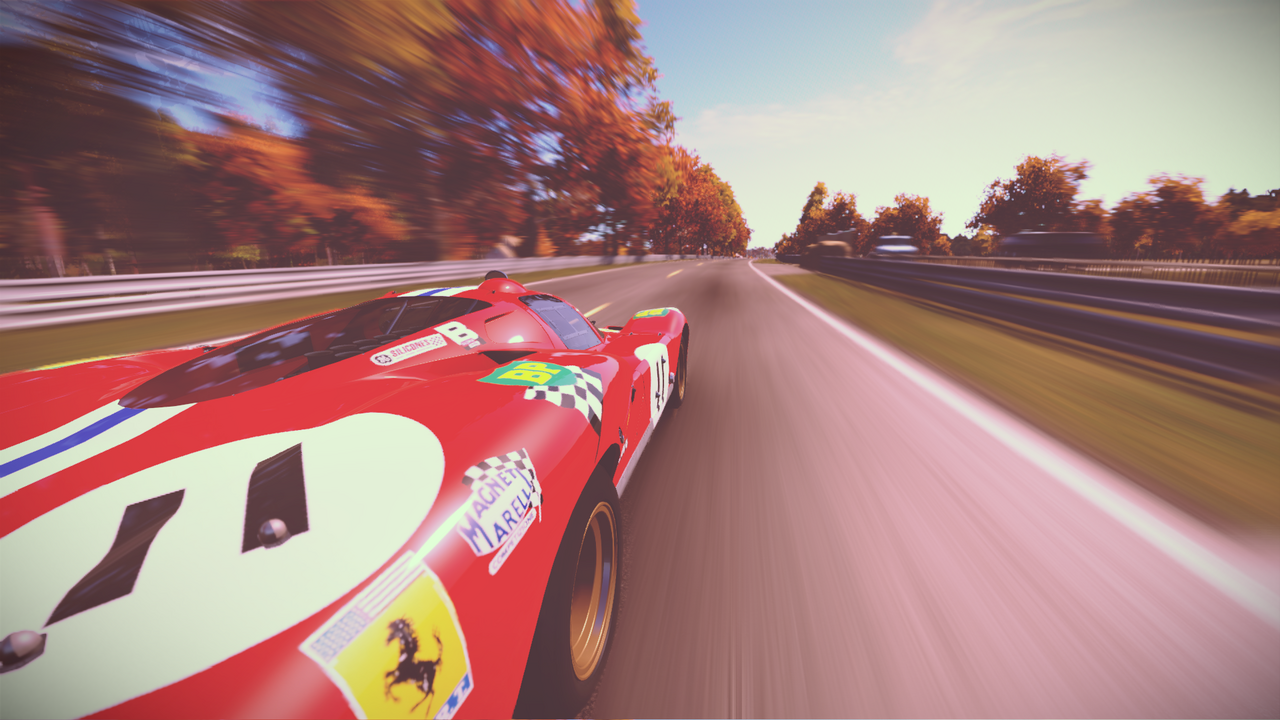 It’s not hard to imagine why Le Mans would serve as an attractive venue for the earliest racing games. Konami’s WEC Le Mans in 1986 was the first to depict the race with the blessing of the Automobile Club de l’Ouest, the body that manages the event.

The mid-to-late ‘80s are remembered as a golden era for the world’s longest-running endurance race, where Group C prototypes — especially those of Porsche — dominated the festivities. The famed German automaker was joined by the likes of Mazda, Toyota, Nissan, Jaguar and Mercedes into the early ‘90s, though it would be some time before players got to pilot licensed vehicles on the Mulsanne.

WEC Le Mans was revered as one of the finest racing games of its day. Oddly enough, it was frequently compared to Sega’s carefree Out Run — likely for no other reason than the fact than both were the best the genre had to offer. WEC also benefitted from a moving cabinet in some applications, which drew comparisons to Hang-On.

Developers would return to Le Mans more regularly throughout the ‘90s, as supercars like the McLaren F1, Porsche 911 GT1, and Mercedes CLK-GTR ascended to the front of the grid. In 1997, Sega released Le Mans 24, which drew on the company’s penchant for arcade racers with a miniaturized version of the Circuit de la Sarthe that could be lapped in less than a minute and a half.

You don’t hear much about Le Mans 24 because, frankly, it wasn’t very good. The game captured the spirit of the spectacle with animated pit crews, lively music and oodles of trackside fanfare to set the scene. But the darty handling and scaled-down circuit conspired to produce an experience that gave the impression of driving a top-fuel dragster on a Scalextric set. Nothing quite fit.

Also, it wasn’t particularly realistic. At this point in the ‘90s, lifelike physics were by no means mandatory for a top-selling racing game. Sega’s Scud Race, released in 1996, employed a few of the same cars in Le Mans 24 but featured tracks set in Native American ruins, seaside aquariums and airports — and it was considerably more successful.

That said, you could argue that the advancements of the day were being wasted on increasingly over-the-top arcade experiences. What Le Mans truly needed was a showcase that tackled endurance racing faithfully, in all its unforgiving, occasionally heartbreaking glory.

Fans had to wait until 2000 to get a true representation of Le Mans in games, but it was worth it. Test Drive Le Mans was known as Le Mans 24 Hours in most of the world, and it released on no less than five platforms, including the PC (twice). But it’s the Melbourne House-developed Dreamcast and PlayStation 2 versions this retrospective is especially concerned with.

To this day, I struggle to imagine a sporting event captured more perfectly in a game than the 24 Hours of Le Mans was here. Test Drive Le Mans cast the entirety of the 1999 grid, as well as a few Group C legends as unlockable bonuses. Besides Circuit de la Sarthe and Bugatti, the track roster extended to a few more venues common in endurance racing at the time, like Donington, Suzuka, Brno and Catalunya.

It wasn’t large in content, but it surely was large in character. Test Drive Le Mans pushed 24-car grids, with day-to-night cycles, dynamic weather, and tire wear. Much of the car roster was licensed, with the endorsement of the majority of teams that participated in that year’s running. And, for that extra touch of authenticity, determined players were even allowed to run the race in real time.

Underpinning it all was a rock solid physics engine, with steering that felt neutral, predictable and believable. Coupled with a thrilling sense of speed, impeccable sound design and loads of visual flair, from backfires to taillights reflecting on wet asphalt, Test Drive Le Mans was easily one of the most advanced racers of its day. It continues to age beautifully even now.

The Beauty of Grid

Over the ensuing console generations, it wasn’t uncommon to see Circuit de la Sarthe appear in more titles, including Gran Turismo 4 and Forza Motorsport 3. Granted, most of the games that had the venue still didn’t license the event itself. But in 2007, Codemasters’ Grid was a notable outlier.

Grid’s Le Mans is equal parts inspiring and infuriating. On one hand, it’s impossible to overstate Codies’ technical wizardry at the time. The studio’s masterful work was best displayed at the end of every season in the game’s campaign, where the player would be invited to compete at the prestigious 24-hour competition.

La Sarthe looked stunning in Grid, and graphically it felt like a monumental leap forward. The first time I witnessed the transition from daylight to dusk, I couldn’t believe my eyes. Watching my Audi’s headlights project onto the Dunlop bridge and illuminate the trees lining Indianapolis and Arnage were generation-defining moments.

Unfortunately, though, Grid’s rendition still cut too many corners. Because the game had no provisions for pit stops, tire choices or fuel, the pit lane was perpetually closed and strategy never played a factor. Neither did weather, and the grid was confined to just 16 entrants — fine for ordinary racing, but insufficient for Le Mans. Grid didn’t even set the scene with a rolling start.

Oh, and Codies’ interpretation of Circuit de la Sarthe was a bit off — as in really wide. Throw in Grid’s numb physics, and it was far too easy to roll through infamously tight segments of the track, like the Ford Chicanes, with no braking and shockingly minimal steering input.

Project Cars 2 and Beyond

That brings us to the present, and to Project Cars 2. The 24 Hours of Le Mans is prominently featured in Slightly Mad Studios’ latest sim as well as its predecessor. In terms of realism as well as breadth of content, it’s easily the most complete Le Mans experience available to fans thus far, and it recently got even sweeter thanks to the just-released Spirit of Le Mans DLC pack.

That expansions adds a number of new and old Le Mans legends, from two different configurations of the last Audi R18 to the 1971 Porsche 917 LH and 1970 Ferrari 512 M and 512 S. But the most notable inclusion is arguably the vintage Circuit de la Sarthe, which approximates how the track looked around the time those two latter prototypes duked it out for the overall win.

Driving a nearly 50-year-old version of Le Mans is a surreal experience. Here’s a modern sim emulating an era that well predates gaming, and isn’t properly preserved in any media (outside of Steve McQueen’s epic Le Mans, of course). Reliving it, even in a virtual sense, feels like traveling through a portal to another world.

As technology improves, we’ll no doubt see even more faithful recreations of this incredible event. The future of Le Mans will continue to be documented by developers with even greater accuracy, and forever immortalized in simulators. That’s a wonderful thing. But I hope we don’t lose sight of the history behind the spectacle — the distant past that cultivated Le Mans’ legacy, and inspired the very first racing games.

Credit to Chikane for the lead image!

Jordan Greer · Jun 14, 2018· Comments
The Gran Turismo series has had a lot of milestones over its 25-year history, but the anticipation surrounding Gran Turismo 7’s free launch-day support for PSVR 2 is reaching hype levels not seen in quite some time, if ever. Kazunori Yamauchi feels it, too.

Andrew Evans · Jun 14, 2018· Comments
After a break in real-world racing following the controversial events at the end of the 2020 FIA Formula 3 championship, Igor Fraga will be returning to action this season in Japan’s major national racing series.

Andrew Evans · Jun 14, 2018· Comments
A new week means a new set of Gran Turismo 7 Daily Races, with three races running on their usual 20-30 minute schedules for the next seven days.

Jordan Greer · Jun 14, 2018· Comments
After I had the opportunity to be one of the first people to play Gran Turismo 7 with PSVR 2 last week, I also had the chance to speak with Gran Turismo creator Kazunori Yamauchi for a one-on-one interview to discuss the new hardware.

Andrew Evans · Jun 14, 2018· Comments
As Red Bull was unveiling its Formula One contender for the 2023 championship season, the RB19, the team also revealed a highly unusual competition that will see the car run in three different fan-designed liveries this season.