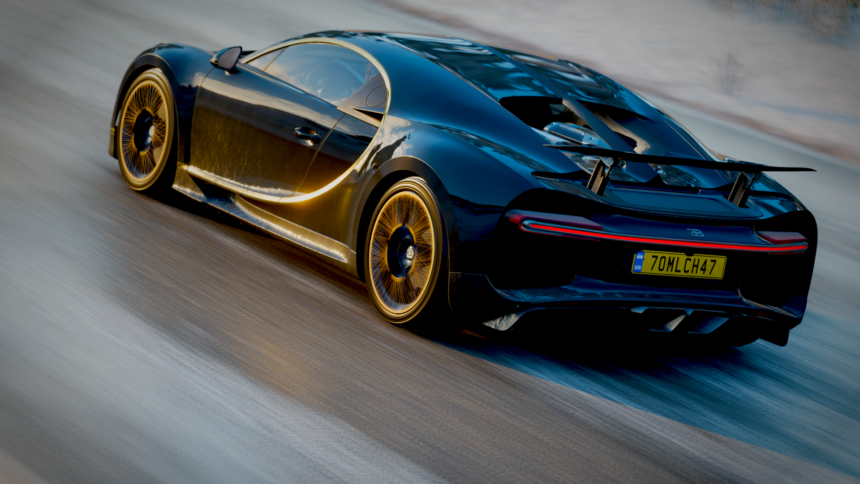 It’s a new year in Forza Horizon 4, and that means a new season change for players. Winter this week brings a plethora of new content and race challenges.

This week has players taking part in a variety of challenges, from a Little & Large rivalry, to offroading in hot rods. The diversity of cars in these challenges will keep players engaged for quite some time this week.

We’ve got full details of this week’s content below:

A new season also brings new cars for players to enjoy. This week sees a pair of four-seater Italian grand tourers arrive in Britain, with one more suited to this week’s snowy conditions than the other. 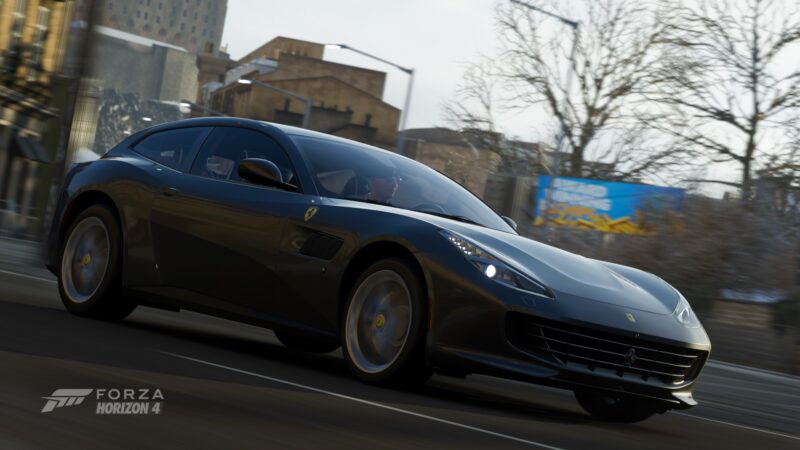 Taking the formula started by its predecessor, the FF, the GTC4Lusso features an updated four-wheel-drive system and also adapts rear-wheel-steering from the 812 Superfast.

With a 680 horsepower 6.3-liter V12 under the hood, this peculiar shooting brake is one of the fastest ways to get yourself and three friends across continents in all conditions. With a 0-62mph time of just 3.4 seconds and a 211mph top speed, the GTC may look like an oddball, but it has serious firepower. 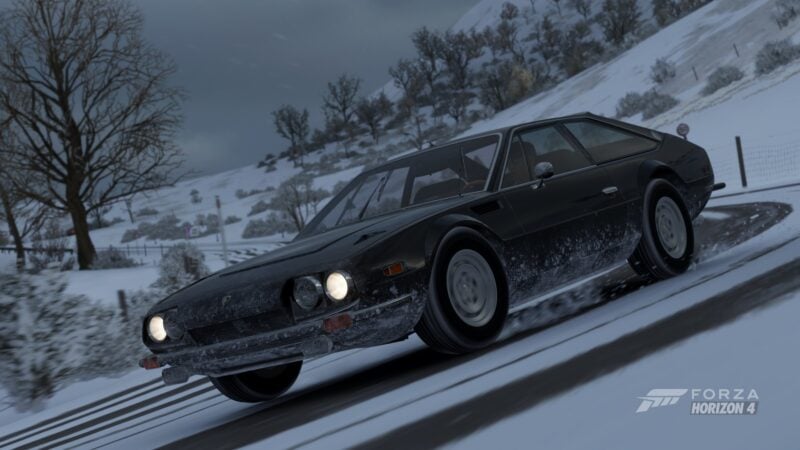 Next is the 1972 Lamborghini Jarama S. This wedgy grand tourer was intended as a replacement for the Islero.

The S version is an exclusive car, as just 152 units were built during its production run. Befitting of a Lambo, the Jarama is powered by a 3.9-liter V12 making 365 horsepower.

Compared to the Countach and Jalpa of the time, the Jarama may look tame, but it’s still a proper raging bull at heart. 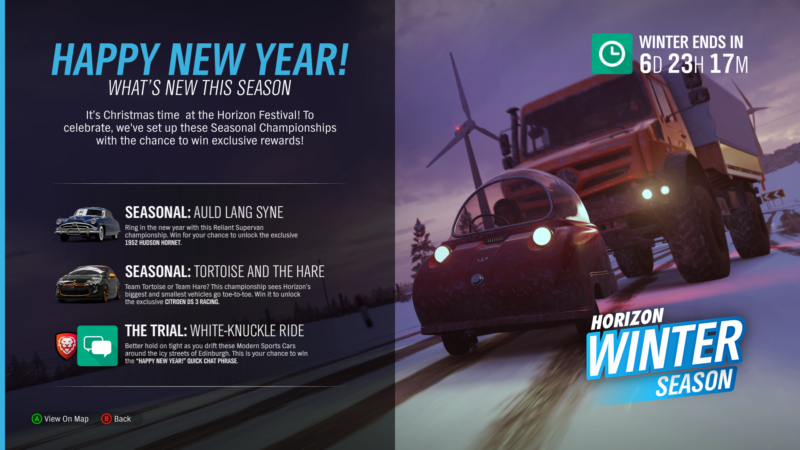 Racing events this week feature a wide variety of challenges, with new cars as prizes. Players racing Horizon’s biggest and smallest cars have a chance to win a 2011 Citroen DS3 Racing in “Tortoise and the Hare”.

Those after a “Fabulous” slice of American history can win a 1952 Hudson Hornet by tackling “Auld Lang Syne” in the Reliant Supervan. Just be careful not to tip it over on every corner.

Details on this week’s race events are below:

Tortoise and the Hare 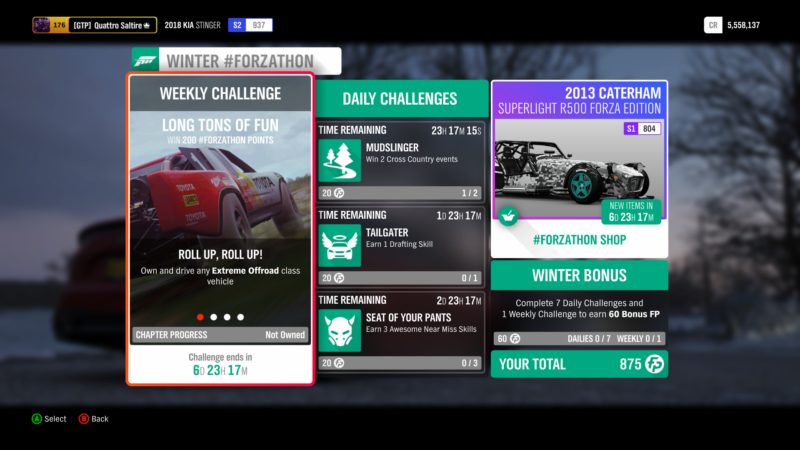 Forzathon challenges this week center around the Extreme Offroad class. Whether you have a Baja trophy truck or a Dakar Rally Raid machine, the first objective is to simply own and drive any Extreme Offroad vehicle.

Next up, showcase your offroad driving skills by winning 3 Cross Country events in your chosen Extreme Offroad machine. Play around in the snow and earn 20 Wreckage Skills for the third objective.

Last but not least, spread your wings and earn 9 stars total from Danger Signs. With the off-road capabilities of these monsters, flying through the air should be no problem. 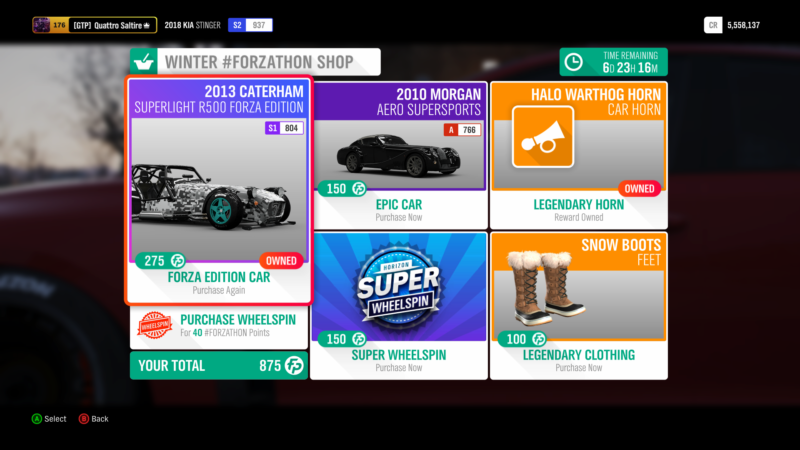 This week’s Forzathon shop lineup is all British. The featured car is the Morgan Aero Supersports. Essentially a targa-top predecessor to the end-of-the-line Aero GT, the Aero SS costs a reasonable 150 Forzathon points.

The Forza Edition car is the extreme Caterham R500 Superlight. This car comes with a Drift skills boost, but it’ll be quite a handful to get it to behave when sideways. At 275 FP, it’s cheaper than some Forza Editions that have came before. However, if you already own one, we suggest spending points on regular and Super Wheelspins instead.

Finally, you can warm your avatar’s feet with a pair of snow boots, or channel your inner Master Chief with the Halo Warthog horn. Both will set you back 100 FP each.

It might be a new year, but not a new Barn Find rumor for this week. The Winter exclusive barn find is once again available. No spoilers, but this one can go anywhere in comfort and luxury.