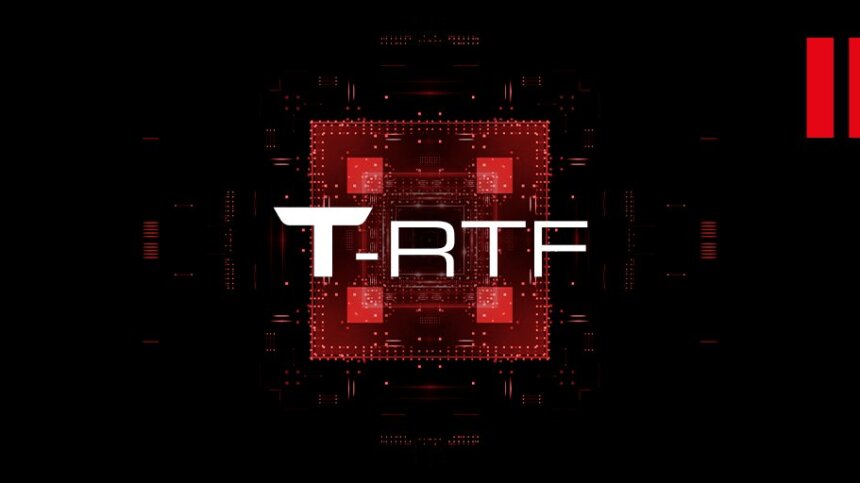 Right on schedule, and just as we predicted after last week’s teaser, Thrustmaster has taken to social media to preview something new. However it’s not quite what we were expecting.

Over the past two Thursdays, Thrustmaster — the official wheel partner of Gran Turismo Sport, with its T-GT wheel set — has dropped an image onto social media. The first was simply the universal symbol for “pause”, in red on a dark background. Last week it was a logo for something called “T-DCC”, and while we were expecting that thread to develop further this week Thrustmaster has instead shown a new “T-RTF” logo.

As noted previously, Thrustmaster does make peripherals across the gaming spectrum, including flight gear, headsets and controllers. To date though it has only ever used the “T-” prefix on driving equipment such as the T-GT wheel and T-LCM pedals.

That suggests that both the T-DCC and T-RTF are part of the driving peripheral range, but the teaser images are not exactly packed with clues as to what they could be.

The T-DCC image is surrounded with circles, suggesting a wheel, and the letters could be a D for Direct Drive, or Roman numerals for 700 — a natural follow-on from the T300 and T500 wheels. However previous naming standards, with the Thrustmaster Gran Turismo and Thrustmaster Load Cell Magnetic, tend more towards an abbreviation.

This week’s image is harder to decipher. “RT” often means “real-time” in gaming circles, and “F” can be shorthand for feedback or force feedback. That would all hint again at direct drive, which features force feedback directly applied to the steering shaft in real time rather than from a separate motor connected by a belt as you’ll find in other Thrustmaster wheel products.

At this point the only thing we’re sure of is that we’re going to have to wait some more to find out exactly what Thrustmaster is up to. We’ll be expecting more next Thursday!

Thrustmaster
51 Comments Discuss this post in our forums...
Test Your Badge Knowledge With Our Car Logo Quiz

Forza Series 34 Jun 13 by Andrew Evans
Microsoft has officially announced Forza Horizon 5, and at the same time confirmed both its setting and launch date. As expected, the Horizon Festival will move across the Atlantic to…