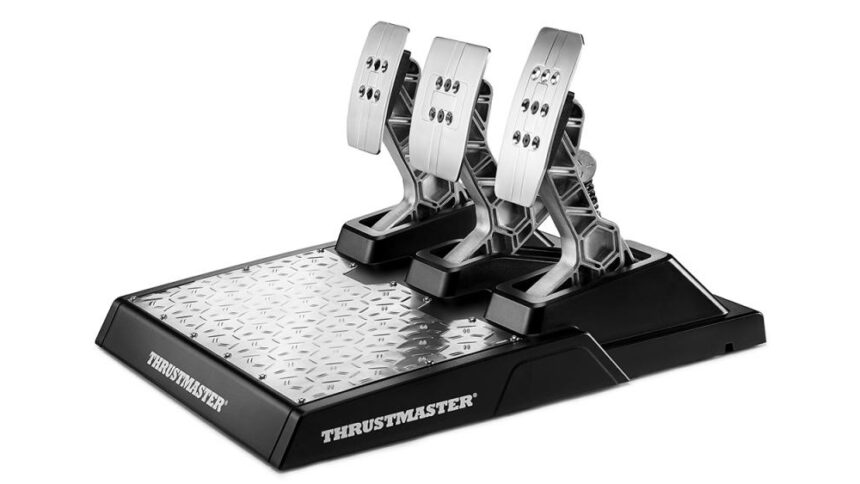 After a little leak earlier in the year, Thrustmaster has officially revealed its new load cell pedals in full.

They’re known as T-LCM, taking the name from the initials of Thrustmaster, load cell, and magnetic. This is due to the two different technologies at work inside the pedals. The throttle and clutch pedals use Hall Effect magnetic sensors, employing Thrustmaster’s contactless ‘HEART’ sensor system. With 16-bit resolution, each pedal is capable of registering 65,536 values.

However the key feature is the new load cell brake. Load cell technology operates on pressure sensitivity rather than the amount of pedal travel, converting how much force you apply to the pedal into an electronic response. When used on brake pedals it replicates the real-life action of braking, simulating the movement of the brake cylinder translating through to the calipers via brake fluid.

The T-LCM brake pedal is able to withstand force equivalent to 220lb (100kg), and it comes with a set of six springs to allow users to set up the braking force to their own requirements. Calibration software also allows for adjustment of braking force, and dead zones for each of the pedals.

Users can also adjust each of the three pedals independently, for height, angle, and spacing. If you prefer the pedal faces from your T3PA or T3PA-Pro pedals, they are interchangeable with the T-LCM pedal arms.

In addition to the pedal set, Thrustmaster is also making some accessories available separately. There’s a cockpit adapter, which will allow users to mount the T-LCM up to rigs that already use T3PA pedals without any extra holes necessary. A pedal stand offers users who don’t already have, or want, a cockpit a way to secure the pedals. You can also pick up some rubber covers for the T-LCM pedals.

Thrustmaster
559 Comments Discuss this post in our forums...
Test Your Badge Knowledge With Our Car Logo Quiz

WRC Series 17 Jun 16 by Andrew Evans
If you’re a PC player and you use Steam, you’ll be able to play a short demo of WRC 10 for free over the next week, starting later today. Thanks…

Forza Series 153 Jun 13 by Andrew Evans
Microsoft has officially announced Forza Horizon 5, and at the same time confirmed both its setting and launch date. As expected, the Horizon Festival will move across the Atlantic to…