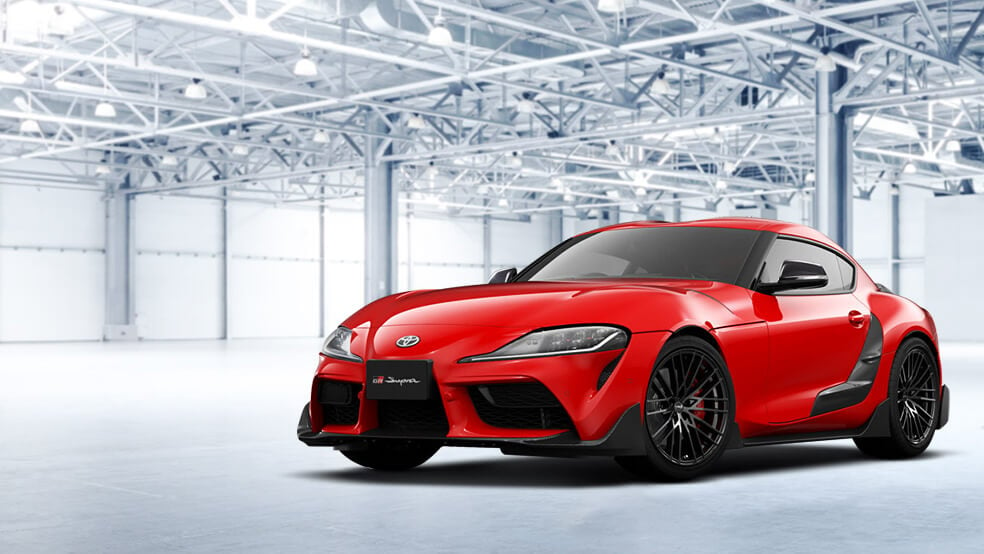 The kit consists of six parts, each of which you can buy individually if required. There’s five additional pieces of bodywork, each made from carbon fiber-reinforced plastic (CFRP), along with a smart new set of 19-inch forged aluminum wheels.

Developed in a wind tunnel, the kit is more than just a styling exercise. TRD says it genuinely affects the air flow around the car for the better, along with improving overall downforce levels.

This starts right at the front, with a new front splitter. This three-piece item effectively lowers the front of the car by around half an inch, with the fins at each side contributing to a reduction in front-end lift at speed.

Naturally TRD pairs this with a new rear spoiler. That lifts the rear ducktail, but also extends out to the flat areas above the car’s tail lights. TRD doesn’t give any specific numbers for how this affects downforce, but does note that it helps balance out the aerodynamic characteristics.

We’re slightly less convinced by some of the other items. The carbon fiber side skirts certainly make the car look a little lower — about a sixth of an inch lower — and TRD says they enhance “the rectification effect”. This essentially means they smooth out the airflow down there, from the turbulence washing back off the front wheels. The rear side spoiler does the same job, but behind the rear wheels.

However it’s the door garnishes that seem to stick out like a proverbial sore thumb. On the standard GR Supra, there’s covers over the rear side vents — they’re uncovered in motorsport applications. These TRD items replace the standard pieces, but seem to occupy about 20% of the door in the process. They apparently smooth the airflow to the rear end, but we’ll give it a miss, especially as it’s the most expensive trim piece the set.

The wheels are pretty smart though. They’re 19-inch forged aluminum pieces, measuring nine inches wide at the front and ten at the rear. TRD says they improve steering response and straight-line stability too. One thing to note though is that if you have the four-cylinder model — the SZ in Japan — these wheels are unavailable.

For now, the TRD tuning parts are only available in Japan. If you fancy trying to import it, the whole kit will set you back two million Yen, or around $18,500.

As for any change in the car’s power… well, we’re going to have to wait for the rumored GRMN model for that.