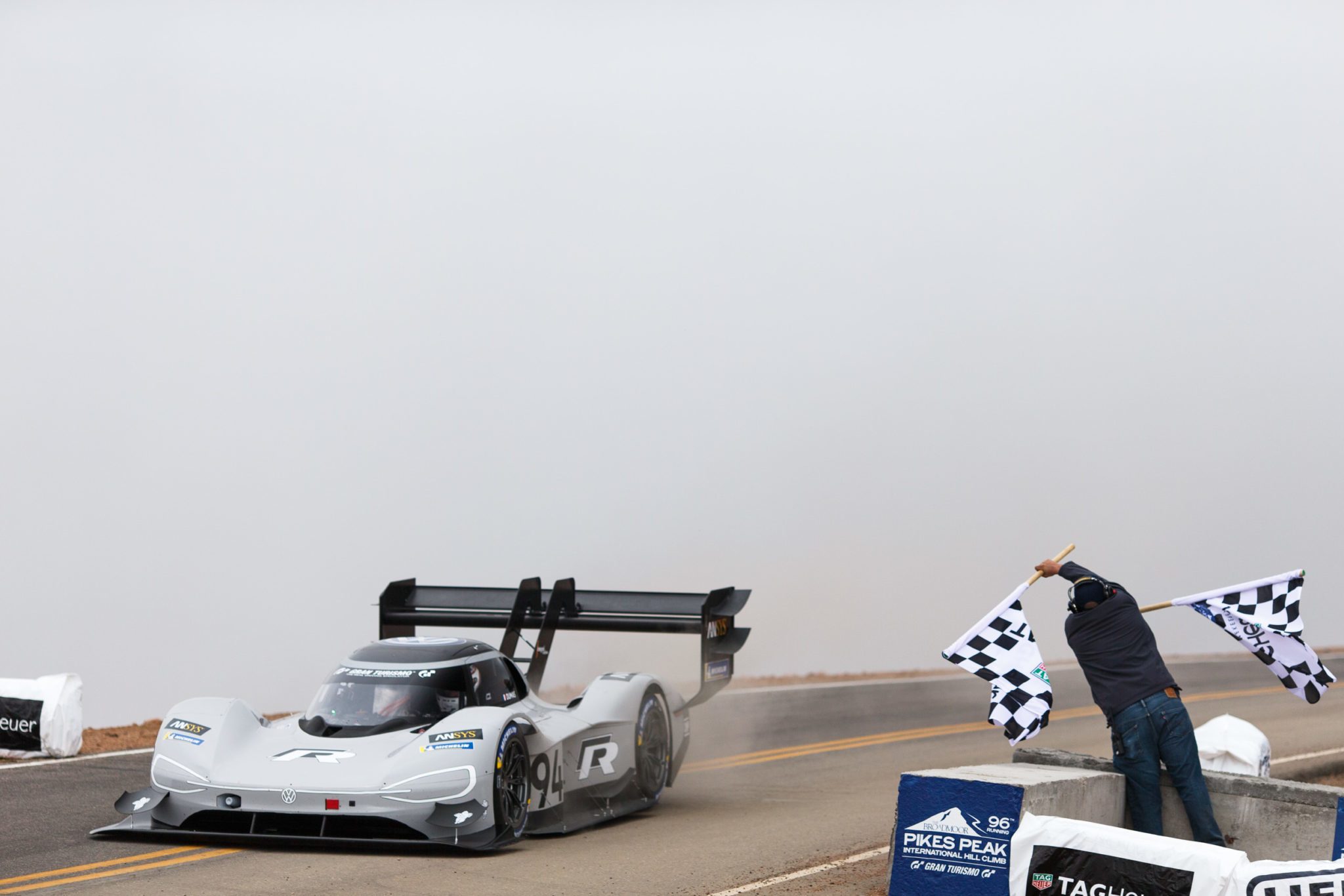 Volkswagen and Romain Dumas made history at Pikes Peak this weekend. Not only did they beat the previous electric-only record by almost exactly a minute, but the VW I.D. R‘s 7:57.148 time is now the fastest ever at the event.

It’s a remarkable time, regardless of propulsion choice. When the I.D. R posted an insanely fast qualifying time earlier in the week, bench racers around the globe speculated it could be the first sub-eight car. It’s hard to believe: only five years ago, Sebastien Loeb’s 8:13.878, set in an 875hp Peugeot 208 made specifically for the event, seemed like the ultimate gauntlet.

Despite being down on power — and up on weight — the stars aligned for the I.D. R and Dumas. Dumas stormed the all-pavement, 12.42-mile run, meaning he averaged over 93mph. We’re not sure what weighs more; the batteries, or the cajones needed for such a run.

Thanks to the all-electric layout, the 670hp I.D. R didn’t suffer the usual power loss combustion engines deal with. As the finish line sits at 14,115ft above sea level, and nearly a mile up from the start, that’s important.

An elated Dumas had this to say in a post-race press release:

“Awesome! We exceeded even our own high expectations with that result. Since this week’s tests, we have known that it was possible to break the all-time record. For it to come off, everything had to come together perfectly – from the technology to the driver. And the weather had to play ball too. That everything ran so smoothly is an incredible feeling, and the new record on Pikes Peak is the icing on the cake. I still cannot believe that Volkswagen and my name are behind this incredible time. The I.D. R Pikes Peak is the most impressive car I have ever driven in competition. The electric drivetrain means that many things are different and I learned a lot during the project. The team did an indescribably meticulous, yet at the same time relaxed, job. Not only did we get the desired result, but the team spirit was also spot on. I am incredibly proud to have been a part of it.”

With this record punctuating the 96th running of the PPIHC, Dumas becomes only the third driver to boast four (or more) overall wins since 1981. Will he return with Volkswagen to tie Rod Millen’s record of five next year? We can’t wait to find out!

Andrew Evans · Jun 24, 2018· Comments
The most famous 24-hour race in the world is back, for its 90th running, just 10 months on from its last event as it returns to its normal spot on the calendar.

Andrew Evans · Jun 24, 2018· Comments
Netflix has confirmed that Drive to Survive, its fly-on-the-wall docu-drama series following the world of Formula One behind the scenes, will return to the streaming service on March 11.

Andrew Evans · Jun 24, 2018· Comments
Venture capital concern ROKiT has teamed up with Sector3 Studios, developer of the RaceRoom Racing Experience sim, to create a new esports competition for teenagers with a very special prize: a season-long contract to race in Formula 4.

Andrew Evans · Jun 24, 2018· Comments
Newly crowned Formula One World Champion Max Verstappen has spoken of his love for sim racing during an interview with ex-F1 driver David Coulthard for CarNext.com.