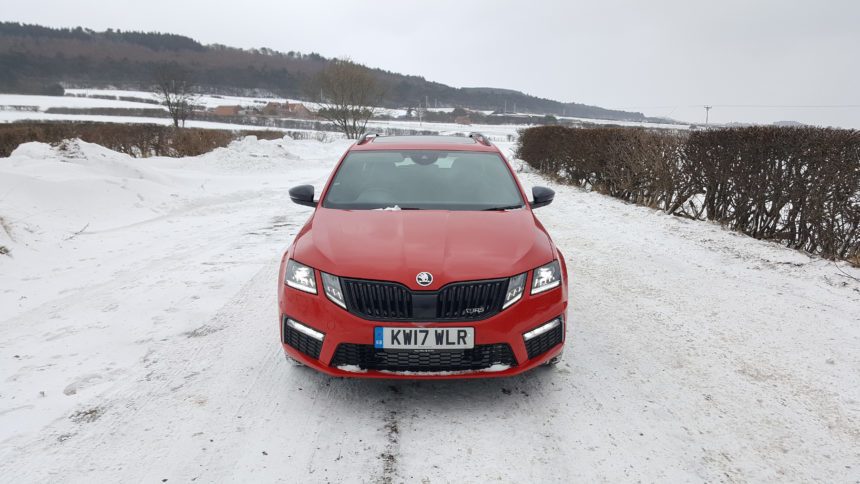 When it comes to reinvention, no brand has managed a turnaround quite like Skoda.

Mentioned in the same breath as Lada just 30 years ago, it’s now thought of as a marque that brings almost premium car quality at more mainstream budgets. It’s even started making SUVs, in the shape of the Kodiaq and Karoq.

But the car most identifiable with the rebirth is the Skoda Octavia. Introduced in 1996, it was the first of the new breed of Skodas, with Volkswagen money and know-how following the 1991 takeover. Skoda took the Octavia rallying, in the World Rally Championship, and soon after created a sports model by the name of vRS.

In case you’re unfamiliar with the brand, this is Skoda’s performance badging. Even if you are familiar with it though, chances are you don’t know the meaning.

The story goes that Skoda wanted to call its performance cars “RS” — after all, it honed the cars on the rally circuit. But Ford reportedly had other thoughts, at least in the UK, where it traded on its own rally heritage with the RS badge. To get round this, Skoda put the little v ahead of the RS. Clever.

But what does the “v” mean? Some think it’s for the first names of Vaclav Laurin and Vaclav Klement, Skoda’s founders. Others say it all adds up to “very rapid Skoda”. In fact it isn’t a “v” at all. It’s the same little mark as the one above the “S” of Skoda’s official name – called a caron (or “haček” in Czech).

The more you know.

Honestly, not a huge amount. Skoda facelifted the Octavia range last year and for the most part it’s a very, very subtle facelift. You can see just how subtle by comparison with a regular, pre-facelift Octavia in the image below.

Most of the changes are technological in nature – gentle tickles to the infotainment, for example. There’s a few of Skoda’s trademark little thoughtful touches carried over from the Superb too. The cupholders are extra grippy to make it easier to open bottles on the move and the estate, like our car, gets a removable LED trunk light.

The most obvious change is to the front end and… yeah, we’re not huge fans. The split-headlight look is a little on the awkward side, although it does bring adaptive LEDs to the mix.

Then there’s those three little numbers. 245 means that this vRS gets a useful 15hp hike over the already brisk 227hp standard model. 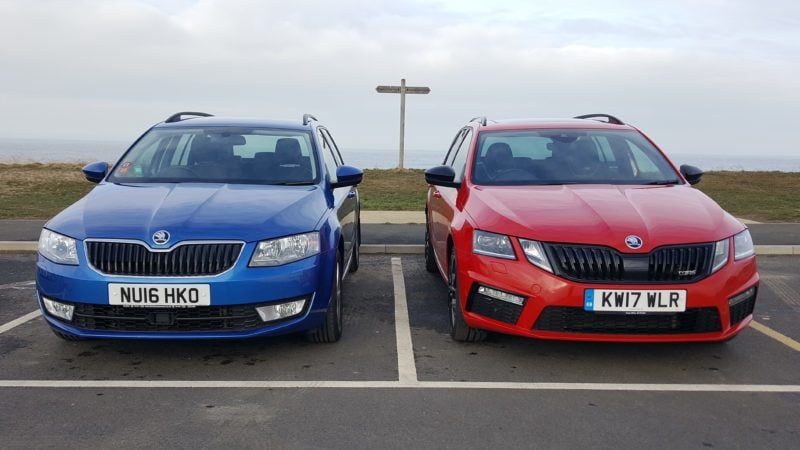 Typical sporty car on the road then?

Even though those wheels look huge and the tires tiny, the Octavia’s ride is not harsh by any stretch of the imagination. In fact, it doesn’t feel that much different on the road to the regular Octavia, like the diesel example in some of our images. We’ve heard less flattering comments on the saloon and the auto DSG models, but in this manual estate it’s a nice ride. It’s not exactly cossetting, but you can clock up some huge miles without any particular stress.

There’s an elephant in the room though – or rather a button ahead of the gear stick. The “vRS” button puts the car into Skoda’s version of a race mode and, yes, that does come with some suspension stiffening.

The good news is that even on British roads, this added stiffness isn’t to excess. It livens up the car in the bends, but doesn’t sacrifice much by way of ride quality. For that matter, it even cures that annoying front-end damper rebound you get on most modern cars when you drop off a speed bump.

Pretty much everything else the vRS button does is as you’d expect. The steering weights up and the throttle response is sharper. We didn’t test the seven-speed DSG car, but the vRS button alters the shift points on that, and the 245’s new exhaust system gets a bit angrier.

One of the more important things with the 245 though – beyond the 15hp hike – is the fact Skoda has fitted an electronic LSD from the Golf GTI. This is at play all the time, but it’s particularly noticeable in vRS mode. As you feed in the power and load up the outside tire, you can really feel the diff nosing you tighter into the turn.

Even in normal drive modes though, the vRS is a lot of fun to drive. It feels a lot lighter than it is, especially under braking – although the 245’s larger discs might come into the mix there. It probably shouldn’t be a surprise how good the vRS is to drive, even as a wagon, as it is after all very closely related to the perpetual hot hatch benchmark of the Golf GTI. 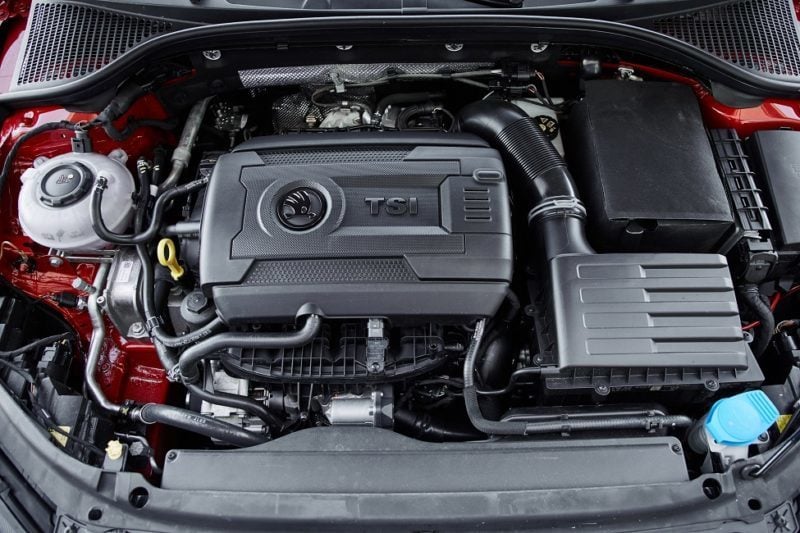 This is a bit of a double-edged sword. First, the bad news: take the Skoda badge off (and the vRS ones) and chances are you couldn’t tell it apart from a Volkswagen or SEAT interior.

That’s pretty much all the bad news, and how relevant that is really is up to you. Yes, it’s a shame that there’s not so much of a distinctive brand identity, but the counter to that is it’s a pretty good interior whatever brand it’s in.

The vRS 245 does get some neat sports seats, with Alcantara trim and vRS logos. They’re heated and electrically adjustable in the front. There’s an eight-inch touchscreen infotainment system as standard, with integrated WiFi and navigation. You’ll find a special vRS mode in the system’s trip computer that includes a lap timer – just what every estate car needs…

There’s a nice LED ambient lighting system with ten colors – but no purple; naughty Skoda – and a whole host of vRS badging about the cabin. In fact other than that and the metal pedals, you’d be hard pressed to know you were in a sporting model.

It’s still an Octavia at heart, so you get the cool little features you find on any other Octavia. This includes the removable LED torch that doubles as lighting for the trunk, and grippy cupholders that allows you to open plastic bottles one-handed. There’s an ice-scraper in the fuel filler cap — which came in rather useful during our review — and an umbrella under the passenger seat. Oh, and an obscene 610 liter trunk space, opening to 1,740 liters with all the seats down. 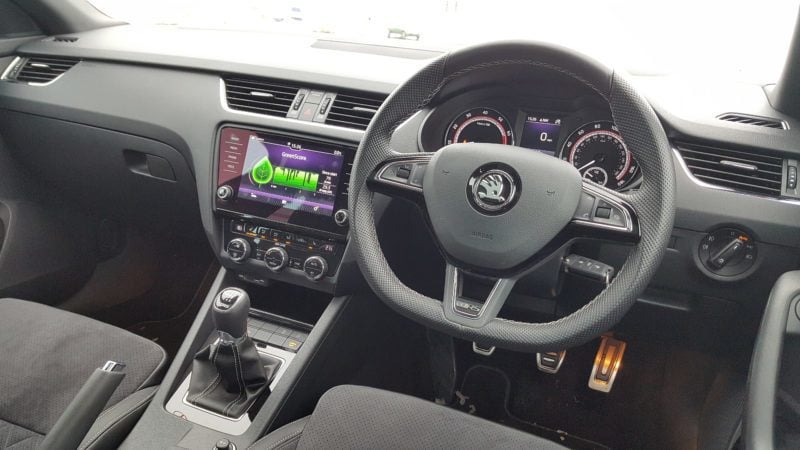 The police. There’s not a lot of cars out there that the cops – at least in the UK – like more than the Skoda Octavia vRS, especially in estate form. It’s for this reason that people tend to drive slowly around you when you’re in an Octavia vRS, in case you’re an unmarked police car.

What’s good for the fuzz is great for the rest of us too. Generally the Octavia is a perfect family car, more so as an estate. Chuck in the vRS performance and you’ve got one of those hard-to-beat all-rounders that would suit just about anyone as an only car for all purposes. The only thing missing from the mix is four-wheel drive…

Surprisingly, given the rather enticing mix of talents, there’s not a lot out there that directly rivals the Octavia vRS estate. Most come from within the wider Volkswagen family, but even then there’s nothing really ticking exactly the same boxes.

It’s likely buyers will look at the more expensive and more powerful SEAT Leon ST Cupra and Volkswagen Golf R Estate. There’s also the larger Skoda Superb 280, but that requires an entirely different budget. The same applies to the BMW 330i Touring and Audi A4 Avant 252PS, and the Octavia has the beating of either in roominess.

The most natural rival is the Ford Focus ST Estate. However, Ford recently replaced the Focus and there’s no ST or estate version yet, although the old one is still available – likely at a discount too. Beware that the Ford’s trunk is much smaller and you can’t tow with the ST due to the central exhausts. 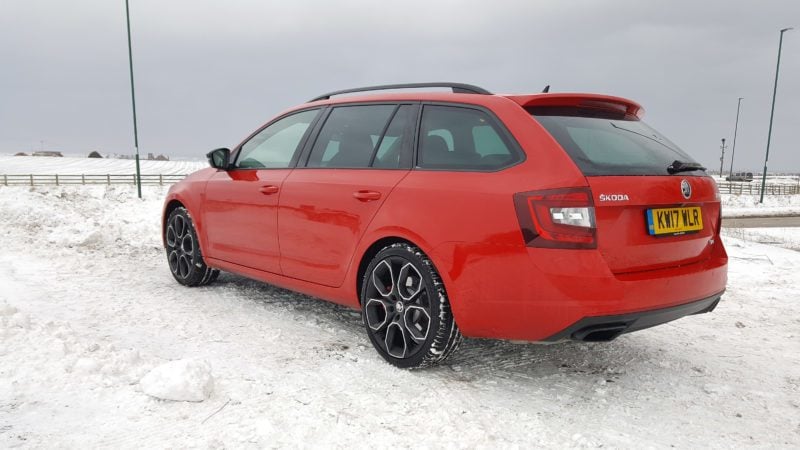 It’d take a lot more than a week to come up with something we don’t like about this car. And we might still be scratching for something actually bad to say.

Okay, perhaps if you’re a “driving enthusiast”, you’d prefer something a bit more tail happy, and — yes, fair enough — the Octavia vRS isn’t the ultimate in shouty, lairy performance cars. The ride isn’t perfect either, and the 19-inch wheels do take a little bit away from the sort of ride you get in a regular Octavia, but not enough in day-to-day driving to whine about it. Unless you have it in vRS mode everywhere.

Ultimately, the Octavia vRS 245 is one of the most usable performance cars out there, and in this estate bodied model, one of the most practical. Never mind jack of all trades, Skoda’s got a king.

The Octavia vRS 245, in wagon form, is one of the best all-round cars on sale today. 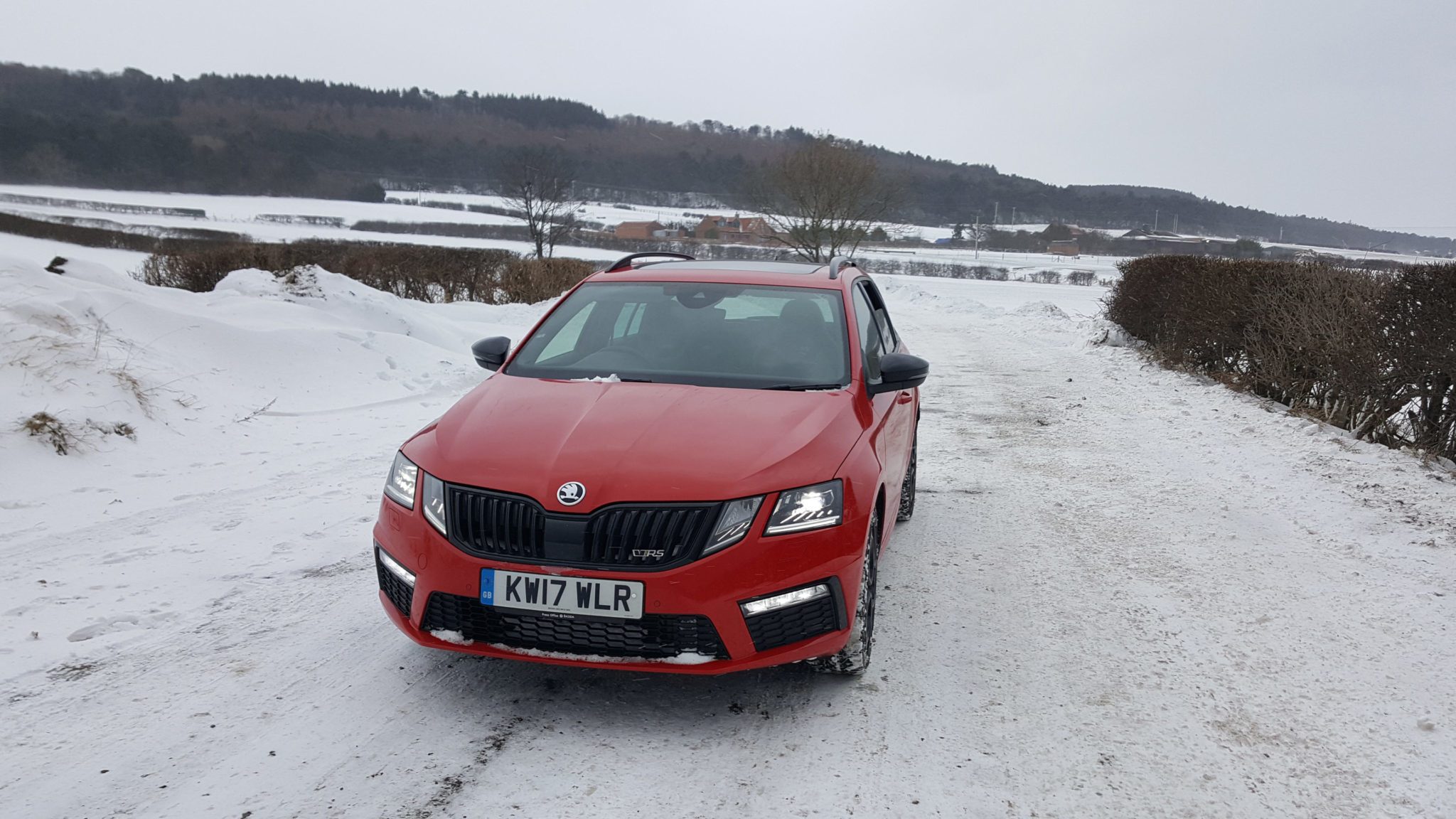 Performance
Shucks speed almost as impressively as it gains it. Your dogs won’t be as happy about it, but this is a performance model that does exactly what it says on the tailgate.
Ride & Handling
Not the last word in handling or ride quality, but it’s impressive enough in both departments that you won’t mind. That’s a rare combination to find.
Space & Comfort
One of the roomiest cars money can buy, and the most spacious of all in this sector. Interior is perfectly suited to long trips with five people and all their luggage.
Equipment
There’s so few options to add to the vRS 245, because it already has just about all of the equipment Skoda can fit. The sat-nav upgrade is expensive and unnecessary, so stick with the standard trim.
Value
We’re not aware of much that can go this quickly, fit as much people and stuff, and has as much kit on board for anywhere near this price. Almost a bargain.