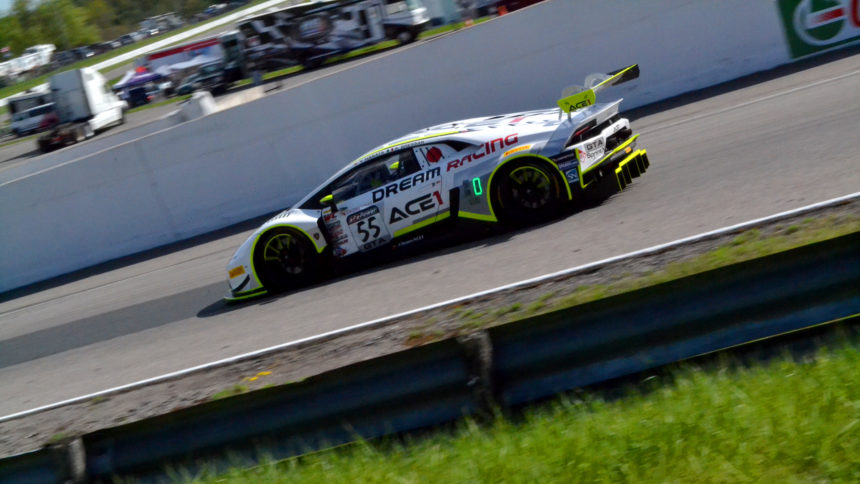 Canada’s favorite word is “sorry”. It’s so pervasive we literally have a law on the books that uttering it isn’t an admission of guilt. But you wouldn’t know it at Canadian Tire Motorsport Park — or more affectionately, simply Mosport, its original name. No, here, about an hour outside of Toronto, one word rises up above the trees:

I’m at Mosport for the Victoria Day Speedfest. By the time the final checkered flag flies on the Canadian Touring Car Championship Sunday night, I’m a sunburnt, squinting, partially deaf version of the person that arrived the day before. And it’s awesome.

Mosport is Canada’s oldest continuously-operating race track. Hosting its first race in 1961, the 2.46-mile circuit has played host to Formula One, Can-Am, NASCAR, sports cars, and even superbikes. For the Speefest weekend, there’s no less than six series taking part:

The variety on offer is impressive enough. But we’ll get to that soon enough. As it turns out, there’s plenty of other reasons Mosport is the best place for a car lover to visit north of the border. 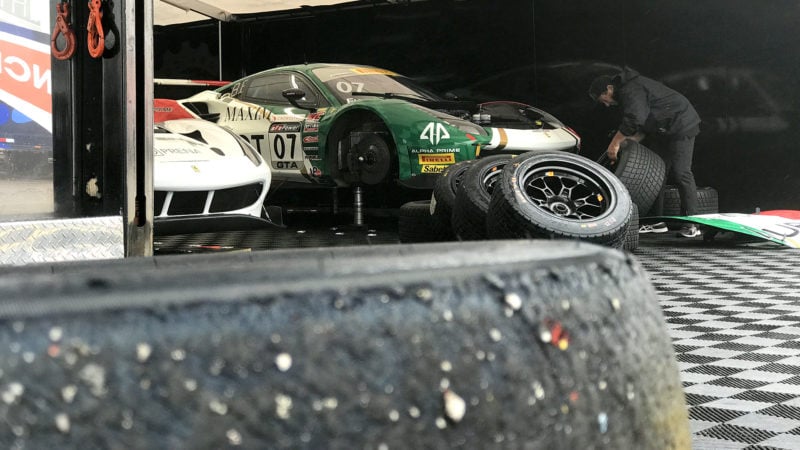 It’s a foggy, low-visibility scene when we arrive on Saturday, but it’s hard to miss the team transport trucks. That’s because we’re parking a few feet away.

Mosport is a Goldilocks length: you can easily walk around the whole track, so it’s easy to find your favorite spots. During the races, there’s plenty of prime viewing locations dotting the circuit. The top or bottom of Clayton Corner (Turn 2), with its drastic, diving downhill left, makes for great photos (and plenty of backfire). The Moss Corner complex (Turns 5A, 5B, and 5C) may be the slowest part of a lap, but that just means more jockeying for position.

The NASCAR race in particular has tons of action at Moss. The cars dance on the edge of adhesion coming down out of Turn 4, with the V8 soundtrack flaring up on the downshifts into 5A. The bravest of drivers go two wide here, playing the waiting game before they can floor it down the long back straight.

On the penultimate lap of the race, second-place Andrew Ranger gets over-eager, putting his nose into the door of leader Kevin Lacroix’ Challenger. We can practically see Lacroix’ frustration. 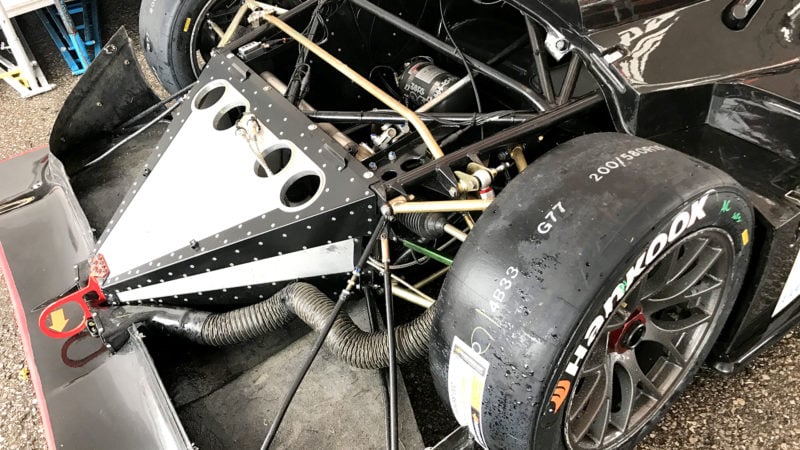 This is a race track, not a private club. We stroll through the main paddock between races. A Ferrari 488 gets a new pair of sticky shoes as we walk by a whole row of them. Further down, the entire front section of a Radical’s body sits daintily on the tarmac, engineers working away on the front suspension. The air may be heavy with fog, but it smells of high-octane fuel, and air guns punctuate the relative silence.

Fans are welcome to pop into most team’s work zones. I could hand the tools to the guys tinkering on the Radical’s suspension, I’m that close. But the highlight is watching a father dropping his son into the driver’s seat. The little guy can’t be more than six or so. The team encourages him to look around his new setting, fiddle with the wheel, and peer over his shoulder at the engine. As dad hoists him back out, smiling from ear to ear, you just know what’s happened. He’s a car guy now. 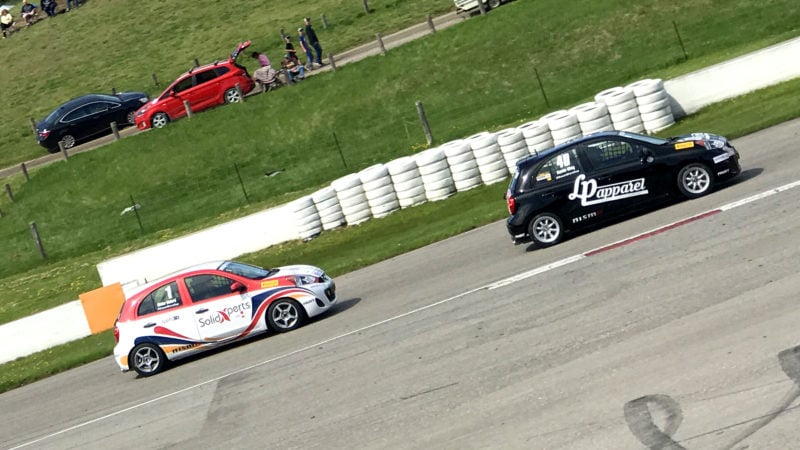 Don’t roll your eyes. The Micra Cup is awesome.

These are essentially road cars, with only a handful of modifications needed to make them track-ready. The cheapest new car in Canada — it starts at $9,988 CAD — the Micra only generates 109hp. The flip side is that means there’s only two, maybe three braking zones an entire lap. Otherwise, these little buzzboxes are foot-to-the-floor.

It’s quite a palate cleanser after the big, angry NASCAR field. But conservation of speed is its own challenge. The tiny little contact patches and dearth of power mean the drivers have to plan passes multiple turns in advance. Picking their line and staying neat is of the utmost importance; they can’t just rely on a blip of the throttle to make up for any minor errors heading out of a corner. 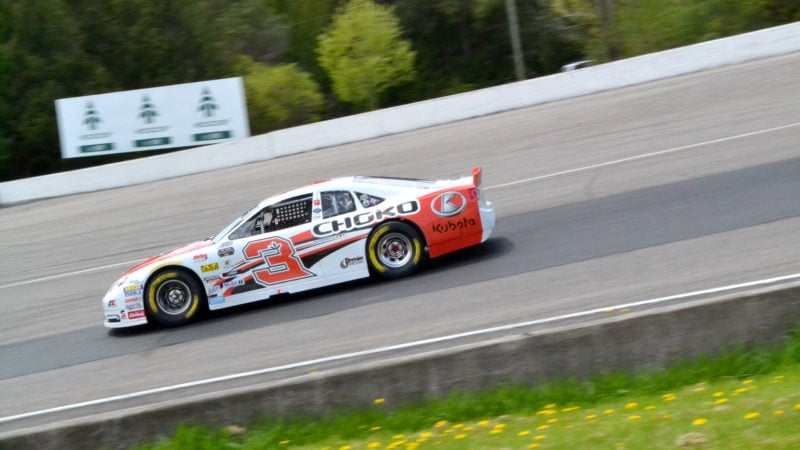 The age of mass connectivity makes it easy to get an idea of what a modern supercar is like. We know it’s not a replacement for the real thing, and that’s especially true of the sounds.

This is even more accurate for race cars. No YouTube video can accurately represent how insanely loud some of these cars can be. The cars most likely to cause genuine pain — even if they sound utterly brilliant — are the Porsche 911 GT3 Cup cars. Bizarrely, this pack of flat-six terrors sounds even louder than fellow Canadian Scott Hargrove’s 911 GT3 R in the Pirelli World Challenge races. There’s that recognizable Porsche sound, but shifted up two octaves, and so loud that you can hear them from across the entire circuit. Bring earplugs.

Even with the protection in, you’ll be digging into an aural feast every race weekend. I grew up in the country, where muscle cars were king, so the rumble of three dozen V8s getting into formation for the start of the NASCAR race is equal parts addictive and nostalgic. It’s a dirty, uneven noise at idle, not at all high-tech and all the better for it. I’m in the pedestrian bridge before T2 early in the race, where the cars crest the highest part of the circuit just before getting on the brakes. When the pack crosses underneath us, I feel it in my bones. 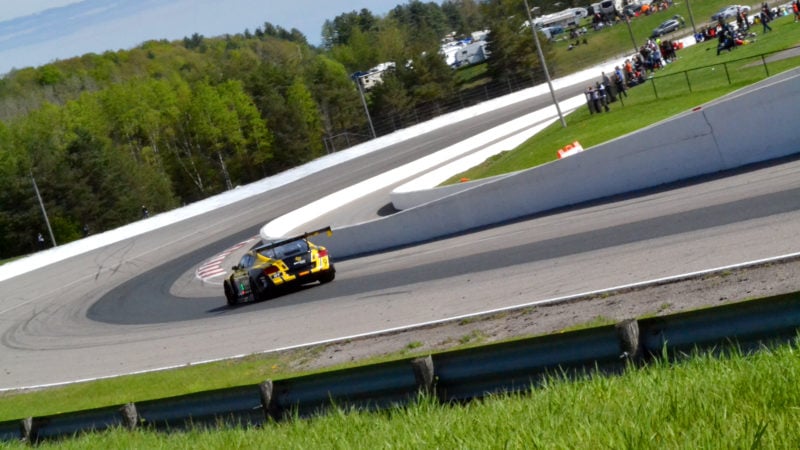 In the PWC GT race, a Huracan makes up for its lack of competitive pace with a piercing shriek to rival the Cup cars. It’s so much more intense than the R8 LMS up-pack — despite a similar engine — and its rifle fire downshifts put a smile on my face every single lap. Think classic V10 F1 at half the rpms and you wouldn’t be far off.

The rest of the field aren’t exactly shrinking violets. The closest would be the Ferrari 488 and afore-mentioned Audi: the former is shockingly quiet for a Prancing Horse, and the screaming Lambo overshadows the latter. But then you have the howling 911, and the delicious juxtaposition of the modern-looking AMG GT3 spitting out a ’60s Trans-Am soundtrack.

Easily the most unique is the Bentley. The turbos don’t mute it like the Ferrari, and if you told me the acres of hood hid a 20-liter engine instead of a puny four, I wouldn’t question it.

I’ll ask you to forgive me for this next sentence: remember The Phantom Menace? Specifically, the pod race? Bad guy Sebuluba’s racer had this unique doon-doon-doon-doon as it passed by the camera. The two Conti GT3s do a fantastic impression, all big-lunged menace, doppler effect reverberating that bassy thrum as they drive off. It’s unlike anything else I hear all weekend.

We’re All Here For the Same Thing

Back to the Radical garage, and the little guy grinning as he finds himself in the driver’s seat. It doesn’t matter the age of the fan, or the discipline they came to watch. We all just love the idea of pushing a car to its limits.

The collection of cars you find scattered across Mosport’s fields is a testament to this too. Any day that starts by parking alongside a Hennessey Venom Viper, only to find an LS-swapped R34 Skyline, Ford Model A, and super-clean 240Z within a 15-minute walk is going to be a good one. Over in the paddock, Nissan’s got a pristine Fairlady 2000 parked up beside the Micras. Not far off, the 700hp Porsche 911 GT2 RS is on display. There is, quite literally, something for everyone.

I’m happy to report that a lot of the people at the track over the weekend are young, too. They’re not quite dropped-into-a-Radical-seat young, mind, but they can’t be more than a handful of years out of high school. There are big groups camping, and it’s not just guys either. All of them have seemingly missed the memo that young people don’t care about cars.

That’s something I hope they never have to apologize for.

Watching the races is one thing, but there’s also opportunities to experience Mosport first-hand. Plenty of different track days or driving courses take place at CTMP from early spring right through autumn. If you want to master the ten corners yourself, you should check out the official CTMP calendar.

Big thanks to Sam and Laurance for making the weekend possible!

Pirelli World Challenge
2 Comments Discuss this post in our forums...
Test Your Badge Knowledge With Our Car Logo Quiz