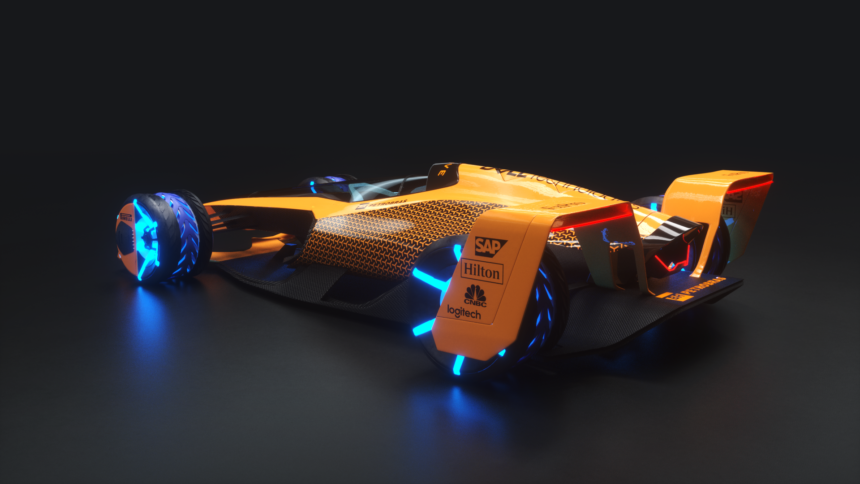 Wipeout on Wheels: MCLExtreme is McLaren’s Vision For Formula One in 2050

Formula One is a sport right at the cutting edge of technology. The systems and materials used on today’s race cars will inevitably reach the road in a few years — or sooner, in some cases.

The pace of change is rapid too. Side-by-side, the cars of 1990 are almost unrecognizable next to the current crop. What will F1 look like in another 30 years? McLaren thinks it has one possible answer: MCLExtreme. 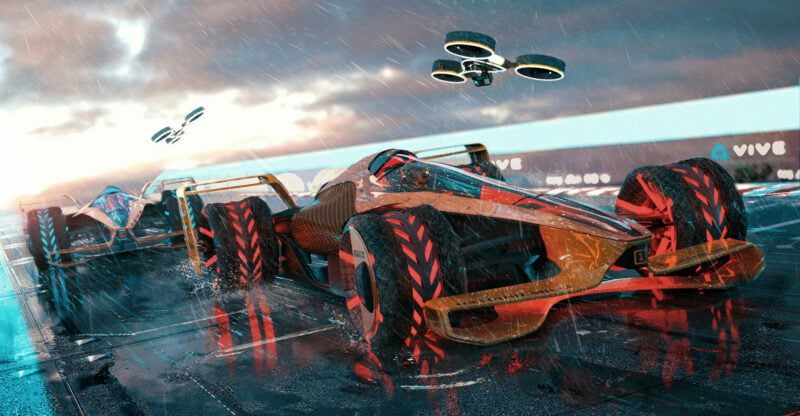 It’s the result of a research project conducted by McLaren Applied Technologies. This is the arm of the McLaren business that deals with practical applications of the advanced tech involved in building McLaren’s road and race cars. MAT asked F1’s fans what they needed and wanted from the sport and, along with trends in the motor industry, used that to build its vision.

MCLExtreme itself is an all-electric race car. That’s partly informed by the fact that governments around the world are looking to ban standalone combustion engines from road cars in the next decade or so. MAT has form on this front: it supplied the powertrain for the entire, inaugural Formula E grid and currently supplies the battery for the Gen2 car.

Instead of carrying a huge power supply, MAT envisages MCLE using inductive charging. The wheels contain induction loops for picking up charge from the ground to replenish the battery. McLaren even thinks that this could be part of a pit stop strategy; if the pit lane alone contains the charging pads, cars will have to pit for extra charge. This adds a strategy element — do you drive slowly for more charge, or quickly for a smaller time loss?

“Whether it will be possible in 2050 to fully charge the battery of a grand prix car from flat in less time than it takes a current Formula 1 car to complete a flying lap around the streets of Monaco is difficult to say at this stage. But charging about 10 to 50% of the battery in around 10 to 30 seconds is conceivable.” 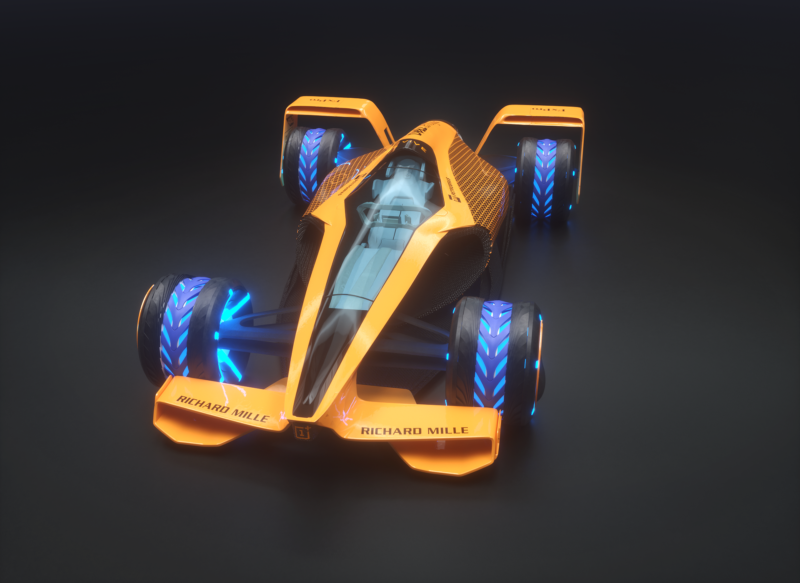 MCLE uses variable geometry sidepods. In the slower regions of the circuit, these open wide to feed cooling air into the car and provide lateral stability. Move onto the straights and they shrink to reduce drag. Although McLaren doesn’t state MCLE’s potential power output, it does say that it would hit 310mph in this configuration.

This partly helps the more simple look of the MCLE’s visible wings. Although it sports pretty large aerodynamic aids, they’re less fussy and intricate than on the current cars. Instead it relies more on ground effects, with the floor and diffuser replacing the visible carbon-fiber razor blades of today. 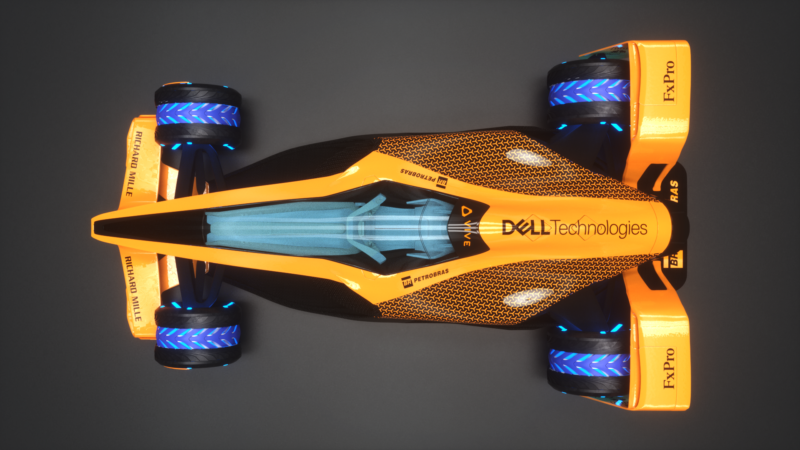 If you’re a little self-conscious, you might want to avoid driving in the 2050 season. The MCLE’s entire cockpit is transparent, revealing the driver’s full body at all times. This means fans can watch how their favorites manage both the wheel and pedals, shining a spotlight on the skills and coordination needed.

The driver also wears a figure-hugging g-suit. Made with complicated materials that would score well in Scrabble, the suit is necessary to allow the driver to sustain over 5g on a regular basis. It might also provide cooling over the course of a grueling F1 race. An integrated helmet features a head-up display, which would replace the voice in the ear of your race strategist. The bad news is you can’t tell the augmented reality AI to leave you alone if you know what you’re doing.

One final feature to lay the driver bare is mood lighting. The car can read the driver’s emotional state at all times and project this by way of colored lighting. A calm driver might feature blue lights, but one in the heat of battle might glow red; that could prompt another driver to go in for the kill and make the pass while their rival is upset. 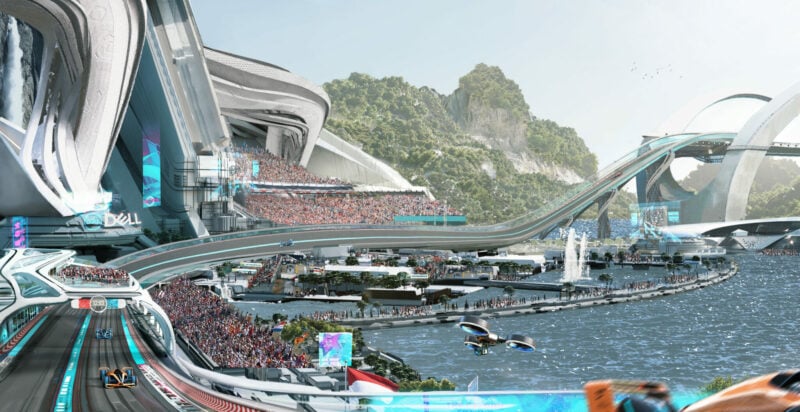 But where would these cars race? MAT says fans have expressed a desire for longer, wider tracks, while also being as close to the action as they are on city circuits. The slower, narrow city tracks, confined by geography don’t gel with the 310mph MCLE cars, so MAT envisions aggressively banked corners.

“Smart cities will give us the chance to put the track action on people’s doorsteps. We’re going to see more racing take place where the fans are, as part of a continued effort to bring the show to them – and because the cars will travel at even more ferocious pace than is currently the case, it raises the possibility for race tracks to span far greater distances.

“Why confine the grand prix cars of tomorrow to the tracks of today? The Italian Grand Prix of 2050 would still run through the heart of one of the largest historical parks in Europe, but go on to scythe its way through the streets of Milan city centre, before making its way back to Monza’s leafy park.”

Along with glass-lined pitlanes, so fans can see the cars charging up as they drive past, the tracks might also feature “blackout zones”. These would cut the driver off from their on-board AI and pitlane advisors, forcing them to “drive alone and unaided” — one of F1’s core tenets. 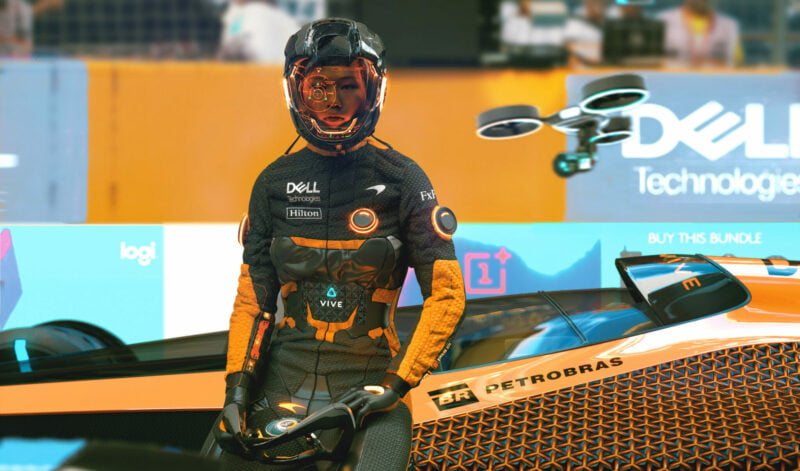 McLaren also sees esports as integral to the future F1 team. The McLaren Shadow drivers could perform recce activities, and by driving the cars before the race, their data could feed into the drivers’ AI to inform strategy.

Only time will tell how much — if any — of this will come to pass, but it’s certainly a bold vision for F1’s centenary year…

Formula OneMcLaren
23 Comments Discuss this post in our forums...
Test Your Badge Knowledge With Our Car Logo Quiz