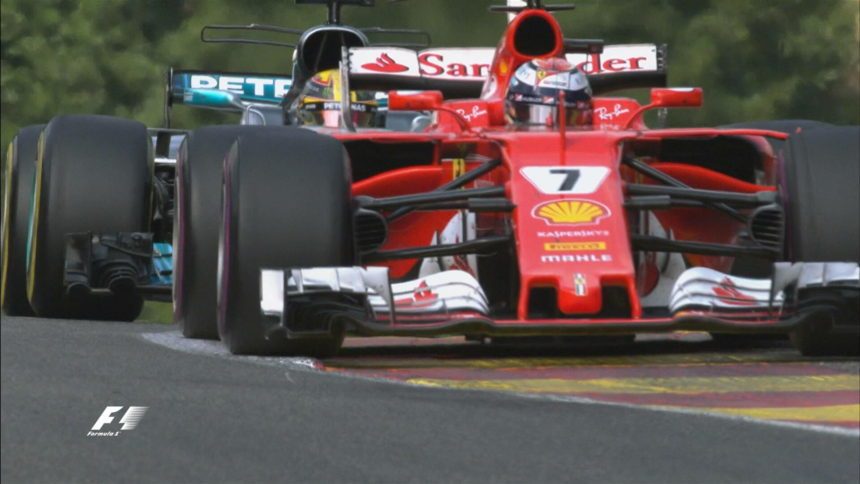 The home of fries, bricks, chocolate and tennis players played host to arguably its greatest export — motor racing. As is the norm at the Circuit de Spa-Francorchamps, the race threw up lots of action.

The layout of the legendary Belgian track lends itself to great overtaking. The famous Eau Rouge corner followed by the high-speed Kemmel Straight promotes many battling opportunities. Most notably, the race featured a three-wide thriller between Esteban Ocon, Fernando Alonso and Nico Hulkenburg. Oh, and Ocon almost riding the wall before Eau Rouge. His team mate Sergio Perez gave him no room. An airplane crash was narrowly avoided.

Lewis Hamilton held off Sebastian Vettel on lap one and the running order at the front hardly changed from there. The man who clocked his record-equalling 68th pole yesterday took his 58th win today; 200 grands prix into his illustrious career. Hamilton also took his first DHL Driver of the Day award this season — an honor voted on by the fans.

It was some masterful race management from the Brit. Hamilton kept Vettel at arm’s length for the majority of the race, keeping the gap between one and two seconds to his championship rival. As we know, when Lewis is in the right frame of mind there’s no stopping him.

Kimi Raikkonen was ticketed with a ten second stop/go penalty for failing to slow for yellow flags. One could argue that this penalty was a little harsh. It was the same penalty handed to Vettel after he dangerously drove into the side of Hamilton in Baku. Or maybe Vettel’s penalty was lenient. Nevertheless, it was a near race wrecker for the Finn.

Another bout of self destruction in the Force India team prompted the deployment of the Safety Car. Esteban Ocon never lifted during the run down to Eau Rouge, going for a gap that wasn’t there next to his team mate Sergio Perez, just as he had on lap two. Ocon’s front wing punctured the right rear tire of Perez at high speed. The debris from the wing almost went over the catch fence.

Ocon complained over the radio, but once again proved his inexperience. It was an incident very reminiscent of their clash in Baku. The rivalry between Ocon and Perez is arguably hotter than what we’re seeing from Hamilton and Vettel.

After saving a set of the grippy ultra soft tires in qualifying, Vettel was able to put them on pitting under the Safety Car. Hamilton had no choice but to change to the slower but more durable soft tires. With a time delta of 1.4 seconds between the two tire compounds, the race had seemingly fallen into Vettel’s hands.

However, even with the extra traction of his rival’s tires, Hamilton stayed in front. After the restart, it was a drag race between the two on the Kemmel Straight. Vettel got in front on the outside but Hamilton’s superior Mercedes engine kept him in front of the German. Sebastian wouldn’t challenge Lewis again.

It’s a Formula One race in 2017 so we must have a constant — a Max Verstappen retirement. The man whose season can’t seem to catch a break. Spa resulted in Max’s sixth retirement in twelve races this year. Verstappen is like to a caged lion in the Red Bull team. The driver market is sewn up for next year, but the flying Dutchman is dying for a top drive.

Verstappen’s team mate Daniel Ricciardo had a much better result. A well-earned podium that was manufactured by a great move after the Safety Car came back into the pits. He came out best in a three-wide battle on the Kemmel Straight, passing both Raikkonen and the Mercedes of Valtteri Bottas.

Speaking of constants in F1, another is the retirement of at least one McLaren car. Alonso went out on lap 27. The Spaniard was very fiery over the radio just after the start of the race, asking his race engineer to not talk to him for the remainder.

Today’s result continued a couple of trends: no driver in this 2017 season has scored back to back wins and Hamilton’s only podiums have been wins. It’s go big or go home for the Brit, while Vettel has checked in as Mr. Consistent.

With Bottas’ poor result today, it’s turning into a two horse race in the championship. The red prancing horse, leading by a nose over the silver arrow. Every moment, every day counts. Hamilton and Vettel are so closely matched that the deciding factor will likely be unreliability or an unlucky crash.

Monza is next — the home of Ferrari and a place where it always finds that bit extra. Formula One is back and it’s returned just how it left us: delivering a memorable title fight between two of the best drivers the sport has seen.

If you want to replicate some of the Spa action, check out our review of the official Formula One game. We think the game is one of a kind! 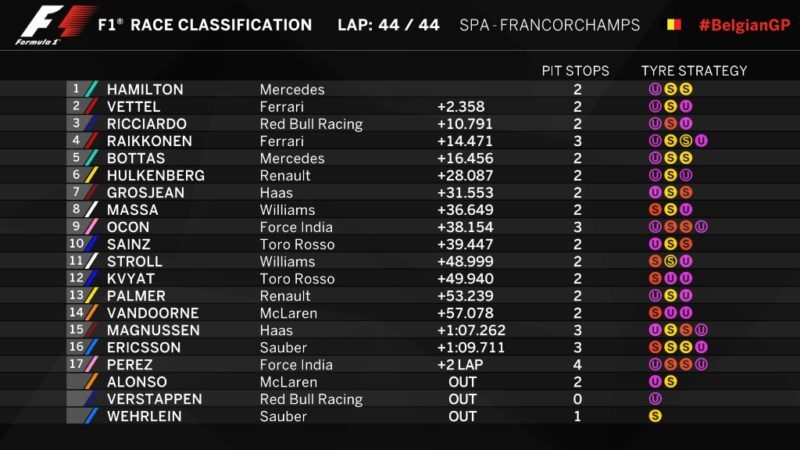 F1 2017 Season
250 Comments Discuss this post in our forums...
Test Your Badge Knowledge With Our Car Logo Quiz