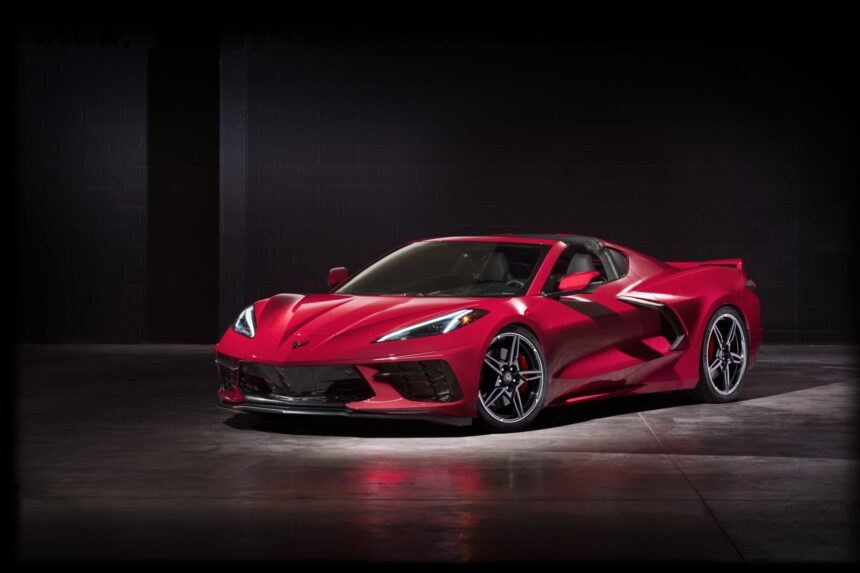 We’ve known about it for what seems like ages, but now it’s real: Chevrolet has taken the wraps off the very first production mid-engined Corvette.

This is arguably the biggest change to Chevrolet’s flagship sports car in the entirety of its 67 year history. Swapping the engine out of the nose and dropping it behind the two seats not only will vastly change the driving dynamics of the Vette, but it does quite a lot to the styling as well.

It’s still recognizably a Corvette, sharing many styling cues with its immediate predecessor, the C7. The C8 Stingray maintains the familial creases on the hood, starting from the redesigned dual-flag emblem and stretching back to the windshield. A set of angular headlights flank this, more horizontal than the C7’s narrow eyes.

Naturally the flanks see quite a change in character. In come big, angular side intakes to feed that mid-ship engine and the radiators. The contrasting trim on the intake mimics not only the treatment of the C7’s vent behind the front wheels, but also acts as a nod to the Z06. 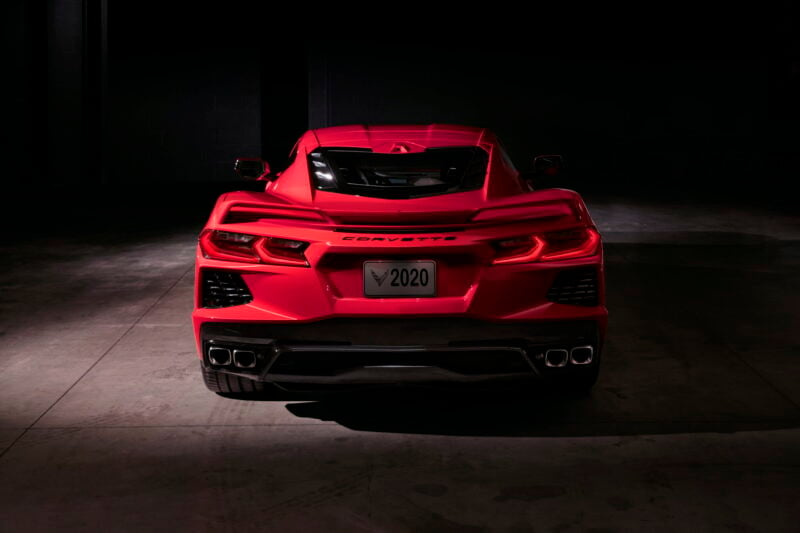 Out back there’s a lot of Camaro influence. Squishing the pony car’s tail onto the wider rump of the C8 makes for fussy lines, especially with the R8-aping vents just below the taillights. The Corvette once again uses plenty of black trim to cut the visual heft out of the lower section of the rear though.

Not forsaking its affordable, daily-driver sports car reputation, the C8 can still swallow a decent amount of luggage. A rear cargo area fits the removable roof panels, while a large frunk is available too. Both of these are made from a special fiberglass mix that’s so light, if it were formed into a brick, it’d float in water. Combined, they’ll even fit the five-piece luggage set Chevrolet offers for the current Vette.

While it’s all change for the engine location, the heart itself sticks to the script. There’s no downsized, turbocharged mill here: it’s another 6.2-liter, naturally aspirated, small-block V8. Dubbed LT2, the C8’s engine produces 495hp and 470lbft with the Performance Exhaust option. It sits low in the chassis, no doubt thanks to the dry-sump lubrication system — standard on all C8s. 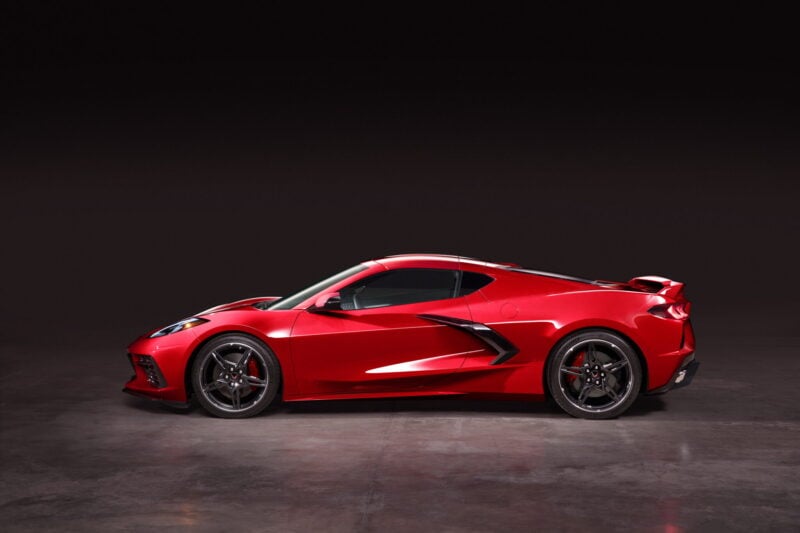 Power hits the road via a standard eight-speed dual-clutch transmission. This drive-by-wire system will be the only transmission choice for the C8 Stingray, nixing the seven-speed manual found in the current car. According to Chevrolet, the first six gears are closely stacked for performance use, while seventh and eighth are better suited for highway work. A set of paddles sit behind the steering wheel.

The new transmission will offer quicker shifts than any previous model, allowing the Z51-equipped C8 Corvette to click off the run to 60mph in less than three seconds. That’s frankly astonishing for a sub-500hp car that likely weighs more than the one it’s replacing — say 3500lb or so. The C8 uses a staggered wheel and tire setup with 19-inch wheels up front and 20-inch items out back; the latter wrapped in 305-width tires. 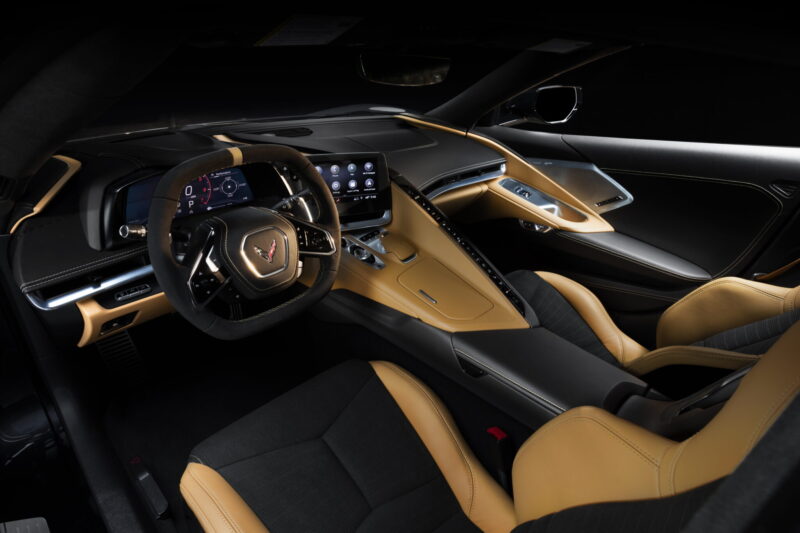 Inside, the 2020 Corvette Stingray gets very driver-centric treatment. A squircle-shaped, two-spoke steering wheel is the first thing you’ll notice, with an all-digital instrument panel behind it. Another large screen sits to the right of the driver, angled very clearly towards him or her. Even further out is a raised line of buttons. It looks like passengers may feel a little excluded in here, but we’d have to see for ourselves to really make that call…

Chevrolet seems particularly proud of the interior quality, with nearly every surface being either suede, aluminium, or real carbon fiber. There will be three seat choices — GT1, GT2, and Competition Sport — and six interior color themes. C8 buyers will have an unprecedented 12 exterior colors to choose from as well.

Other tech features will include a 14-speaker Bose sound system, and a high-tech rear-view mirror which uses a hatch-mounted camera. There will also be a nose lift feature, capable of lifting the Stingray’s front end up by two inches. The trick here is that it will be GPS enabled: every time a driver activates it they’ll have the option for the car to save the location. From then on, it will lift automatically. 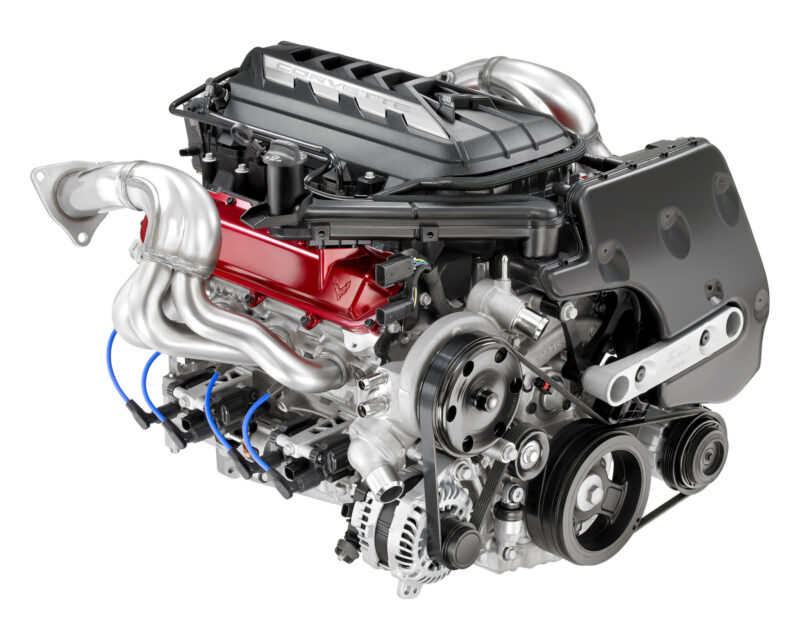 Chevrolet finished off the unveiling with a tease of what’s next. Specifically, that was a glimpse of the upcoming convertible, as well as the new C8.R race car putting in work on the track. Yes please.

Production will begin later this year — shockingly, in both left and right-hand drive configurations. Chevrolet is already taking deposits from interested parties, and while it hasn’t announced exact pricing yet, it has confirmed the base price will come in under the $60,000 mark. That’s an impressively small jump from the current car, which starts at $56,995.

ChevroletCorvette
1167 Comments Discuss this post in our forums...
Test Your Badge Knowledge With Our Car Logo Quiz

FIA WEC 5 Mar 4 by Andrew Evans
The organizing body of the 24 Hours of Le Mans, the Automobile Club de l’Ouest (ACO), has announced that it is postponing this year’s race by a little over two…

Formula One 194 Mar 3 by Andrew Evans
Aston Martin will be making its return to the F1 grid this season after 60 years away, and has today unveiled the car it will use for the 2021 season.…

Formula One 194 Mar 2 by Andrew Evans
In the second of today’s two F1 car launches, the technically new Alpine outfit has revealed its A521 contender for 2021. It’s the first ever F1 car to wear the…

Formula One 194 Mar 2 by Andrew Evans
Defending seven-time world champion Mercedes-AMG has revealed the car that most will expect to take the 2021 title too. It’s called the W12, and no Mercedes hasn’t gone crazy and…

Formula One 194 Feb 23 by Andrew Evans
Red Bull is the latest team to unveil its car for the 2021 Formula One World Championship, taking the covers off the RB16B today. As the name might suggest, the…

Formula One 194 Feb 22 by Andrew Evans
The Alfa Romeo team has become the third to reveal its car for the upcoming 2021 Formula One season, which it calls the C41. As we’ve seen so far with…

Formula One 194 Feb 19 by Andrew Evans
Red Bull’s junior F1 team, Scuderia AlphaTauri, has become the second team to reveal its 2021 challenger. The car, officially known as the AT02, follows on from last year’s race…