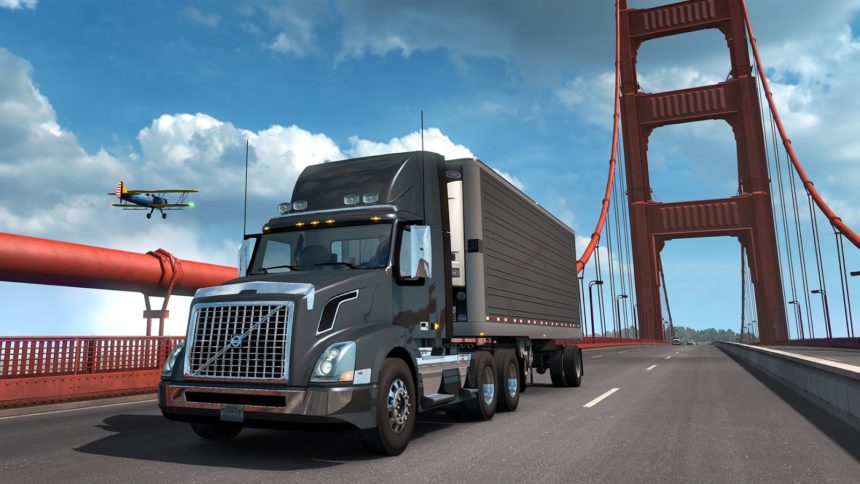 American Truck Simulator is celebrating its three year anniversary this month. As part of the festivities, the team at SCS Software held a live stream to take a look back at the game. Also, it laid out what the future holds for the title as well.

That future looks bright too. Back when ATS hit Steam on February 2, 2016, it had just two states, California and Nevada. Since then, the map has grown substantially by adding Arizona, New Mexico, and Oregon — albeit at a (suitably) leisurely pace.

It’s due to this slow pace, SCS initially thought it couldn’t finish the US in its lifetime. But now it’s changing its tune and for the better. Thanks to a larger development team, SCS believes finishing out the country is now a very real possibility.

So far, we know that Washington is due out sometime this summer. There’s also a second state currently in development that could land near year’s end as well.

What that state is, SCS isn’t saying. But looking at the current maps chances are it’s either Idaho or Utah.

In addition to the growing map, the truck lineup is due to expand as well. Thanks to a newly acquired Navistar license, the International Lonestar will join the game over the next few months. There’s also another mystery truck in development, which is rumored to be the Freightliner Cascadia.

The trucks aren’t the only thing either. SCS recently acquired a license for a trailer company in the US. This means a trailer pack is on the horizon too. Given its large market share in the trucking industry, we expect it to be Great Dane, UTM, or Wabash.

Unfortunately, one thing we will not see this year is a truck tuning pack for ATS. This is a bit of a disappointment since customizing your rig is a huge draw for players of the game. Also, when compared to Euro Truck Simulator 2, ATS is sorely lacking options. However, SCS did say a pack could make an appearance in 2020.

Along with all the content in the works, SCS also talked about some of the gameplay options it’s working on. It hopes to add new facilities and cargos for players to haul across the map. The most surprising of these are rocket parts, which sounds pretty cool.

The team is also working on creating more special transport routes and cargos as well for those who enjoy heavy hauls.

Finally, down the road a bit the team also wants to go back and fix the California and Nevada maps. Since they are now three years old, they could use some sprucing up.

If you’re interested in jumping into ATS, there’s never been a better time. Thanks to Steam’s Lunar New Years Sale, ATS is just $4.99 through February 11. All the DLC is also on sale too ranging from 10-70% off the initial price. Or you can snag the entire bundle for just $26.63.

Gran Turismo Sport 29 Jul 13 by Andrew Evans
Polyphony Digital has announced a new update for GT Sport, which will arrive this week on Thursday July 16. Though 2020 has seemed to drag on somewhat, Gran Turismo fans…