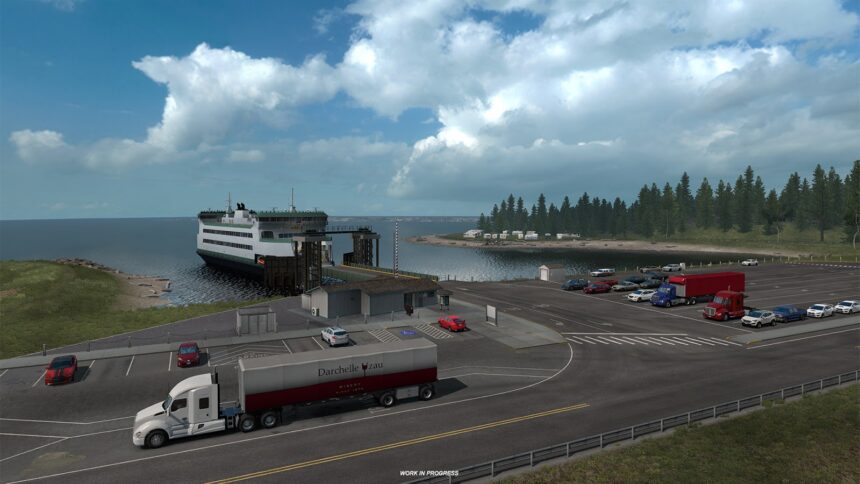 Last October, SCS Software added Oregon as the fifth state for American Truck Simulator. Now with a new batch of teaser shots, it looks like it’s continuing the push northward to Washington.

At first glance, many of the images could really be any number of states. However, there are two teasers in particular that confirm the expansion of the Pacific Northwest.

The first one is the Keystone Ferry Landing. Located on Whidbey Island, it connects the small town of Coupeville to the mainland on the Olympic Peninsula. It also lies within the confines of Fort Casey State Park and should provide the backdrop for one of the DLC’s many landmarks.

In addition to the two landmarks, we also get a glimpse at the economy as well. Like its neighbor to the south, the Washington DLC will continue to focus on logging. This means more steep mountain roads on loose gravel, which will provide a challenge for those veteran truckers. 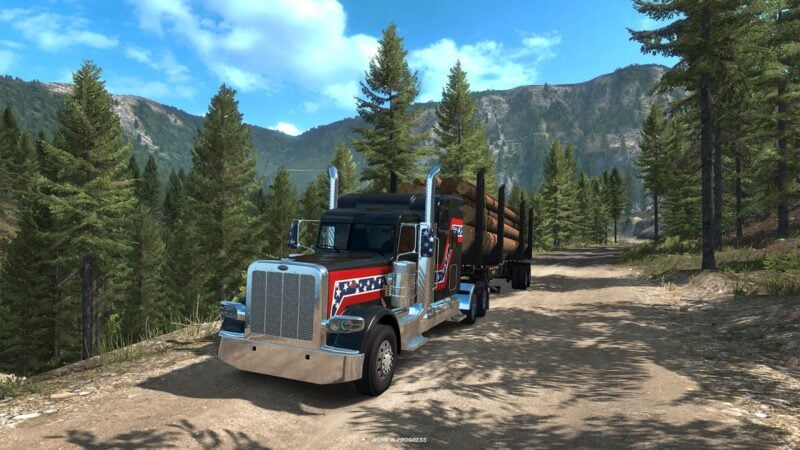 Along with the logging, we also expect some of Washington’s other industries to make an appearance too. Boeing operates a large factory near Seattle and could very well show up as a fictional company. There are also companies like Starbucks, Amazon, and REI that all could get analogs too.

We also expect to see apples, Washington’s main agricultural product, show up on the cargo list as well.

More detail should emerge as the development of the state continues. However, SCS is still a relatively small operation so it still could be several months before we see the final result.

Thankfully, SCS did recently expand its team to include dedicated ATS resources. As a result, this should accelerate the development process a bit. Hopefully, we see Washington make an appearance sometime this summer instead of waiting until the fall.

In the meantime, if you’re looking for a change of pace, you can jump over to the wildly popular Euro Truck Simulator 2. Or if you’re a console gamer, you can wait patiently for Truck Driver to hit the PS4 or Xbox One.

Project CARS 3 11 Aug 3 by Andrew Evans
It’s only a few short weeks until Project CARS 3 is with us and, right on cue, Slightly Mad Studios has revealed more about the car and track content coming…

Hardware 29 Aug 3 by Andrew Evans
Sony Interactive Entertainment (SIE) has officially confirmed that third-party peripherals licensed for PlayStation 4 will continue to work on PlayStation 5. The statement will come as great news to those…

Gran Turismo Sport 494 Aug 3 by Andrew Evans
Given the speed at which 2020 has been passing, it might be hard to believe that it’s the 31st Monday of the year. Nevertheless, a new Monday means a new…

Motorsports 57 Aug 2 by Andrew Evans
The 2018 GT Sport world champion Igor Fraga has had another weekend to forget in FIA Formula 3, after his car broke down during the sprint race at Silverstone. Perhaps…

Gran Turismo Sport 181 Jul 30 by Andrew Evans
The latest GT Sport Time Trials have arrived today, bringing a pair of fresh challenges which this week includes one of the most recognizable cars of the last decade. Our…