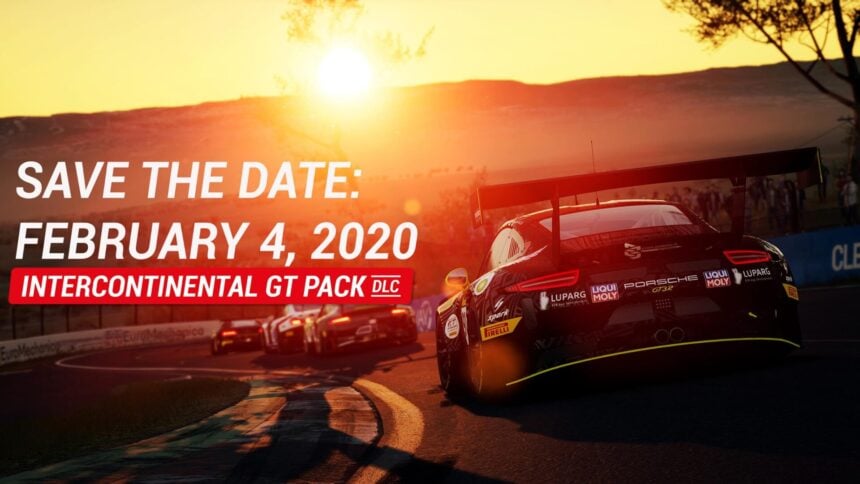 The Intercontinental GT Pack DLC coming to Assetto Corsa Competizione finally has a release date, so mark your calendars for next Tuesday, February 4.

Originally announced at last year’s Tokyo Game Show, the upcoming DLC will add four new circuits to the PC sim. Not only that, the pack also adds 2019-appropriate liveries to the car roster. For a quick refresher, the pack will include the following four circuits:

The past three weeks have been quite the adventure. Following a short term of silence, Kunos Simulazioni began teasing the contents of the DLC, beginning with previews of Bathurst. The following week, it released screenshots of the beautifully-recreated Suzuka Circuit and followed that up with another set of in-game screenshots.

This week, the Italian team previewed another piece of the puzzle with Laguna Seca. Fans of the original Assetto Corsa will no doubt be happy with the return of the renowned circuit, this time up-to-date with its new ownership.

Kunos started the big tease with a preview of the Kyalami Circuit, above, late last year. Located in Midrand, in the Guateng Province in South Africa, the 2.8-mile (4.5km) technical circuit will keep players busy with 16 turns. As a former venue on the Formula One calendar, Kyalami isn’t a circuit to be taken lightly.

To drum up excitement further, Kunos included a little something extra alongside today’s announcement. Aristotelis Vasilakos, head of vehicle handling at the studio got behind the wheel of the Aston Martin Vantage GTE for a virtual lap around Bathurst. Perfect timing as well with the inaugural race of the Intercontinental GT Challenge kicking off this weekend at the Australian circuit.

While we’re still in the dark on the price of the pack, at least we won’t have much longer to wait. The Intercontinental GT Pack DLC releases Tuesday, February 4, and we can’t wait to give it a proper tryout. Stay tuned!

Assetto Corsa Competizione DLC
70 Comments Discuss this post in our forums...
Test Your Badge Knowledge With Our Car Logo Quiz