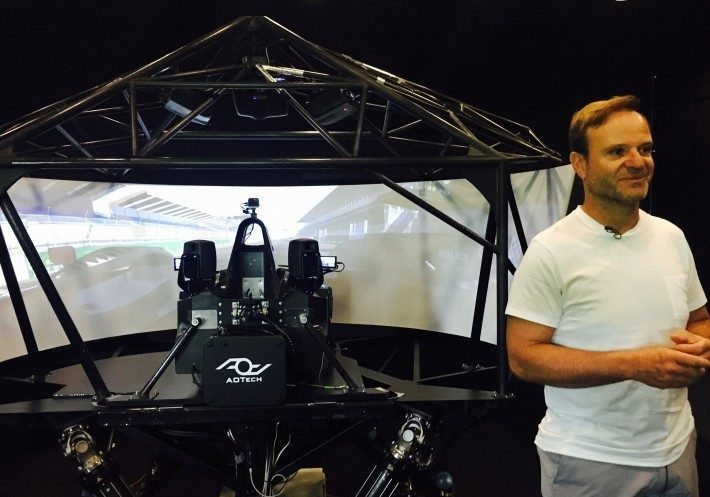 With 322 race starts to his name, Rubens Barrichello handily owns the title of most experienced Formula One driver. Despite never winning the driver’s championship, the Brazilian did finish second in points in 2002 and 2004 as Michael Schumacher’s teammate at Ferrari, and more recently third in 2009 during Brawn GP’s whirlwind single-season campaign.

None of that matters, though, when you’re racing in the 24 Hours of Le Mans for the very first time in your career. Barrichello will be competing in the prestigious endurance event in France on June 17 on behalf of Racing Team Nederland in the LMP2 class. In spite of his accomplishments, he enters as a rookie. And, per the regulations, rookies must satisfy a minimum amount of seat time in the simulator before taking the track.

In the rig, drivers not only learn the layout of the 8.5-mile long Circuit de la Sarthe, but also how to navigate multi-class traffic and the difficulties of night driving. The length of the track creates additional problems, specifically when rain showers come into play. The asphalt could be dry in one sector and soaked in another — so it pays to be prepared for anything.

No doubt Barrichello knows a bit more than the average participant about what to expect. But even the most seasoned racer can learn a thing or two from simulations these days. Just take Fernando Alonso’s run at the Indianapolis 500, for example.

Before Alonso’s rookie orientation on May 3 — roughly three weeks before the event — all the two-time F1 champ had to go on was simulator testing. He had never driven an IndyCar before. By the end of the month, Alonso wasn’t just up to speed; he was in contention to win the thing, right until his engine failed with 21 laps to go. Still, he left the field having led more of the race than anyone else.

Barrichello finds himself in a slightly different situation entering Le Mans, but it’s not hard to draw parallels. He undoubtedly has sports car racing experience, having competed in the 24 Hours of Daytona three times and nearly winning the race for Wayne Taylor Racing last year. But he’s still looking to learn as much as he can before the green flag drops.

“There are some points I got right, others I got wrong,” Barrichello said in an interview with the Automobile Club L’Ouest, which organizes the annual event. “But it is better I do that in the simulator than on the real track.”

24 Hours of Le MansMotorsports
9 Comments Discuss this post in our forums...
Test Your Badge Knowledge With Our Car Logo Quiz