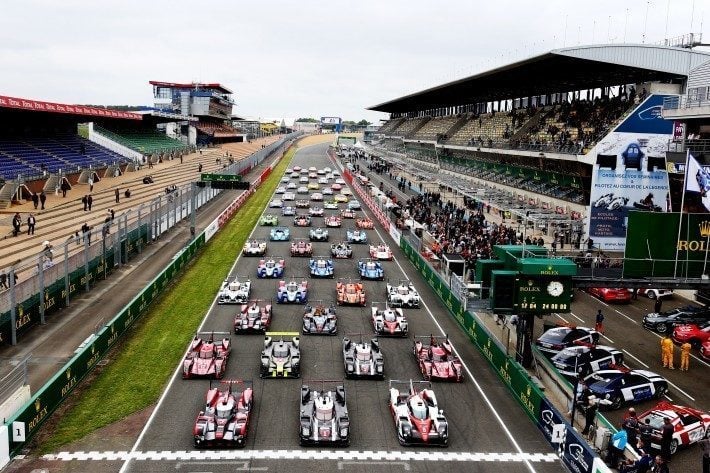 With Le Mans only just over a month away, the final 60-car entry list has been revealed.

It’s an unusual-looking field for 2017 as, for the first time in 18 years, there is no Audi presence in the top category. Indeed the entire LMP1 class is looking a little sparse with just six entries in total.

Porsche will look to secure its third straight outright win, with defending champion Neel Jani joined by 2015 winner Nick Tandy and displaced Audi driver Andre Lotterer in the lead 919 Hybrid. Its second car will be driven by New Zealand duo Earl Bamber and Brendon Hartley, along with Timo Bernhard.

After astonishing last-lap heartbreak last year, Toyota is coming back with reinforcements by way of an extra car. Wearing numbers 7, 8 and 9, Toyota will look to become only the second Japanese manufacturer to win the race with its new TS050. The number 8 car retains the same all-F1 alumni line up from last year, when it broke down on the last lap, with Sebastien Buemi, Anthony Davidson and Kazuki Nakajima driving.

LMP2 is, as usual, the most represented class. 25 cars in total will duke it out for the win, and the #36 Signatech-Alpine returns to defend its crown.

The remaining 29 cars make up the GTE Pro and GTE Am categories. Ford returns with a four car line-up to defend the title it controversially won in 2016, retaining the winning roster of Bourdais, Joey Hand and Dirk Müller. Bill Sweedler and Townsend Bell will return with an updated Scuderia Corsa Ferrari 488, along with Cooper MacNeil who couldn’t participate last year through illness, to defend GTE Am.

So far 179 drivers have been finalized, with 34 each from the United Kingdom and France, representing 31 different nations in total. The USA has entered 12 of the 60 cars, with 16 team nationalities listed.

Notably though, 2017 is the first year since 2010 to not have a single GT Academy driver on the grid. You can read the full entry list here.

2017 Le Mans 24 HoursFordPorscheToyota
2715 Comments Discuss this post in our forums...
Test Your Badge Knowledge With Our Car Logo Quiz