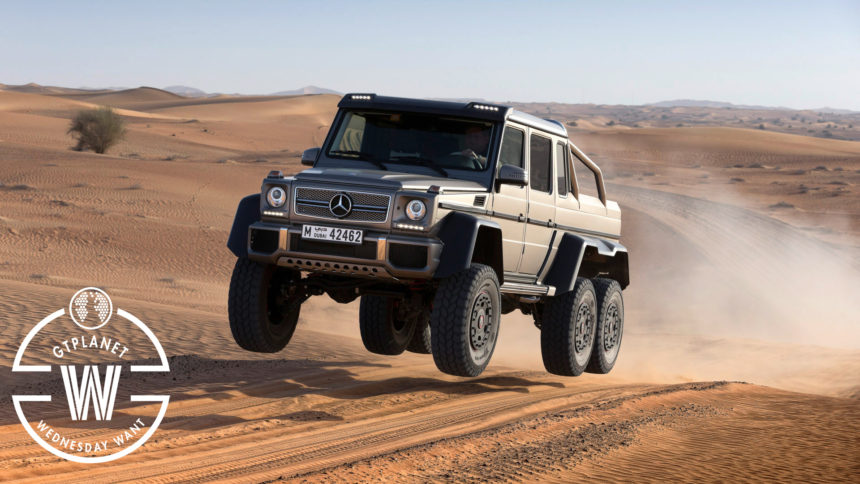 Earlier this week, we reviewed the Mercedes-Benz G-Class. It’s safe to say that we weren’t hugely impressed — the road manners leave a lot to be desired — but that has to be tempered by the fact that it’s not really a traditional road car.

You can think of the G-Class as the German Humvee. It’s a body-on-frame offroader that Mercedes specifically developed as a military vehicle. The G-Class — sometimes better known as the Geländewagen, or G-Wagen — isn’t actually built by Mercedes. It’s assembled in Austria by Magna Steyr, the modern name for Steyr-Puch who developed the Pinzgauer. This is a serious piece of off-road kit, just with a premium brand badge. And price.

Although the G-Class has gone through two generations, it’s basically been the same car underneath since 1979. There hasn’t really been any reason to change it because it is so good at its primary purpose. Sure, Mercedes has upgraded the tech and materials, but a G-Class in 2017 isn’t markedly different from a G-Wagen in 1979.

In essence that the reason why it still drives like a two-ton military offroader from the 1970s. That’s part of the charm — and the G-Class has its fans — but also why it’s just too dedicated to a single purpose for most ordinary folk.

But, just like the Humvee, it attracts a certain other crowd too. Arnold Schwarzenegger has a G-Class. So does Sylvester Stallone. Apparently they’re in high regard among the Kardashians too, and many a Premier League footballer has had a G-Class in their fleet. These are people who don’t care how it drives, but how expensive it is and how many paparazzi you can mow down at once in it. It’s a vehicle more in lifestyle pages than it is in motoring columns.

Along with being fabulously expensive, it helps that the G-Class is exceptionally plush by 4×4 standards. But for some of our celebrity magpies, even the excess of a £140,000, 20mpg office block isn’t quite enough. Luckily, Mercedes has an answer for that too. Enter the AMG 6×6. 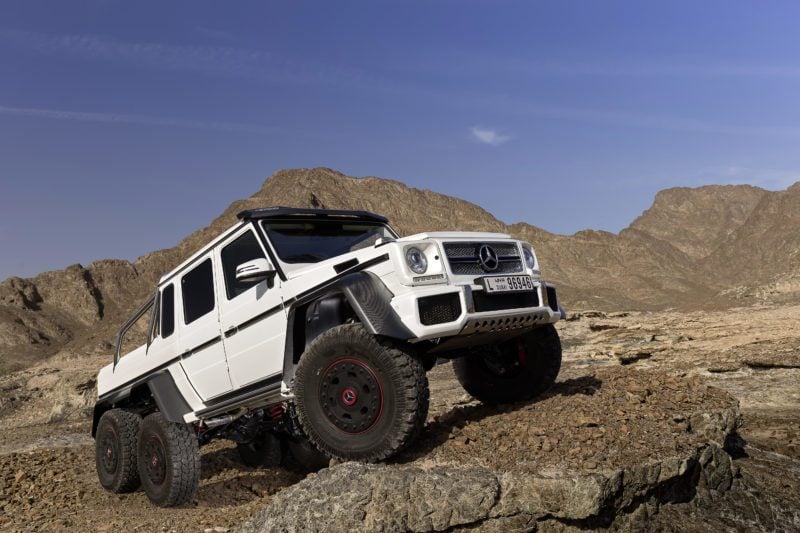 It’s a contender for one of the most ludicrous road cars ever conceived. This six-wheel drive monster packs an incredible selection of numbers all into the one car.

For a start, it still has the AMG 5.5-liter V8, good for 536hp. This drives all six wheels through a seven-speed auto. However the extra weight of the 6×6 is a little harder to push around — it tips the scales at over eight thousand pounds. Fuel economy? That’s under 15mpg Imperial, or around 12mpg US. That would mean empty tanks in 300 miles if it was a regular G-Class, but the 6×6 has a second tank that almost doubles the range.

Mercedes hasn’t published any performance figures for it, but a 0-60mph time under seven seconds is possible. That’s nearly three-and-three-quarter tons outdragging most hot hatchbacks… Up to 100mph at least — the massive tires on the 6×6 mean that it has to take a protective attitude and Mercedes limits the top speed.

Those vast tires — on 37-inch rims — are part of a raft of changes that make the 6×6 even better off road. Along with six-wheel drive, the enhanced G features portal hubs and three independent axles. The traditional three locking differentials are now five. Ground clearance is over a foot and a half better than its ordinary brethren. There’s also a tire pressure control system that can adjust pressures from 0.5 bar — for use on sand — up to road ratings of around 1.8 bar in just 20 seconds.

It can wade through over three feet of water. It can approach and depart slopes at greater than 1-in-1. It’s over a foot higher, a foot wider and four feet longer than a regular G63 AMG. You can fit an entire Ford Fiesta inside its wheelbase. Everything about the 6×6 takes what you know about the G-Class to the extreme.

But then despite all the potential, at least you’ll know that the furthest it had got from a road would be Floyd Mayweather’s driveway.

Car Culture 8 Apr 1 by Andrew Evans
File this one under “this is obviously an April Fool’s joke” if you like, but it isn’t. Meet the 42-foot (13-meter) long Learmousine, possibly the most inexplicable car we’ve ever…

Car Culture 39 Mar 31 by Andrew Evans
A little while ago, we wondered what the greatest ever movie car was. It came off the back of an odd poll in a press release from Hyundai and we…