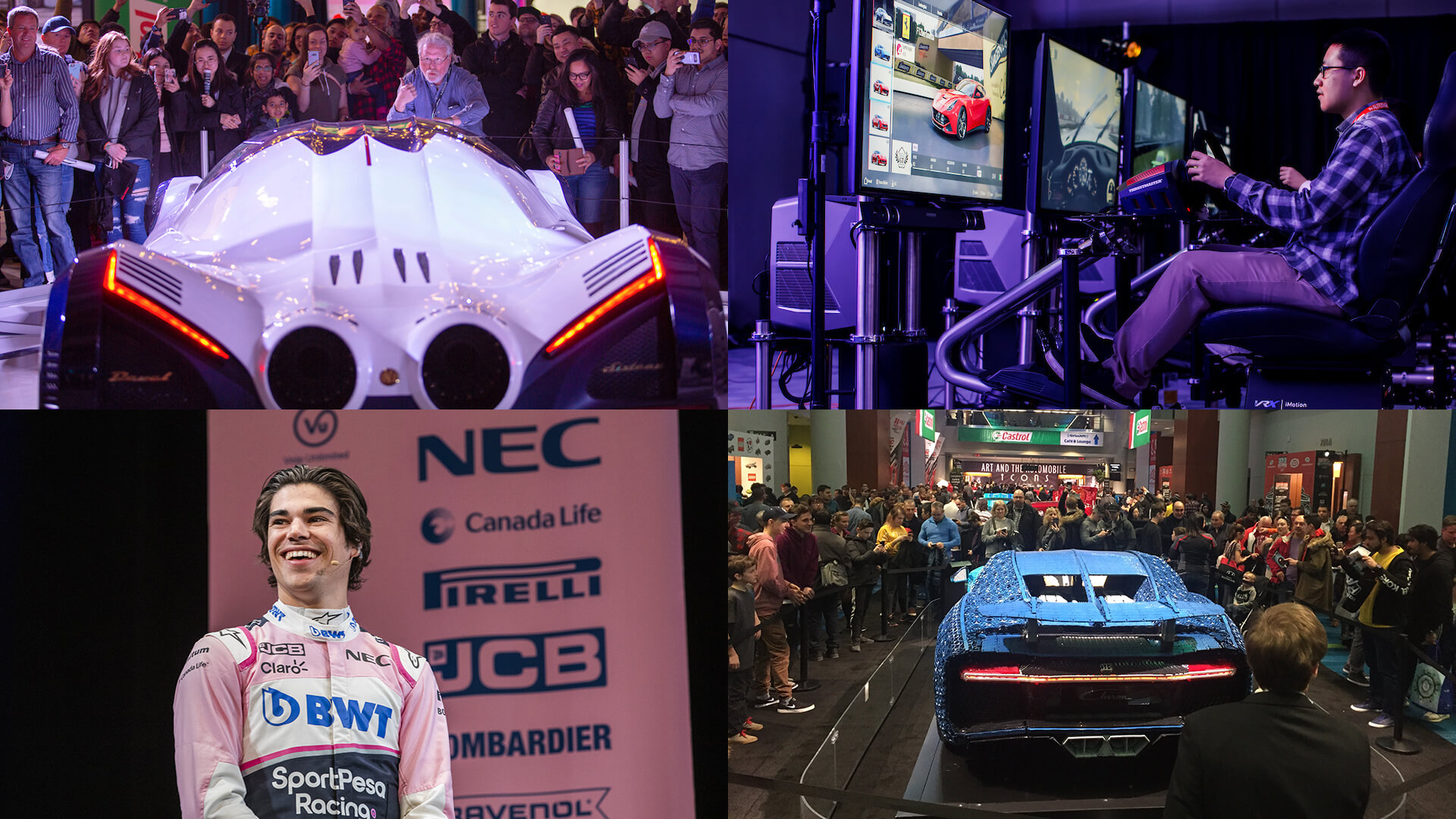 It’s the middle of February in Toronto — not exactly the vision of paradise. For Canuck car enthusiasts there is a bright spot however: the Canadian International AutoShow is currently on-going in the heart of Toronto.

We’ve scoured the floors of both North and South Metro Convention Centres over the last few days. With hundreds of cars on show, and a variety of unique activations from manufacturers and other companies, here are the highlights of the 46th iteration of the event.

The McLaren Senna, Devel Sixteen and more at Auto Exotica

The Auto Exotica section is, without fail, one of the most-trafficked parts of CIAS each year. This year will be no exception, with over two dozen fine automobiles combining for over $30 million of drool-worthy shapes.

Toronto pulled a bit of a coup here, with the first North American showing of the Devel Sixteen. Nevermind that the 5,007hp claim still does not gel with the styling of the car itself — there’s simply no way a 12.3-liter, quad-turbo V16 producing over three times the power of a Chiron will breathe well enough under the current bodywork, which is why the prototype runs a Chevy V8. Look past the visible build-quality issues the sole running example has.

None of that matters: what matters is that the Sixteen, with its jet turbine-sized exhaust ports is exactly what you’d get if you asked the average kid to draw their dream car. The Sixteen will be a huge draw for kids and the Instagram generation, and no matter what eventually happens with Devel’s planned seven-cars-per-year production of it, just seeing it is a very rare thing indeed.

It almost makes the Canadian debut of the McLaren Senna seem a bit quaint. Almost. But the bare carbon fiber beauty Pfaff McLaren has brought to the show is a stunner, with just the right amount of gold highlights to really set it off. At 789hp the Senna produces only a fraction of the Sixteen’s targeted output, but it pairs that to levels of downforce that exceed most race cars. It’s easy to get lost in all of the obsessive detailing that McLaren has imbued the Senna with for the singular purpose of outright track dominance — and we recommend doing just that.

That’s not to say the rest of the room is lacking. The rest of the modern McLaren lineup flanks the Senna, including the recently-revealed 720S Spider. Across the aisle sits a very purple Lamborghini Aventador SVJ, sandwiched between its Urus sibling and the imposing Rolls-Royce Cullinan. Elsewhere there’s a seven-strong lineup of ’90s and ’00s supercars, from Jaguar’s XJ220 right through to the glass-shattering Lexus LFA. 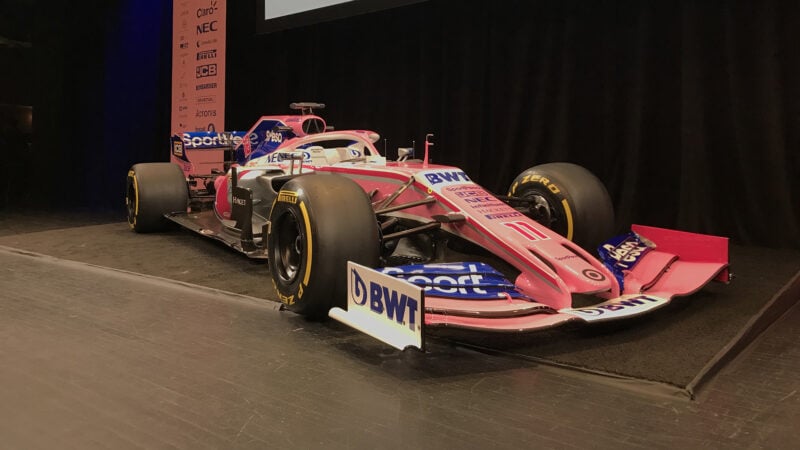 The Auto Exotica exhibit plays host to another car worthy of its own mention: Racing Point’s 2019 F1 contender. It’s not this year’s complete car, but it is a showcase of the updated livery, with the renamed outfit continuing with the pink theme sponsor BWT brought to the table two years ago.

New title sponsor SportPesa provides blue contrast near the rear of the car. Altogether, there will be little mistaking the Racing Point F1 team with anything else on the grid when the season gets underway next month.

After a tumultuous 2018, Canadian Lawrence Stroll and a consortium of backers swooped in to save Force India. His son Lance unsurprisingly moved to the team for this season, pairing with Sergio Perez, who will be contending his sixth season with the team. It’s a strong signal of intent launching the car at CIAS: it’s the first North American launch of any of the teams, and Racing Point is the only squad with two North American drivers. There was a strong response from the gathered crowd on Wednesday morning during the initial reveal, and Racing Point is hoping to get F1 fans on this side of the Atlantic more invested in the (relative) hometown heroes. 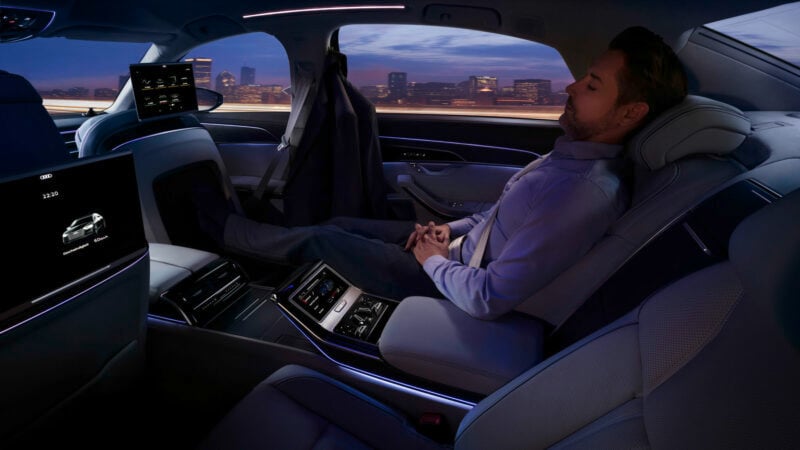 The Audi A8 Rear Seats (No, Seriously)

CIAS is not kind on feet. It’s not the organizer’s fault: it’s simple math, that this many cars and exhibitors need this many square feet. But between the shuffling up and down escalators and contesting the crowds, the AutoShow can wear you down over the course of a day.

We discovered the secret elixir to make it all so much easier though. While at the Audi stand, we popped into the new Audi A8 to live out our German executive dreams. Not up front, either: the dream naturally involves our own personal Jeeves. (Hey, we’ve spent longer on this than we care to admit.)

The rear seat experience in the A8 is the clearest indicator of why the range-topper starts at a hair under six figures. Roll up the windows and the bustle of the floor almost completely disappears. Recline the seats to a near-horizontal position and marvel at how much legroom there still is. Then turn on the massage function complete with ventilated, in-seat air conditioning.

In only a few minutes we were refreshed and ready to tackle the rest of the show. Try it yourself! And if you’re reading this Audi Canada, thank you.

We would be remiss if we didn’t mention some of the digital fun within the MTCC buildings. Leading the charge is Pfaff and WorldGaming, teaming up once again this year for an esport competition worth thousands in prizes.

The online qualifiers for the final on Sunday have already taken place, but there are still spots open for the fastest person each day of the show. To qualify you’ll need to run a clean lap at one of a variety of car/track combos (they change every day), on full-motion VRX sleds running Forza Motorsport 7. We’ve tried these setups at a variety of events (first at Silverstone in 2017, and last year at Goodwood) and it adds a welcome new dimension to hotlapping.

The racing portion of the event will include $20K in prize money, plus the opportunity to join Pfaff at a Canadian Tire Motorsports Park driving event. That’s not all: there’s a further $5,000 in prizes for the creative fans out there. Design a livery in-game on the Porsche 911 GT3 RS, and the winner earns cash plus the honor of seeing their design applied to a real-life race car, right in the center of the room.

Last year’s event ran on GT Sport. According to Pfaff’s Laurance Yap, this year’s online submissions were almost double 2018’s, and the in-person aspect of the CIAS presence will undoubtedly complement those figures. Like we’ve said multiple times in the past 12 months — or at last year’s finals — racing esports just keep getting bigger and better. 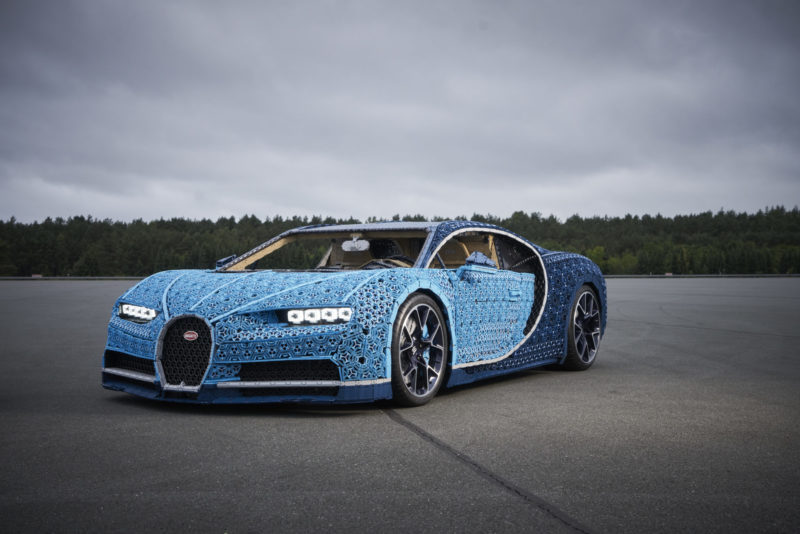 It’s safe to say most CIAS attendees love fast cars. It’s equally likely they also love LEGO — because who doesn’t? Easily one of the coolest features of the show combines both.

Yes, the full-scale LEGO Bugatti Chiron has made its North American debut right here in the heart of Toronto. Boasting a staggering 5.2hp and weighing in at a feather-weight 3300lb, it can’t quite challenge the real deal in performance terms. But we can’t think of anything else on the floor, in either building, that better conveys the sense of wonder and do-anything possibilities both cars and the Danish building blocks embody. Watching Rolls-Royce designer Alex Innes admiring all of the blocky Bugatti’s features at its unveiling was an absolute treat.

The Canadian International AutoShow is currently ongoing, from now until February 24. Check the official site for all details.