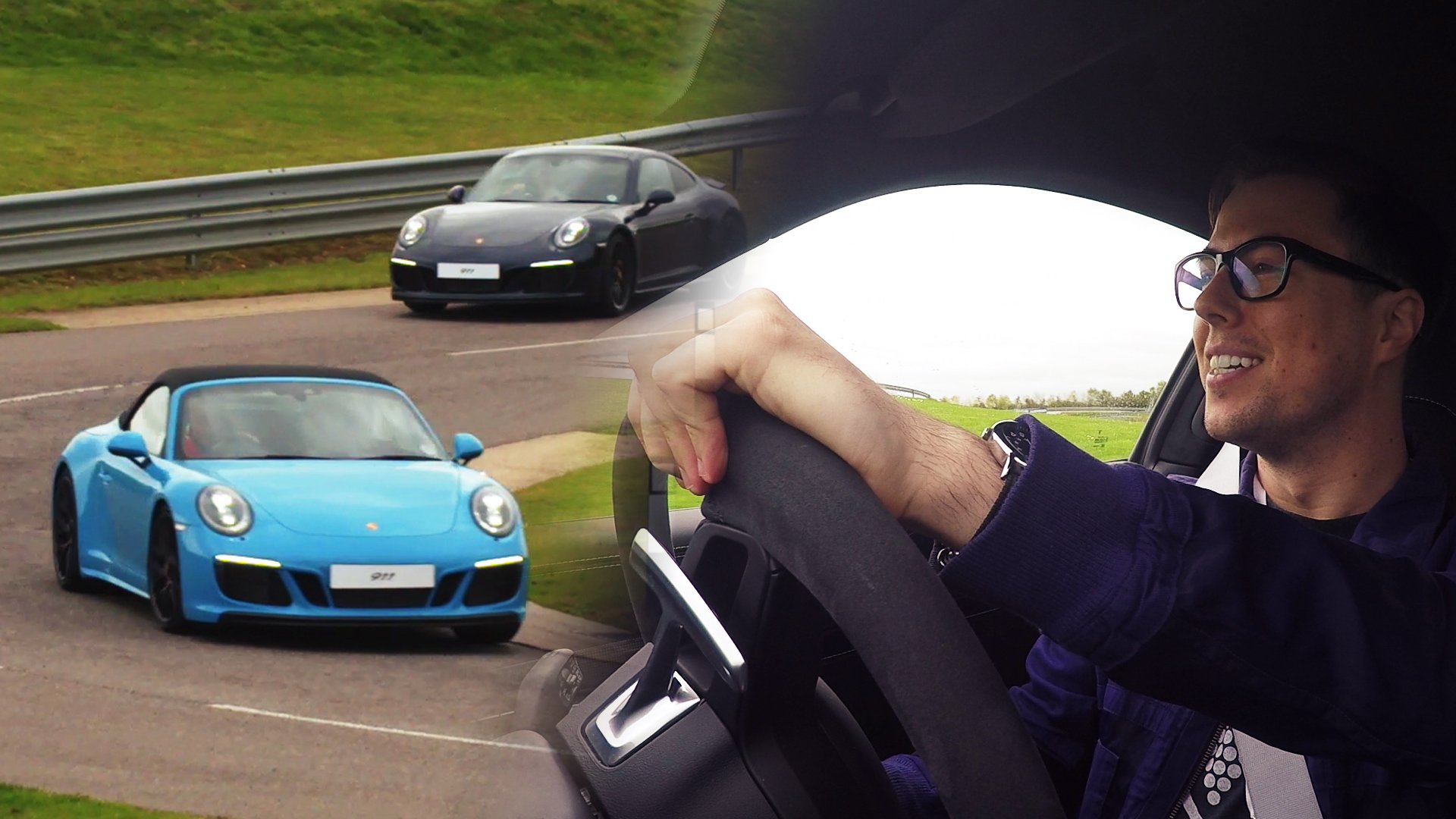 Back in October, Microsoft and Porsche invited us to Silverstone circuit in the UK to get some seat time with the modern sports car lineup, as well as the Xbox One X-powered version of Forza Motorsport 7. It was a lot of fun, not only to hear more on the franchise’s future from Dan Greenawalt, but also to experience these sports cars on the track.

We woke up bright and early the morning of to a trio of Cayennes waiting outside our hotel. Ambling in, we were quickly shuttled to the Home of British Motor Racing. Here we were split up into groups of five to take on a variety of tests and experiences throughout the day. The event organizers lined up our North American group — including Nick (AR12), Forest (TC9700) and Jack (JackUltraMotive) — to start the day in the 450hp 911 GTS.

With our crew split into camera and non-camera cars, I hopped in the GoPro-less Miami Blue cabrio you see above. It was a Carrera 4 GTS, and the all-paw status made our first test seem a little less daunting. The goal here was to take the car through a downhill slalom, with water sprinklers replacing the usual cones. According to my affable instructor, the water would mix with the epoxy driving surface to simulate ice driving.

It worked. The car felt up on its toes swerving between the walls of water, a far cry from its hunkered down stance on our warm up laps. More than that, the test drove home the point that managing weight balance in a 911 is still very much a thing. Yes, even with four wheel drive, as I found out when I got a little too judicious with the throttle. Whoops.

After that, we jumped into a gray GTS with Porsche Dynamic Chassis Control (PDCC). It felt even more sure-footed, making short work of the kilometer-long main handling loop. That may seem short, but the layout is great, feeling more like a fast country road than a race track.

My favorite section was definitely the downhill right-left in the first half of the lap. The line in just works in the 911, and it feeds into another great right-hander shortly after. Heading uphill, you turn in blind, crest at the apex, then head back downhill into a wriggle to the left. It was addictive, especially with that flat-six singing behind us. 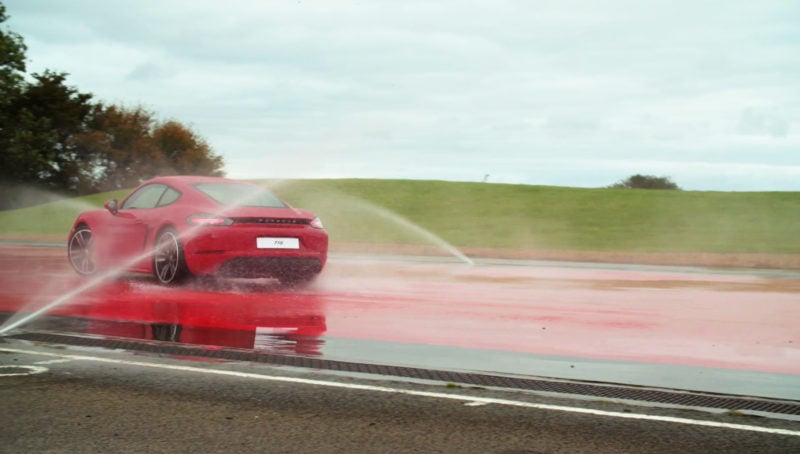 Our first hour already done, another track session was on the schedule. This time, it was in the 911’s little brothers, the 718 Cayman and Boxster. Even as the “junior” models of the lineup, these cars now pack 350hp in S form. I snagged a red Cayman and headed back out to get accustomed to it.

Immediately, the differences were apparent. I wouldn’t accuse the 911 of feeling heavy, but the 718 felt so much lighter and more agile. Thanks to that midship engine, I got the impression all of the car’s mass was contained within the wheelbase. It felt slightly slower than its big brother against the clock, but it was by no means tardy, even as we headed over to the kick-plate.

The kick-plate takes the epoxy-plus-water experience of the slalom and introduces forced opposite lock. As we’d drive over the plate, it would rapidly shift to the left or right, pitching the Cayman’s tail out. Neither my instructor or I knew which direction it would go, so I had to rely on quick reflexes. Which is why I spun the first two times.

On the third go, we disabled the driving aids. This actually seemed to help, as I kept it pointing the right direction at the target speed. On my last run, we bumped the initial speed up to the max (25mph) and banked another clean run. Success!

The other big contributor here was throttle control; keeping a steady throttle during the shift sideways was imperative. Any sudden increase (or decrease) would shift the car’s balance, and that could spell trouble out in the real world. As my instructor pointed out, the differences in speeds here were only around 10%, but that had a huge impact on the rest of the test. At highway speeds, a 10% change when you hit ice could cause even more issues.

After that, we had to swap out into a non-camera car. My instructor asked what I wanted to do next, and I deferred to his expertise. He suggested we go drifting, and I was obviously not going to argue.

Inside the handling circuit (which is inside Silverstone — trackception?) there’s a smaller, diamond-polished layout. Out there on the limestone, grip was significantly reduced. After a bit of coaching — including a two-lap run almost exclusively sideways — I was comfortably drifting the Cayman.

The highlight was actually managing to link three of the corners together in what felt like a smooth sequence. That low-grip surface made the experience possible at sub-illegal speeds, and it was amazing how natural it felt; a Cayman is hardly what you picture when you think “drift car”. I’m still sad we didn’t do that part of the day with a camera car! 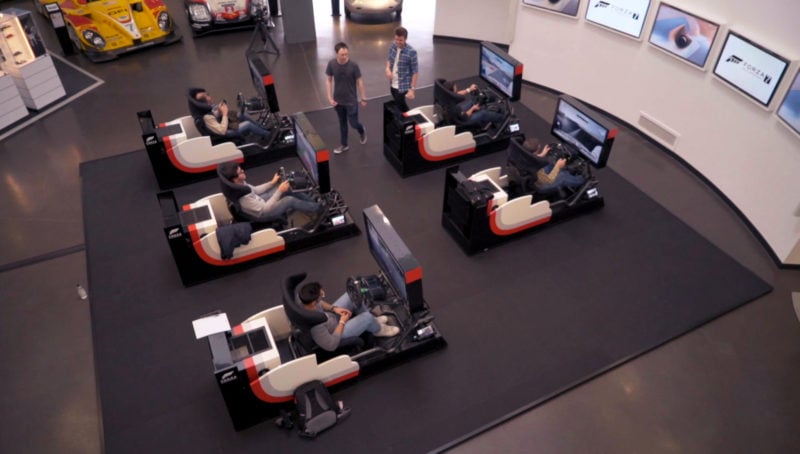 With the adrenaline high of the track times behind us, the rest of our time blocks all covered various sessions in the building. We got to chat with Dan Greenawalt about the future of the franchise, which covered the gradual roll-out of Forzathon, Leagues, and everything else that’s popped up since the initial release of Forza 7.

We also found out we were competing. Not only were we scored on our in-car performances, but we’d be fighting it out in some time trial events in-game. We weren’t told the prize, but we’re a bunch of gamers and car fans — we didn’t need to be told what’s on the line to get competitive.

One of the challenges was a fastest lap trial with the 919 Hybrid around Silverstone. I’m proud to say I represented GTPlanet well, scoring the top time not just in our group, but of the day.

The other scored challenge involved clambering into one of the motion rigs for a run around Dubai in the 911 GT2 RS (which was sitting in the lobby just begging to be ogled). I set a decent time here, but unfamiliarity with the track meant I couldn’t top the boards. See, I even got racing driver excuse practice!

At the end of the day, it was announced that there was a tie in our group. The two Canadians — Nick and I — would run a final 919 race to determine who got to be a passenger in a hot lap session in the 911 GT3 RS. I won, but we were just happy that team Canada did so well.

The RS was just incredible. My driver wasted no time going all-out, providing an assault on the senses. The speed was mega, but it was the brakes that impressed me most. And of course, that sound. Yes please.

Obviously familiar with the track, the driver would place the car within inches of the bollards dotting the apexes, a feat capped off with one glorious trip through that blind right-hander at the edge of adhesion. The GT3 was just sliding, but it still was transferring that into forward momentum.

It’s such a shame I couldn’t hold a GoPro straight. Oh well — thanks for lending it my way, Steve (Super GT)! 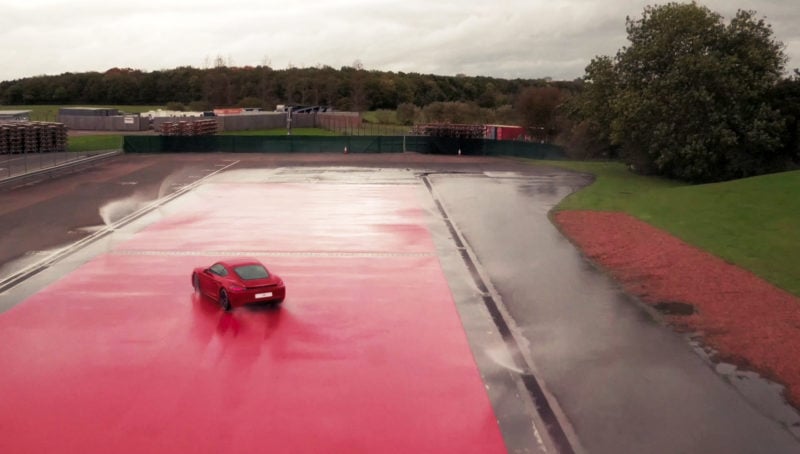 What Did I Learn?

It was a whirlwind day, and before I knew it, it was all over. Coming at it from a sim racer angle, what did the experience provide?

Well, you’re probably sick of hearing it, but first and foremost: no game is a replacement for the real thing. I knew this going in, but driving Porsches on a race track really drove that point home. The Alcantara-wrapped wheel may have felt like the one hooked up to my rig, but the feedback is on another level. That seat-of-the-pants feeling is unmistakeable, too.

One thing I think most driving sims struggle to emulate is the sense of weight balance, specifically how inputs can affect it. The simulated ice driving was one thing, but even in the dry, sudden throttle changes altered the behavior of the cars. Both the 911 and Cayman tucked in smartly with a lift, seemingly more than their digital equivalents.

The drifting was an eye-opener: it shocked me how natural it felt. The hardest part was reminding myself to look out the side windows to see where I was heading. That was the key: it was a bit like riding a horse actually, in the sense that the car tends to go where you’re looking. You stop thinking about what your hands are doing, and just get down to the business of chucking the car around.

Holding the car sideways actually did feel a bit like it does in-game. Obviously the g-forces are absent, and we were travelling at far saner speeds, but that oddly calm sense of balance when you don’t over-correct? That was there.

Oh yeah, I also learned that no matter how quick and composed you feel, when you re-watch the footage, you’ll feel like you could’ve gone faster. I’m also now checking the used ads for Caymans a lot more since October…

Thank you to all of the people at Xbox (both US and UK), Microsoft, and Porsche for making it all happen! It was a fantastic experience, and I wouldn’t hesitate to recommend a PEC outing to auto enthusiast friends.