For Monday PC2 racing please click on the following link: 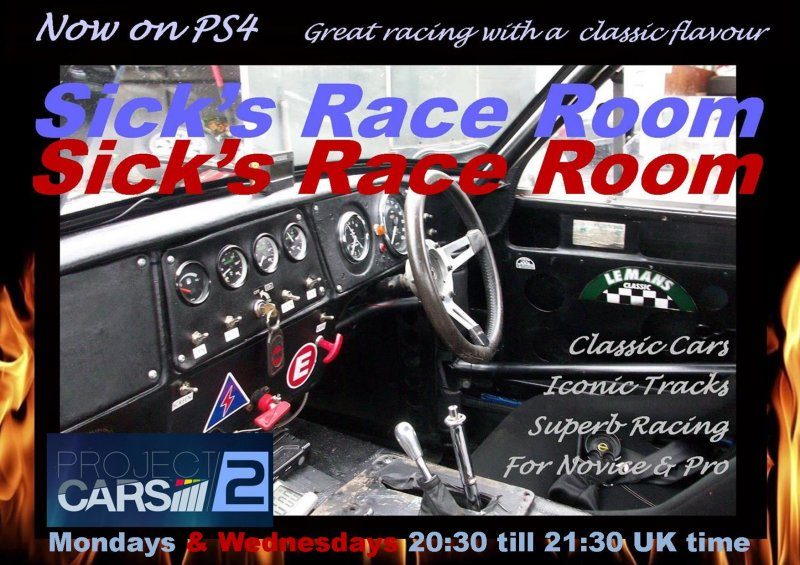 Conditions
Different weather conditions and time progression may be used from time to time, but will normally be announced in advance (refer to track list).

Pit Stops - All races (except specified exceptions) will feature one manual Pit Stop to be completed during a 10 minute pit window between 10 minutes to 20 minutes after race start. Failure to complete the pit stop will incur a one minute penalty. There will be no Pit Stop during races at circuits which do not have a Pit Lane (e.g. Lydden Hill). If a complete series does not feature Pit Stops, this will be specified.

NB Please do not reset to track - this is considered cheating, observe track limits, however if your car is on its side or roof or otherwise unable to move, reset to track can be used .

In Project cars 2 you cannot choose a race number like you can in GT6, but you can choose a livery (colour scheme) which is pre-fitted with a race number. select the car then scroll through until you find the one you want.

Note - The cars and race numbers to use are listed in post 1 on page 1 of this thread.

We will be following the Online Racing Rules (OLR) as published on GT Planet. Please read and comply with these - click on link below:

Key Things
This is a hobby and we do this for fun, including me!
If you make a mistake and gain an advantage - give the place back.
If you make a mistake and go off the track - be careful when you rejoin not to get in the way of oncoming cars (Note reset to track is not allowed and is considered cheating - if you are struggling to stay on track slow down to an appropriate pace).
If you get upset - don't retaliate.
If you get upset - quit the race and calm down.
If you need to complain about someone's driving wait until the next day then send a private message via GT Planet to Sick Cylinder - DO NOT complain about other drivers on this thread or any other public forum.
DO NOT send text messages during qualifying or the race - they are very distracting - wait until after the meeting.

Penalties
I like to keep things simple - if a penalty needs to be given a driver may have their result altered. If it was a serious offence they may be excluded from the results.
Serious and / or repeated offences may result in a temporary suspension or permanent ban.
Last edited: Sep 26, 2017 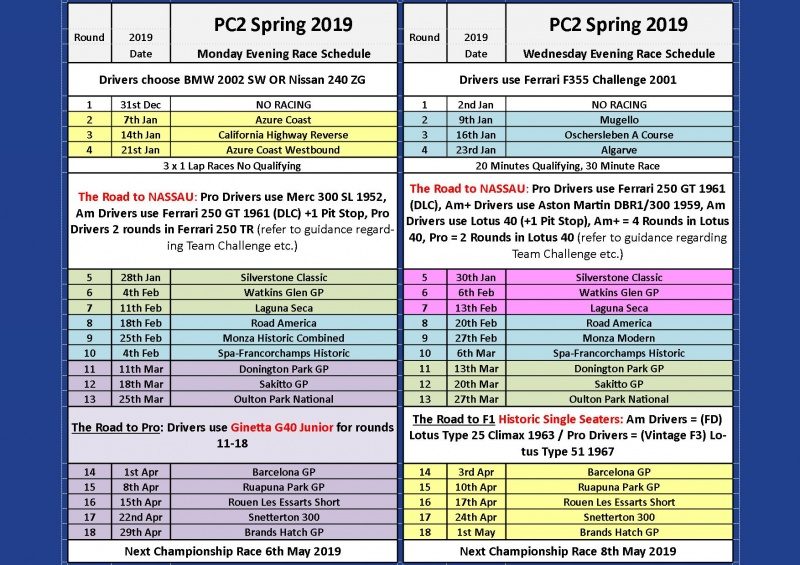 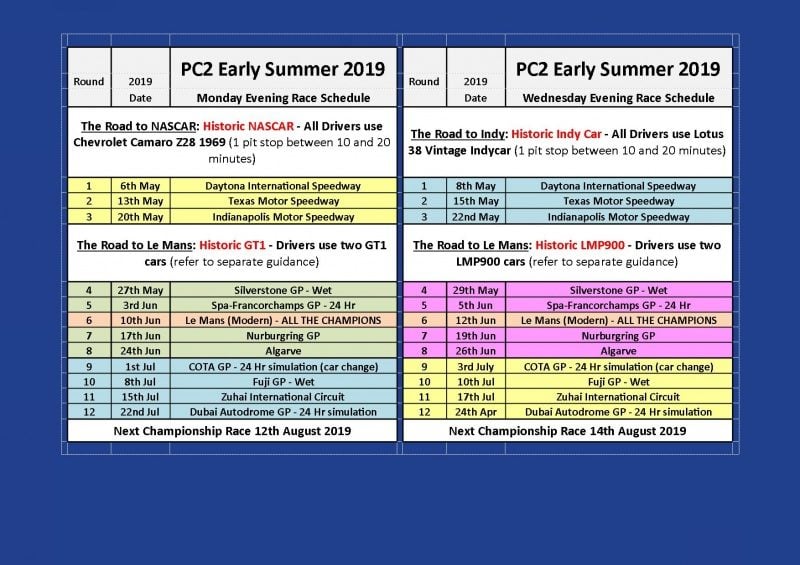 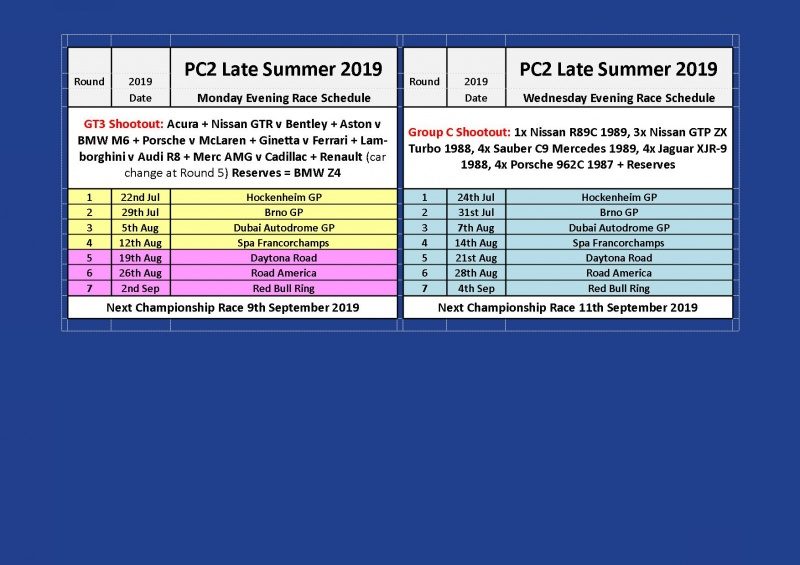 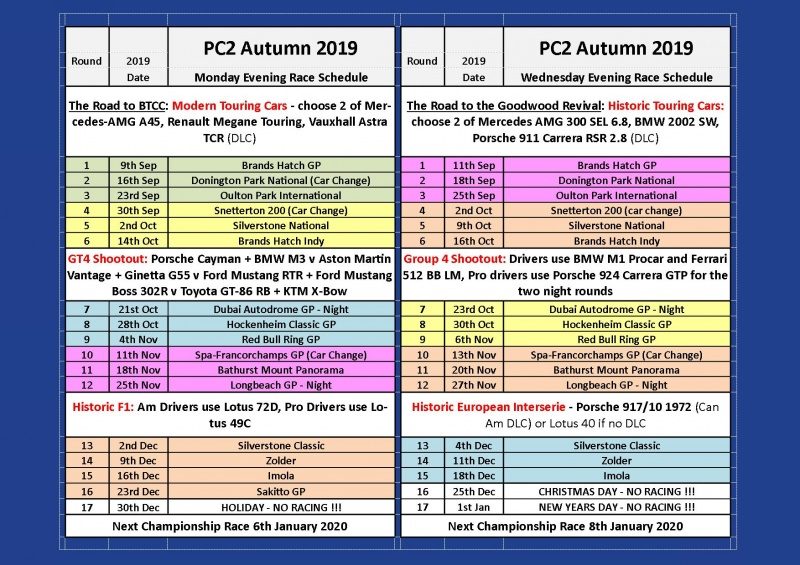 Note Programme may be subject to change
Last edited: Dec 30, 2018 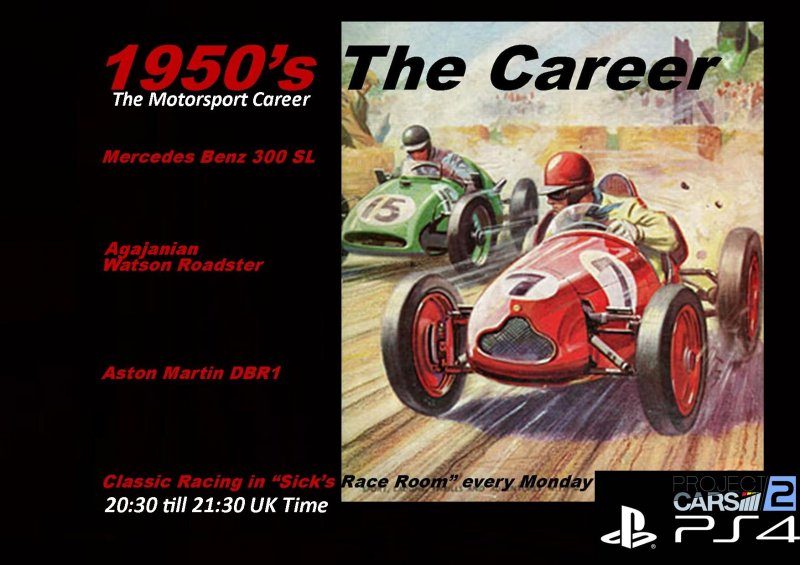 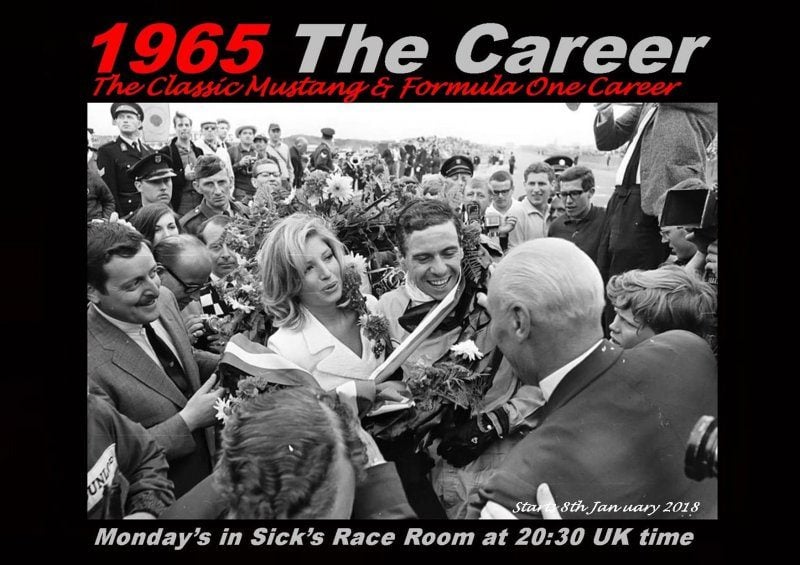 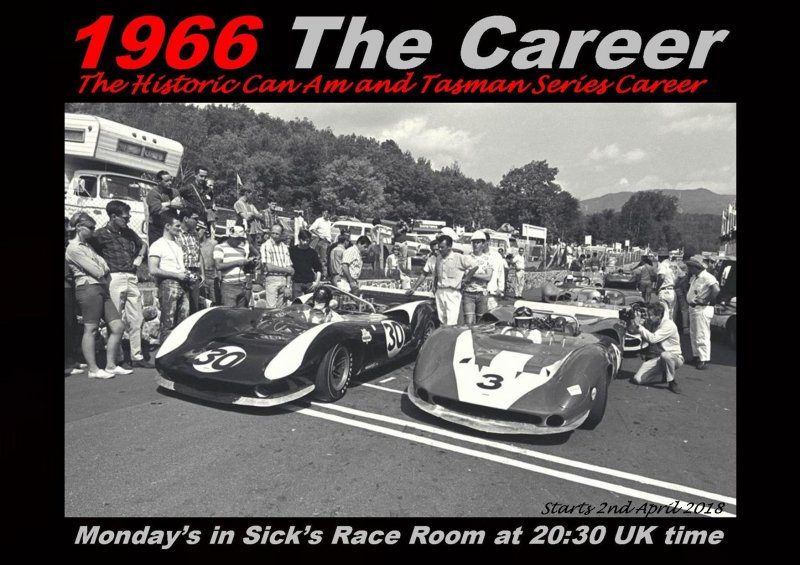 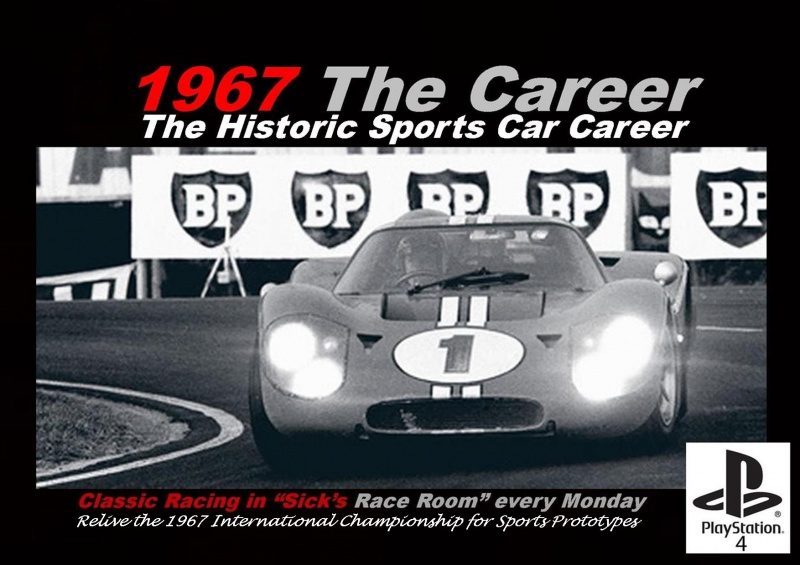 We can choose from the selection of cars?

Also could we have competetive racing liscense on? Could help for our safteylisense

Hi MrTree yes we will be driving a section of car in this series.

Sick try this go into audio PS4 move sound output up, I'll try myself later, sound is quite low.


Mr Tree
We can choose from the selection of cars?

Also could we have competetive racing liscense on? Could help for our safteylisense
Click to expand...

Hi Mr Tree - the list of liveries/ race numbers available for the first car (Merc 300 SL) is now up near the start of the thread. We drive the Merc for the first 5 rounds, then the Roadster for 3, then the final 4 rounds in the Aston Martin DBR1. The full track list will be up soon which will make this more clear.

Regarding the racing license - I haven't used this yet because I believe that SMS are about to make some changes to it as it is currently over penalising for disconnections particularly disconnections by the series host. We may use it in the future.


John Wells
Hi MrTree yes we will be driving a section of car in this series.

Sick try this go into audio PS4 move sound output up, I'll try myself later, sound is quite low.
Click to expand...

Thanks John - I will try that later.


Information for all Drivers - the track list is now up near the start of the thread.

These cars are already challenging to drive and some of the circuits are unfamiliar so I have decided to leave damage off for this series - with it left on I think you would find yourself trapped halfway round Historic Spa, which is no fun. We will also be filling the grid with AI, but they have not been patched yet and I don't want people to have their races ruined by the AI. will review the settings during the season and may use damage at some familiar tracks, but not at Historic Spa or Knockhill.
Last edited: Sep 29, 2017

Thanks for your car choice Andreas - see you on track on Monday!

I would like to join you on Monday. It would be my first race on PCARS2

I'll be back what livery I use.

@richroo - I've given you number 18 green. Anyone else who is planning to race tonight please choose from one of the following liveries/numbers and let me know:

It's a small track (1.3 miles) and we will have at least 6 (maybe more) racers and there is likely to be a big difference in lap time between fastest and slowest so I have decided to exclude AI from this round. All faster drivers please take care when lapping as it is a narrow and tight track - you may have to be patient and wait a second. Slower drivers (including myself) please watch out for fast guys lapping and give them room when it is safe.

Good luck everyone! If you are thinking of joining this series - go ahead it should be great fun! If you are not free for Round 1 you can still join at Round 2!
M

Livery will be posted @around 18h I'll be present!

I'm in the room but it says Waiting...

The start of the race seemed a bit, lagging, people were on the grass.
Was this car hard to drive, in real life, tyres seem too made of glass. I think those that just join, will have found hard race.

Good race though, more practice for next week.

Good race , well done simba
After the funky start i lost it first corner and then struggled to get back to track putting me to the back .
Now having to push more i made my way back up , flaco i know it was for position but holding me up was not what i was expecting so apologies for the nudge sending you off.
I had some good laps but kept getting a penalty warning on others so was slowing to clear it, by this time i had overheated the tyres and started losing the car costing me time and places .
With sick and d fighting for the same position i had to keep it on the track to keep ahead ..
Ps. Good couple of laps with simba was fun

Results table now up near the start of the thread - Post 6.

A very strange start with a collision between the cars before they were under manual control so I lost my fifth spot and dropped to 9th. It could be a peculiarity relating to that track with cars rolling from before the hairpin. A strange start, but a good race - race report to follow.

Has anyone worked out how to use the camera in PC2 yet? It would be nice to get a few photos up after each race.

Thanks U - I will correct the table when it gets updated for the next round (if I forget please feel free to remind me!).

@John Wells thanks for posting up some photos - I've managed to take a few in PC2, but haven't worked out how to get them out of the game and onto a memory stick so I can post them via the laptop.

Classic Corner
A new feature where I will post a picture or two from the relevant decade of a car or cars seen at one of this years events - races or car shows. This week - the incredible Mercedes-Benz 300 SLR. This car was made a couple of years after the 300 SL and instead of a straight six out of a Mercedes saloon it used the 2.5 litre straight 8 from the then current F1 car, but enlarged to 3 litres. The motor was incredibly advanced for the time, featuring mechanical fuel injection, desmodromic valves and a central power take off to enable a lightweight crankshaft design. The car featured inboard drum brakes plus a large air brake which was deployed at high speed. In the hands of Stirling Moss the 300 SLR won the Mille Miglia in record time and would likely have won the Le Mans 24 hours in 1955, but the team withdrew from the race following a tragic accident. I was lucky enough to snap this car at the London Classic Car Show. If I was in charge of the PC2 DLC this 180mph beauty would be added in Coupe and Roadster form! 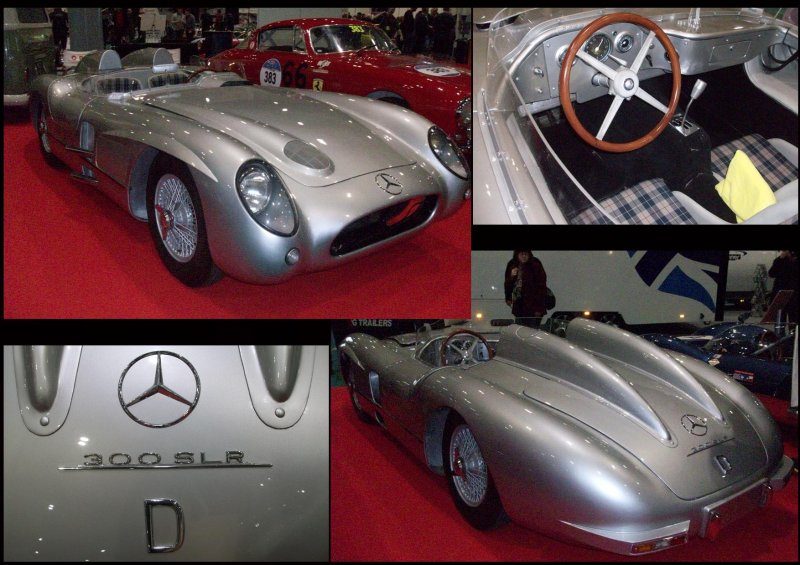 Round 2 Preview - Rouen Les Essarts (France)
The perfect track for classic cars with its olde worlde charm and great sense of speed from trackside objects and fencing. The version in the game looks slightly flat does not quite capture the hilly nature of the real life version. It was used several times for the French Grand Prix, but was eventually considered too dangerous and was closed for racing in 1993. Sadly a number of great drivers lost their lives at Rouen including Jo Schlesser in 1968 and Gerry Birrell in 1973.

Below - a brief history of the circuit

If you have 50 minutes spare, savour this rare, big budget gem - an American made film of the 1961 Tour de France featuring incredible (for the time) helicopter camera footage of Ferrari 250 GT's and Porsche 356's and including an interview with Olivier Gendebien. there is plenty of footage of Rouen Les Essarts, Le Mans, Clermont Ferrand (Charade) and other great French tracks.

Important Notice for all drivers regarding Round 2
Note - damage and mechanical failures will be on and the track is quite narrow so please take extra care with overtaking.

Note - there will be a permanent, virtual yellow flag at the Hairpin - this means strictly no overtaking at the hairpin or the braking zone for the hairpin. This rule is necessary because the hairpin is tight and must be approached from the extreme left of the track in order to make the turn and not run off the track and up the bank.

Thanks Sick:tup: Whats the best way too drive this car?


The track reminds me of Olivers Mount Scarborough, though its a lot tighter.