PSN offapple
My apologies for not noticing or replying sooner. Your entries will be added, however #18 is already taken by someone (Mountain King Challenge only). I apologize if it's inconvenient, but I'll have to ask you to change your racing number to one that isn't taken on the entry list already
Click to expand...

Is it being changed for the Desert Duel too, or is it still going to be #18 for that event while being #13 for the Mountain King?

Edit: Multi quote decided to not work for some reason.


Is it being changed for the Desert Duel too, or is it still going to be #18 for that event while being #13 for the Mountain King?

Edit: Multi quote decided to not work for some reason.
Click to expand...


Hello, yeah i did read that in the rules about liveries, can i get the correct livery on discover? My current livery is the one in my profile pic that i made, the classic "Gulf" livery , i'm a bit unsure about the zurich number plates, do they apply to all races? and if so how can i add them to a livery i didn't make? or are those edited / made by yourself ? . Also is my "King of the mountain" entry OK? i'm assuming i'll be a reserve but was unsure what the reserve list limit was.

life has been frickin me over lately, pull me out of the entry list for the mountain king challenge, forced to go somewhere at the time of the race

This will be a reserve, as you may know already.

It's time to find out who will be crowned King of the Mountain! Please confirm presence/absence in advance. Hope to see you in just under 2 hours!

Oh I'll be there alright along with Britannia Racings new livery

i’ll be there. didnt have time to figure out which gr.4 car, so i’ll just stick with the audi I use in another gr.4 series. 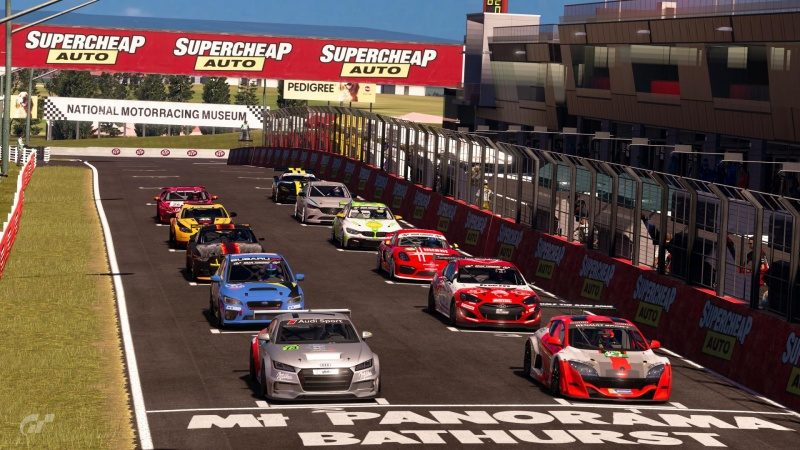 Thanks to everyone who showed up for the Mountain King Challenge! We saw some great racing today! 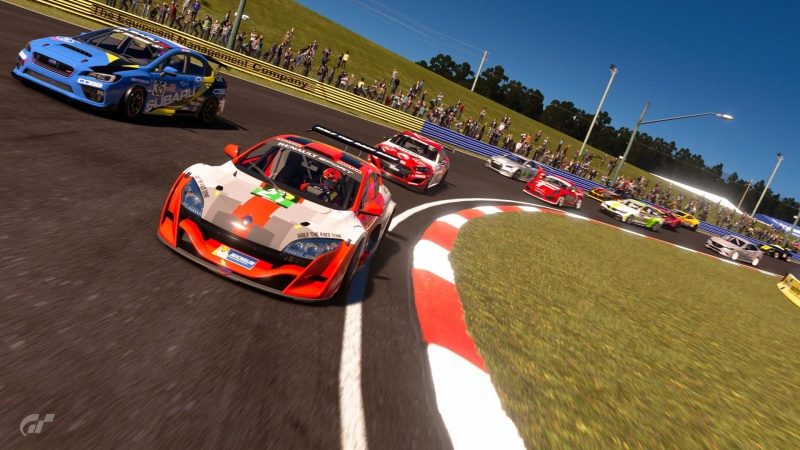 Next up is the Desert Duel Challenge in 2 weeks. Hope to see you there!

frick, i wish i coulda made it to this 1

Subaru-Cobb Racing: What on Earth Happened?

Chapter One: The Bathurst Time Attack
“Oh chute, that’s the wall! Sorry guys!”
​
It’s been night in Australia for a while now, and a lone car thunders around one of the Seven Wonders of Racing. It’s a purple Subaru, and it’s driver is the American we all have grown to love (or maybe hate), GRM Bandit. Buy what is he doing on track? And why is he driving at night? Well, that’s a good question. There is an answer though, and it may shock you.

“I just wanted some night shots of the car. I don’t see a lot of people racing at night, especially not around normal circuits. So I took the car out and did a few laps. I probably upset some of the other teams in the garage, but the shots were awesome.” 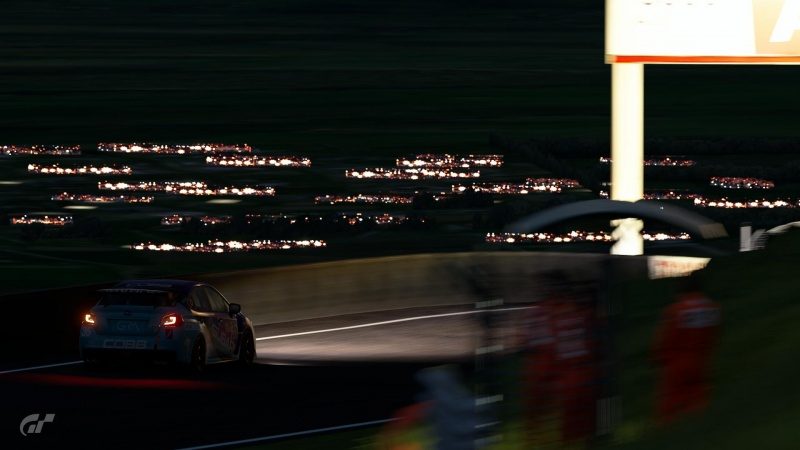 #59 Subaru-Cobb Racing WRX STi of GRM Bandit thundering along the top of Mount Panorama.
​
But this was just the beginning of the Cobb Racing Team’s woes at the mountain. Early into the night, the #59 had lost a wheel in the brutal downhill of Mount Panorama. This caused a minor accident, but destroyed the front end of the #59 car, damaged the intercooler, and bent the chassis. Luckily for Bandit, he didn’t make the same mistake as NES S4 Round 10 Race 2 and actually brought a spare car. This one however, hadn’t had the proper wrap on. From this test session on, Bandit would be returning to the blue #35 WRX STi.

A few days later, Bandit was able to jump into another time attack session. Instead of ending in tears, the American was able to set a blistering lap time of 2:11.868. After coming into the pits, he gave a statement to a film member.

“That was fun! The car is scaring the living **** outta me coming into T4, and down the mountain, but still mighty fun.”


Chapter Two: Qualifying
“Chute, I gotta go with group one... Oi! You! Gloves, helmet, I gotta qualify!”
​
Qualifying is never the strong suit of a sprint racer. At least that’s what GRM Bandit would have said racing the #3 Corvette Racing C7.R in Endureon IMSA. The atmosphere was tense in the Subaru-Cobb Racing garage. Teammate Mika was called to Japan to race in the ISGT (congrats on your P1 bud!), and Bandit lost his Ralliart-Cobb Racing driver because of a timing conflict (this is only the third time the American had done this too). Exiting the pits, GRM Bandit was last, and he expected a P5 at best, WaikeCU, CrazyJohn_25, and JoeOfTheFire posting impressive laptimes in FP3.

“I had been posting 2:13’s all morning. Needless to say I thought I was going to be waaay down the order. But I was pleasantly surprised when I clocked in with a 2:12.5 or whatever. That set me up quite well with a P4 start.”

But the race weekend only got better for the lone Subaru. 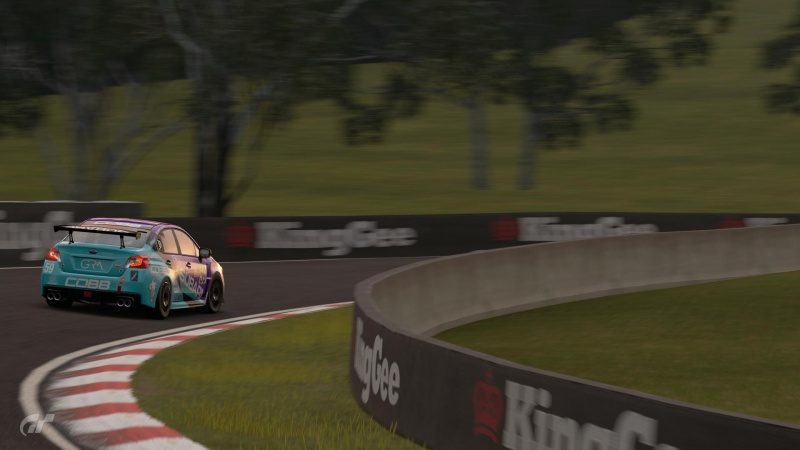 Chapter Three: The Curse of the Mountain
“Fuh, that’s the wall. Sorry guys, I’ll try to limp it home.”
​
It’s definitely not the media’s place to spoil anything, but Bandit had a terrible race. He started in P4, jumped up to P2, and dropped back from then on. His pace issue was only compounded by heavy front tire wear and damage obtained from the track walls. After the race, Bandit stormed off into his trailer and refused to give an interview for the media.

All in all, was Subaru-Cobb Racing a failure? We don’t really know. Well just have to wait and see for the next GR.4 event (not Desert Duel, GRM Bandit has already signed with Oreca Team Viper). Until next time, I’m not GRM Bandit and this hasn’t been the NES Articles, but rather this has been A Ghost in the Garage, and I’m going back to the nether. Good night everybody!
Last edited: May 10, 2019

I’ve edited my Tyres for the last race to Dunlop

There is now 1 extra guarenteed space for the Desert Duel Challenge after Pesca has left the NES.

Also, we're currently not seeing too many entries for The NES Classic compared to other events. In this regard, I'm considering allowing ANY classic Gran Turismo liveries that were featured in GT6 (Oreca Viper's, Phoenix R8's, Castrol Supra's etc) as a way of getting more entries*. The strong preference is still to have cars from NES Seasons 1 & 2 though, as it has been from the start.

The Desert Duel Challenge is this upcoming Sunday. Hope to see as many of you there as possible!

*Change not confirmed as happening.
Last edited: May 8, 2019

I dont think I can make the race this weekend, so go ahead and replace my entry too.

Radishnous, count me. I want to eat some dust!

Welcome to the NES, JimJam!

What time is it at?

D-Max
What time is it at?
Click to expand...

Mrs has just informed me of her plans today. Consequences of this is that I can’t race.

D-Max
Mrs has just informed me of her plans today. Consequences of this is that I can’t race.
Click to expand...

Aight JimJam. Thanks for letting me know.

It's Raceday!
We're just a couple of hours away from the Desert Duel! I hope to see as many of you there as possible. Please confirm presence/absence in advance!

To all other competitors: please note that i'll be driving cockpit view tonight, just for the fun/immersion of it. I'm not used to this but I will be driving with the radar up; I'm might be a little slow/blind (more than usual, anyway)

i woulda raced today but guess what calamity i've been dealing with these past few weeks. First of all final exams/other school stuff, Ps Plus is gone....again, my brother found out how to corrupt every single game on my ps4, and even more. Thats why i haven't been online in literally like 2 or 3 weeks. Pls pray for ya brother

F for my boi AC. In other news, imma start work on a new NES article not featuring myself or my team!

Count me in guys for the NES Classic. Should be able to make it!

I would like to drive the Porsche 911 RSR, can I drive for your former team Marlboro @Hasse R ?