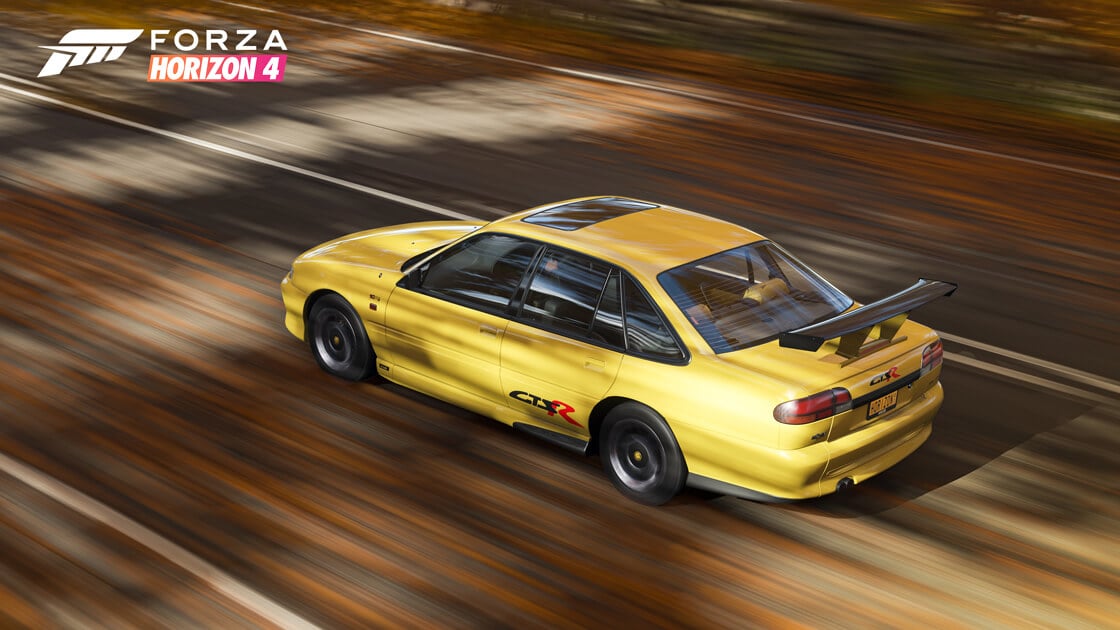 Crisp spring sunshine is making its presence known, with a new season underway in Forza Horizon 4. With the next update imminent, we’re now into the final stretch for Series 25.

The last Spring Playlist update comes with more prizes for 50% and 80% completion. With a wild Aussie sedan making its way to the festival this week, let’s dive further into this season’s content. 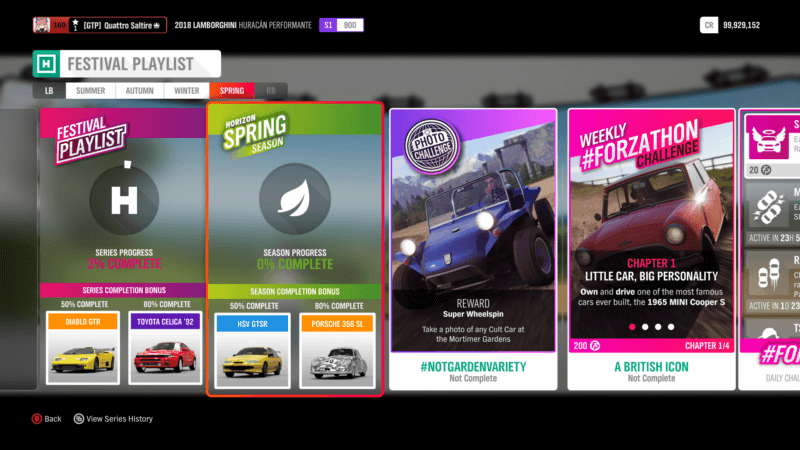 Taking a very noisy spotlight this week is the 1996 HSV GTS-R. This big sedan is one of the most exclusive Australian cars ever built.

With just 85 units in total, the GTS-R is considered a unicorn. Under the skin lies plenty of racing pedigree, including a 5.7-liter V8 that kicks out 310hp, and suspension tuned from the track. With carbon fiber body panels to keep the weight off, the handling should be a riot.

Coming in behind it is the 1951 Porsche 356 SL. This little machine was designed to take Porsche racing, and gave the Stuttgart brand its first class victory at Le Mans. The 1.1-liter flat-four may produce just 46hp, but a weight of just over 1,400lb means it will carve through corners with surprising speed.

Prizes for seasonal championships include the Volvo Iron Knight and an Alien Morph Suit for your avatar.

The highlight this week comes by way of the 1966 Porsche 906 Carrera 6. In the sports car era dominated by Ford vs Ferrari, the 906 is seen as the underdog. It might not have achieved legendary status, but the 906 still carries a successful racing portfolio.

A 210hp, 2.0-liter flat-six may not sound powerful, but the Porsche is more than capable of sticking with its famous rivals. If this sounds like your kind of thing, you’ll need to win the “Greatest Hits” championship to get your hands on it.

The last Photo Challenge of Series 25 will take you back in time to the era of cult heroes. “#NotGardenVariety” requires you to photograph any Cult Car at Mortimer Gardens.

25’s final Showcase Remix event is another returnee. “Commuter Blues” will pitch you against the Flying Scotsman steam train in a race to Edinburgh. Your weapon of choice is the 2015 Porsche Macan Turbo.

You can find the list of events and prizes below. 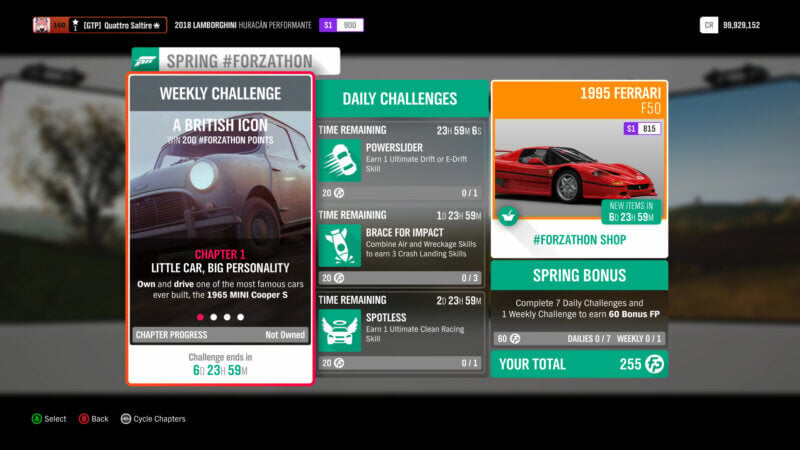 Forzathon goes small this week, but focuses on a British institution: the 1965 Mini Cooper S. Hop into this tiny legend to get going.

Finally, demonstrate the Mini’s ultimate agility by earning a total of 75,000 Skill Score to finish up this week. 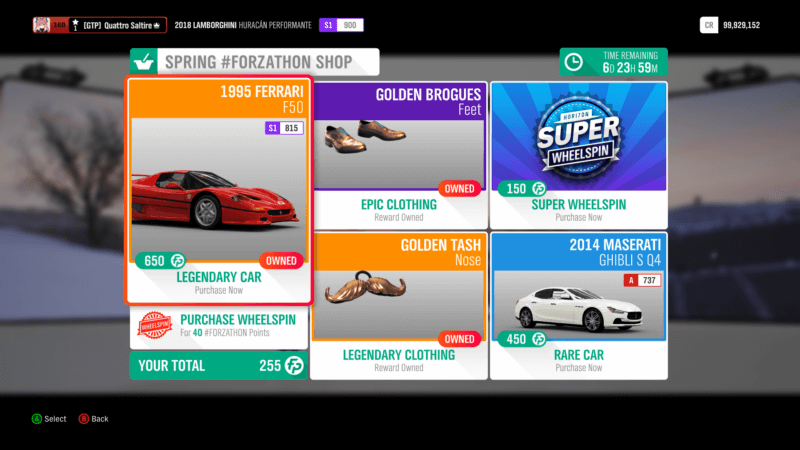 Italy displays its pride once again this week in the Forzathon Shop. Taking the lead is the 1995 Ferrari F50.

Succeeding the iconic F40 was never going to be easy, and the F50 is often overlooked for not moving the game on in quite the same way. It didn’t fall short of the mark in terms of performance though. Billed as an “F1 car for the road”, the F50’s 4.7-liter V12 can trace its roots to the Ferrari 641. Producing 513hp, the F50 was also the first open-top Prancing Horse to crack 200mph.

You’ll need to cough up 650 Forzathon Points for the F50. However, if you’re by tempted the F1-derived V12 noise, the F50 is ripe for the taking.

If you’re after sports car credentials, but want something more restrained, there’s the 2014 Maserati Ghibli S. With over 400hp from a 3.0-liter, twin-turbocharged V6, the Ghibli aims to grab an Italian slice of a sports sedan market dominated by the Germans.

The Ghibli comes in a little cheaper, at 450 FP, but if you find the German sports sedans too boring, then the Ghibli’s Italian charm will fill the void.

Avatar cosmetics this week include the Golden Mustache and the Golden Brogues.

Gary Slater · Aug 20, 2020· Comments
As 2022 begins to enter the closing stages, Forza Horizon 4 welcomes December with an apt Winter season. With festive plans beginning to take shape, players are continuing to hunt down the latest events.

Gary Slater · Aug 20, 2020· Comments
For many Americans, this week is a time of giving thanks, but for those at the UK Horizon Festival the time has come for a new Autumn season to begin in Forza Horizon 4.

Gary Slater · Aug 20, 2020· Comments
As temperatures soar around the UK, a new Summer season has officially gotten underway in Forza Horizon 4. We’re now in the opening stage of Series 55, meaning a fresh remix of events and prizes that are once more waiting to be claimed.

Gary Slater · Aug 20, 2020· Comments
Sunshine and rain showers around the UK are the ideal recipe for a new Spring season in Forza Horizon 4. The end of Series 54 is in sight and players around the festival are mounting one last assault to grab the remaining content up for grabs.

Andrew Evans · Aug 20, 2020· Comments
Forza Horizon 4 is now midway through its 54th Series, as Winter once again reaches the UK.

Gary Slater · Aug 20, 2020· Comments
Darker nights and spooky creatures roam the streets as another Autumn season makes itself known in Forza Horizon 4. Halloween is just around the corner and there’s plenty of treats on offer in the latest events.

Gary Slater · Aug 20, 2020· Comments
The heatwave gripping the UK festival means that a fresh new Summer season has officially begun in Forza Horizon 4. We’re marching into Series 54, with a freshly assembled set of events and targets for players to aim for over the next four weeks.

Gary Slater · Aug 20, 2020· Comments
Flowers are blooming and the sun is shining as a new Spring season gets underway in Forza Horizon 4. As the 10th Anniversary celebrations are kicking off in Mexico, those in the UK are nearing the end of Series 53 with a final push to grab the last batch of current content.

Gary Slater · Aug 20, 2020· Comments
Dark nights and a white landscape mean that a new Winter season has started in Forza Horizon 4. Plowing through deep drifts and treacherous ice will uncover the latest round of events and more content to fill your garage.