Engines are roaring across the land as Autumn kicks into high gear once again in Forza Horizon 4. As the leaves change color, there’s a swathe of new events to try out around the UK.

It’s a quiet week with no new content arriving. There is another chance to earn one of the most hardcore BMWs around, as well as a mixture of Playlist prizes for 50% and 80% completion. 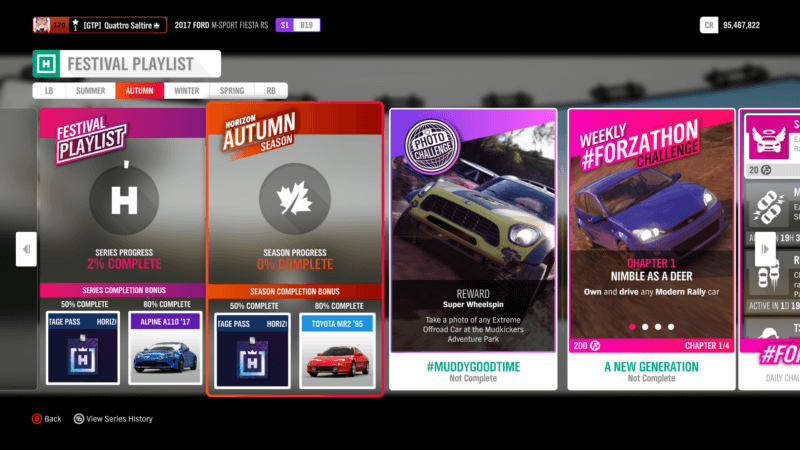 Only one car of note is available for the Playlist completion prizes this week: the 1995 Toyota MR2 GT.

The SW20 generation of Toyota’s popular roadster is arguably one of the best iterations, and the GT variant is also one of the most powerful models to come from the factory. Under the Ferrari-inspired styling sits a 2.0-liter turbocharged engine shared with the Celica. Making 241hp, the turbo MR2 has some serious speed to run with its rivals.

If you’re keen to visit Horizon Backstage, then another Backstage Pass is also available to be won.

Another classic Photo Challenge returns for Autumn this week. #MuddyGoodTime requires you to hop into an Extreme Offroad car and get dirty in Mudkickers Adventure Park. Seasonal championship prizes include the Ferrari 288 GTO and 2018 Porsche Cayenne.

The standout prize is the 2010 BMW M3 GTS. Marking the first stripped out M3 since the CSL, the GTS puts much more emphasis on track use. With a weight reduction of 165lb, the GTS also gets a larger 4.4-liter V8. Power goes up to 444hp along with numerous handling tweaks, making this beast even sharper.

You’ll need to win the “German Engineering” championship if you want the M3.

A well known Showcase Remix returns for Autumn as well. “Forest Sprite” puts you back behind the wheel of an Austin-Healey Sprite in a duel against a team of motocross bikers. 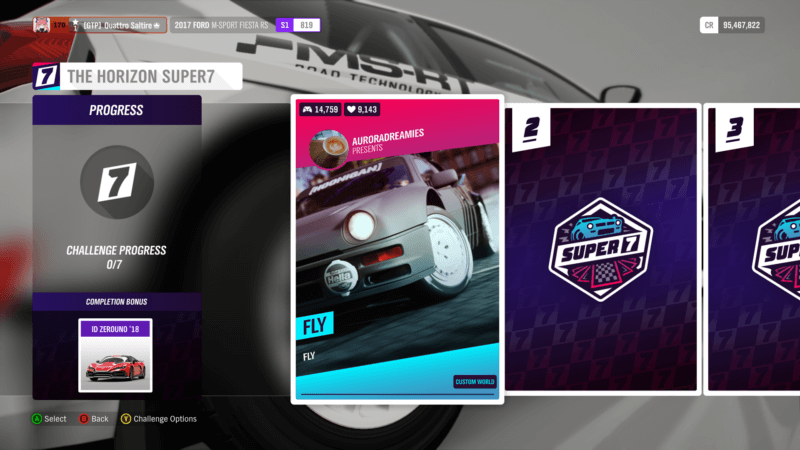 More Super7 challenges are now available as part of the latest season. If you finish all seven cards, your prize is the rare Italdesign Zerouno supercar.

Read on further for the rest of Autumn’s events: 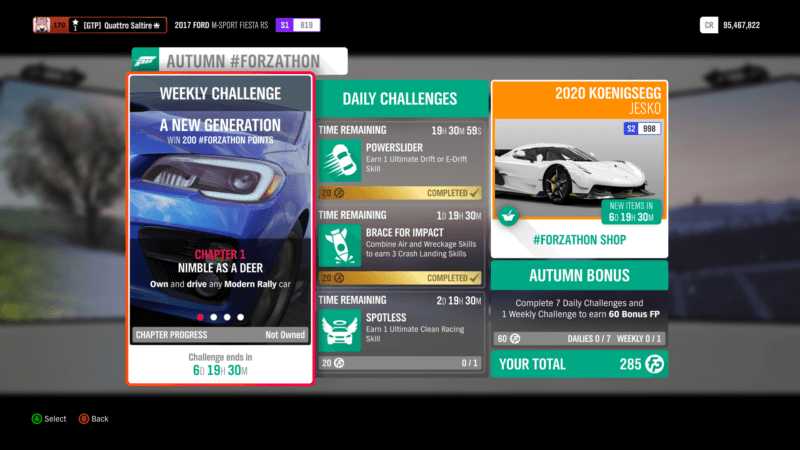 It’s time to hit the trails this week as Forzathon puts the spotlight on Mordern Rally cars. Climb into one of these four-wheel drive thoroughbreds to get started.

Next, push your weapon to its limits to hit a top speed of 185mph — some generous tuning will be required here. After that, take to the skies and earn a total of 15 stars from Danger Signs.

Finally, test your endurance by winning a Dirt Racing Series event at daunting Gauntlet to bring the curtain down on the newest challenges. 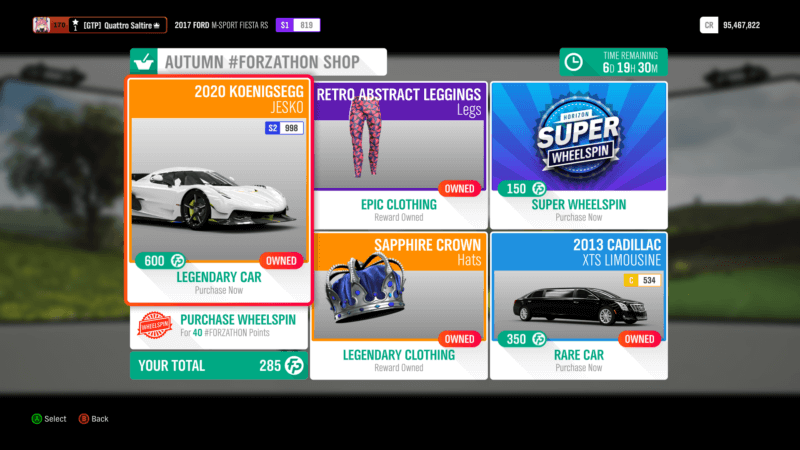 Speed is king for the shop lineup this week, as the main highlight is the 2020 Koenigsegg Jesko.

Replacing the record-setting Agera RS, the Jesko aims for the singular purpose of becoming the fastest street car ever made. Giving the Jesko its power is Koenigsegg’s familiar 5.0-liter, twin-turbocharged V8 making 1,280hp. Give it some tweaks and you’ll be pushing 1,600hp. Find a long enough stretch of road and you may be knocking on the door of over 300mph.

At 600 Forzathon Points, you’ll be paying a high price for the Jesko, but you’ll have the ability to outrun almost anything in return.

If you want more style, there’s the Cadillac XTS Limousine. Based on a regular XTS sedan, the 70-inch extension allows for much more luxurious travel in the back. Performance will take a hit as the 304hp from the 3.6-liter V6 has to move over 5,500lb.

You’ll be paying just 350 FP for the XTS. If you want to showcase your style, then a limousine is one of the best cars to have.

Clothing items for this week include the Sapphire Crown and some Retro Abstract Leggings.

Gary Slater · Mar 18, 2021· Comments
January may be in the closing stretches, but Winter has returned for another round in Forza Horizon 4. Through the blizzards and the snow drifts, everyone at the UK festival continues to battle through the elements in order to seek out the latest events.

Gary Slater · Mar 18, 2021· Comments
As the rain begins to pour across the UK, a brand new Autumn season is revving up to take charge at the festival in Forza Horizon 4. Players are prepared to brave the muddy elements as there’s more events waiting to be conquered.

Gary Slater · Mar 18, 2021· Comments
A new Summer season has rolled around again to kick off a fresh series in Forza Horizon 4. We’re in the opening stage of Series 57, with another round of prizes waiting to be claimed during the next four weeks.

Gary Slater · Mar 18, 2021· Comments
It’s a new year, and Forza Horizon 4 is kicking off 2023 with a brand new Spring season at the UK festival. We’re also saying goodbye to Series 56 this week, with a final dash to pick up the remaining cars waiting to be claimed.

Gary Slater · Mar 18, 2021· Comments
Winter has settled across the UK once more, as festivalgoers are preparing to see off 2022 and welcome the new year in Forza Horizon 4. Along with the Hogmanay festivities, players are digging amongst the snow to grab the latest batch of prizes before 2023 arrives.

Gary Slater · Mar 18, 2021· Comments
Autumn takes a hold over the UK for another week in Forza Horizon 4 during this Christmas period. If you’re unable to make it to the festivities in Mexico, there’s still plenty of activities to keep you busy from wrapping presents.

Gary Slater · Mar 18, 2021· Comments
The countdown to Christmas is on, and Forza Horizon 4 is kicking off the preparations with a brand new Summer season. We’re now into Series 56, meaning that there is a freshly baked remix of content across the festival that will help see players into the new year over the next four weeks.

Gary Slater · Mar 18, 2021· Comments
The festive spirit is kicking up a gear as attention begins to turn towards the holidays. To help out, the UK festival is welcoming in a new Spring season to Forza Horizon 4. We’re also into the last season of Series 55, with a last push for the remaining content for this week.

Gary Slater · Mar 18, 2021· Comments
As 2022 begins to enter the closing stages, Forza Horizon 4 welcomes December with an apt Winter season. With festive plans beginning to take shape, players are continuing to hunt down the latest events.