The four-week cycle of Forza Horizon 4 is almost at an end again, with the final season coming later this week. That means it’s very nearly time for a new series — Series 35 — and the Forza team has been teasing us with what new content might be coming to the game.

Along with dropping the usual image clues ahead of the lunar-monthly live stream — which you’ll be able to catch on Thursday April 29 — there’s also a bundle of riddles in this week’s “Torben Tuesday”. They come by way of cryptic drawings on the office whiteboard, which you can see below. 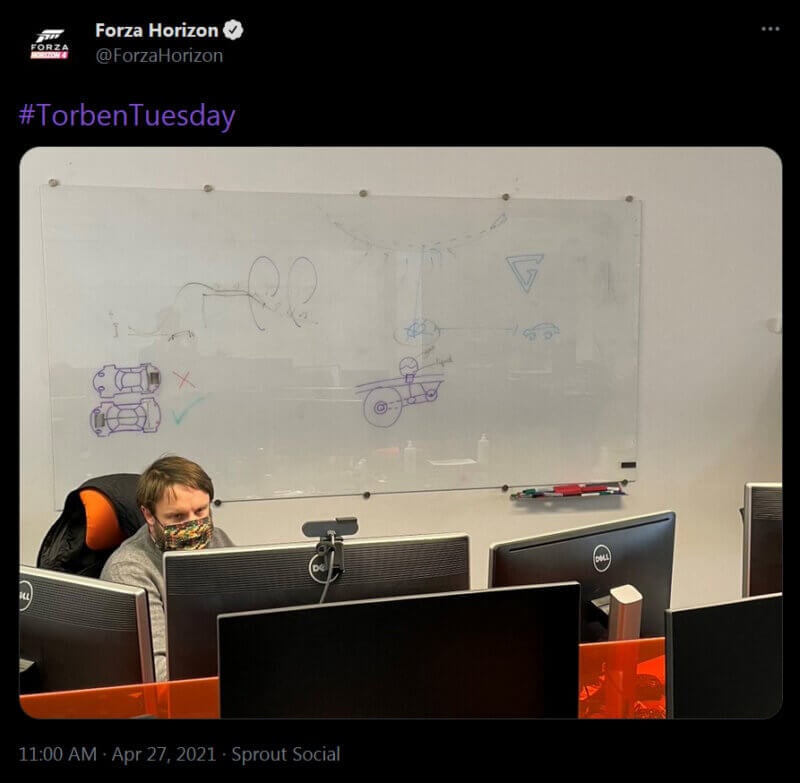 The most obvious one here is over on the right. While some might think the “G” represents the Ginetta logo, it’s the wrong shape and is actually the logo from the physical television game show Gladiators. That neatly dovetails with the teaser image you’ll see at the top of this article, as well as an interior shot posted to Twitter earlier in the week, showing a Jeep Gladiator in Rubicon trim.

An engineering diagram appears at the bottom-center of the board, and this one is a bit of a giveaway too. It shows how a hydropneumatic suspension system works, which rather hints at the Citroen DS and probably the 1975 Citroen DS23 from the leaked car list posted in 2019.

One that caught our eye in particular was the backwards “99” in the upper-left quadrant. It happens to look exactly like the time-travel fire streaks left in the sky by Doc Emmett Brown’s DeLorean after lightning strikes the flying car in Back to the Future 2 and overloads the time circuits. A return for the DeLorean DMC-12, perhaps?

This is where things start getting a little more cryptic. The diagram on the right looks as though it’s hinting at a car that switched from rear-engined to front-engined, which puts us in mind of Porsche. While the 911 remains resolutely rear-engined, some other models have the power up front, notably the 924/928/944/968 and the Panamera. Of these, only the 928 has yet to appear in Forza Horizon 4.

Two other possible clues are a little harder to decipher. An image on the left appears to show a car passing through checkpoints before hitting a jump. That could refer to something new in Super7, perhaps High Stakes, although it’s not clear. The drawing on the right looks like it’s showing some kind of astronomical diagram, and based on the position of the car, planet, and Sun it could be depicting a solstice — hence the Pontiac Solstice — though we wouldn’t be putting any money on that.

All will hopefully come clear on April 29 when the Forza Monthly live stream takes place, which you can watch below starting from 1800 UTC.