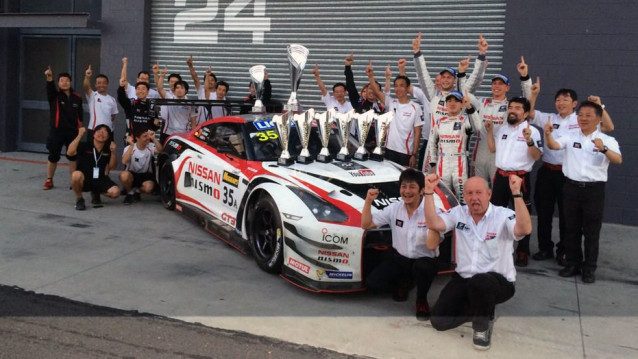 More than 20 years since the Nissan brand tasted victory at an endurance race at Bathurst with the R32 GT-R, the NISMO Athletes have returned to score an amazing victory in the Bathurst 12 Hours – snatched almost at the death.

The team had qualified the #35 car in 3rd overall – and at the head of the GT3 Amateur category following the last minute substitution of expectant father Alex Buncombe for the 2012 German GT Academy winner Florian Strauss – but the crew had to work through the night to repair the car as Katsumasa Chiyo tagged the wall on his very next lap. With a pristine car to start in, they immediately set about improving their position as Wolfgang Reip leapt past the 2nd place Gallardo and joined the pole sitting R8 as they streaked ahead of the field to a 10s gap after just a few laps. This set the rhythm for the team that would last throughout the safety car punctured race as they were never out of the top six on the road. 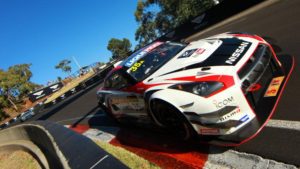 It was understudy Strauss who first put the GT-R at the head of the pack with 100 laps gone and the Nissan team avoiding the kind of incidents that ended so many races. 16 of the 50 entrants failed to finish the race and there were 20 separate safety car periods over the 12 hour race – a new and probably unwanted record!

The last of these safety cars set up the grandstand finish. Called with 10 minutes remaining to recover a stopped car at Murrays, it peeled in to allow just enough time for two laps at the finish. With Chiyo back at the wheel and taking the restart in 3rd, the GT-R immediately dispatched the 2nd place Phoenix Racing Audi R8 into the first turn before barrelling past the lead Bentley up the following Mountain Straight to hit the front before the second corner. It was a position he never relinquished, taking the chequered flag after 269 laps and by just 2.5 seconds – somewhat of a different way to how he ended 2014’s race! 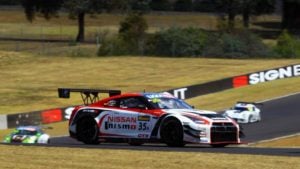 It’s the second silverware of the season – in just two races – for the GT Academy team and the GT3 GT-R, following a class podium at the 2015 Dubai 24 Hours, but taking both class honours and the outright victory in a major endurance race so early in the season will be something special for the team. With this victory under their belts confidence will be high – and given that Nissan’s LMP1 project is likely to feature Academy graduates, racing a season long World Endurance Championship campaign, it could be the start of a great year for the innovative gamer-to-racer program.

Images courtesy of @NISMO and @Nissan_MSport.