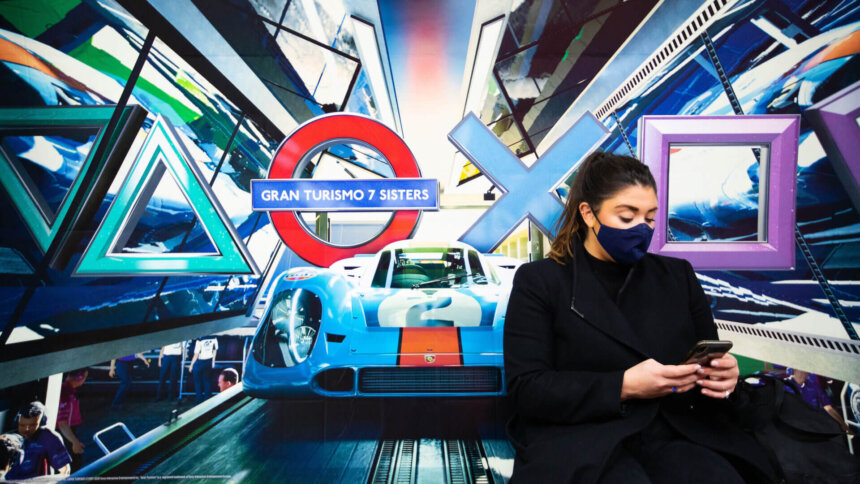 With the European launch day for the PlayStation 5 just around the corner, Sony has staged an impressive publicity stunt. PlayStation 5 has taken over one of the busiest public transport networks in the world, the London Underground, and — among other things — given Gran Turismo 7 its own station.

To drum up awareness around tomorrow’s launch, Sony has concentrated on Oxford Circus. This is a pretty busy station in the heart of London, at the intersection of three separate lines, but now it’s wearing some new branding. Sony has replaced the giant, illuminated street signs that mark the station’s four entrances with signs depicting the classic PlayStation symbols branding:

From one iconic shape to four. We’ve given the Oxford Circus Tube signs a #PS5 upgrade. 👀 pic.twitter.com/iw9qlEXR7B

Of course, as coincidence would have it, the red circle is already part of the London Underground’s own signage. Oxford Circus is also the location of Microsoft’s flagship UK store, which we’re pretty sure isn’t a coincidence.

Inside the station you’ll also find plenty of PlayStation branding, including the platform signs. Taking over Oxford Circus alone wasn’t enough though. In addition, Sony has temporarily renamed several of the stations on the Tube network after some of the leading PS5 titles.

That means that you can now travel to Horizon Forbidden West Ham on the District Line, Ratchet & Clankaster Gate on the Central Line, and Miles End (after Spider Man: Miles Morales) on the Hammersmith and City Line. Last, but far from least, on that list is the newly renamed Gran Turismo 7 Sisters station, about five miles away from the Copper Box which staged the first Gran Turismo Sport event.

Although the four new signs at Oxford Circus will only last for 48 hours, before being removed to Sony’s own London offices, the station rebrands and internal advertising will remain in place until December 16.

PlayStation 5
29 Comments Discuss this post in our forums...
Test Your Badge Knowledge With Our Car Logo Quiz

Gran Turismo Sport 920 Jan 11 by Andrew Evans
GT Sport fans have a new set of Daily Races to occupy them over the next seven days, with a couple of old favorites and combinations we’ve not seen in…

Gran Turismo Sport 920 Dec 28, 2020 by Andrew Evans
The last set of GT Sport Daily Races for this year is heading to the real world, and taking players to some of the game’s destinations around the globe. Race…