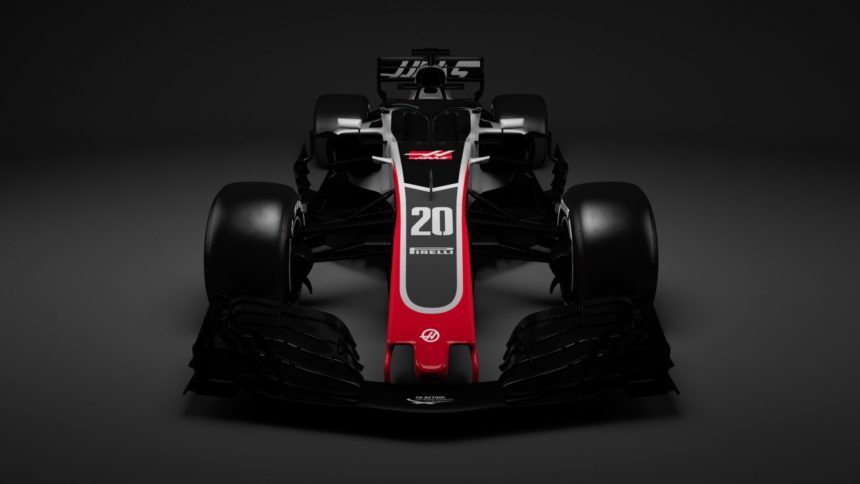 American outfit Haas F1 is the first up to bat in revealing its 2018 contender, the VF-18.

As you may have heard, the 2018 season will see a drastic change to the aesthetics of this year’s cars. While tires will play a big role, the most obvious change is that of the halo. The head protection device has stirred quite the controversy as of late.

Haas’ 2018 chassis builds off of last year’s VF-17, and rightfully so considering it carried the team to eighth place. Described as an evolution, the third-gen Haas racer focuses more on refining last year’s car. The addition of the halo device and absence of the sharkfin engine cover and T-wing are among the obvious changes on this year’s car. For reference, the latter two are now outlawed from the sport as reported last year.

F1’s new safety device is proving to be a challenging addition for all teams this year. It may be strong enough to support a double-decker bus, but it isn’t without drawbacks.

“The biggest part of the car’s evolution was the addition of the halo. It took quite a bit of study by the aerodynamicists, but the designers had to work hard to modify the chassis so the halo could survive the mandated loads.

Like the Haas cars before it, the VF-18 relies on a Ferrari power unit and transmission. This year the team intends to go several steps further, using the Italian team as a benchmark. Gene Haas, the American team’s founder, wants to close the gap to Ferrari to within half a second.

“It’s no secret we use a lot of Ferrari equipment, so we’re using them as our baseline,” said Haas. “We need to be within a half-second of the Ferraris in order for us to be competitive. We weren’t last year. I would say we were a second to a second-and-a-half slower than the Ferraris. Overall, we were maybe two seconds off the pole qualifiers, so we need to knock a second off that if we really want to be competitive.

We’ve eliminated a lot of the variables where we knew we were weak, and we knew where we needed to focus. We need to be able to go to the majority of races and put the car down on the track and be fast. We’ve focused on what it’s going to take to get the cars to be consistent and to close that gap between the top cars.”

As we saw last year, Ferrari consistently threatened Mercedes throughout the 2017 season. That’s a tall order for the team as we approach its third season in the sport. Should Haas be able to find the pace of even last year’s Ferrari, it will be quite an upset.

Both Romain Grosjean and Kevin Magnussen remain onboard with the team, so the talent is there. The VF-18 officially hits the track in Barcelona for pre-season testing on February 26.