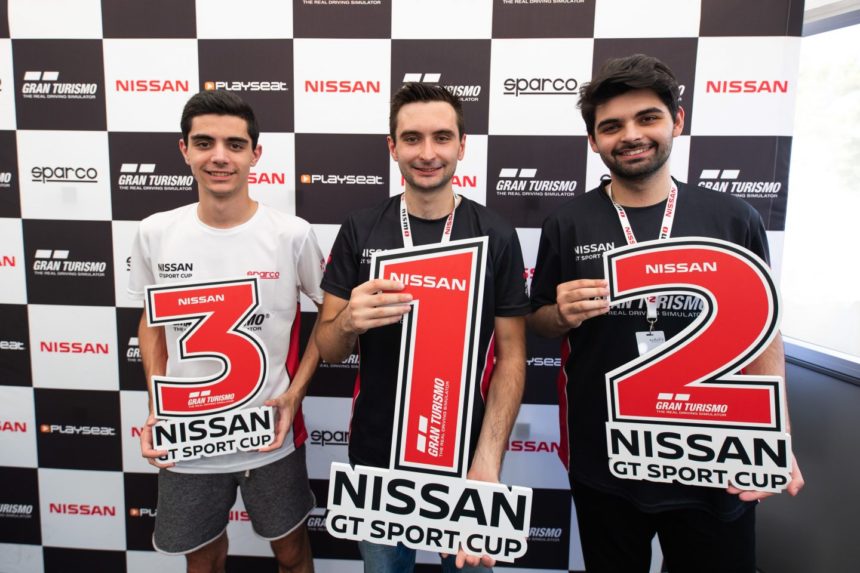 20-year-old Patrick Blazsán will get his first visit to Japan later this year after winning the inaugural Nissan GT Sport Cup last weekend.

Blazsán (TRL_Fuvaros) joined 47 other finalists in Barcelona last weekend for the Nissan GT Sport Cup Finals. 36 of these quick racers — including Blazsán and Team Redline teammate Mikail Hizal (TRL_LIGHTNING — qualified through the in-game FIA Championships. The other dozen earned their spots through a final on-site wild card event the day before.

Hizal actually qualified on pole for the final race, maintaining a consistent front-row performance through the first, second, and third rounds of elimination. They don’t call him Lightning for nothing!

The final race took place on the newly-available Fuji Speedway. France’s Loris Garnier found himself sandwiched between Blazsán and Hizal after qualifying second. For this last race, the drivers would need to deal not only with the faster, Gr.2 GT-Rs, but also a longer 10-lap race length complete with tire wear and fuel consumption.

The full grid was as follows:

You can watch the final race right here:

Being the pros that they are, the entire pack made it through the first corner cleanly. The top three quickly gapped the rest of the field, but the close fighting meant Kaisla was able to be within half a second coming into the first braking zone on lap two.

Kaisla would soon find himself in podium position as Garnier made the first big mistake of the race. Powering out of turn one, the Frenchman’s rear left wheel caught the curbing, spitting his Nissan sideways. Like that, he was down to the back of the pack.

The two TRL drivers swapped positions up front a handful of times before Hizal took to the pits on lap four. Blazsán took a risk on the over-cut by staying out an additional lap. It paid off though, as he emerged half a second up from his German teammate.

Hizal kept his Nissan’s red nose close to the bumper of Blazsán, getting within only a tenth. The gap grew to over a second starting the final lap however, and that distance plus his more worn tires sealed Lightning’s runner-up position.

It was Lopez who rounded out the podium and earned the hometown hero status in the process. He was a wildcard, showing up at Catalunya solely to try his luck as a competitor in the GT Sport Cup. We’d call this finish a brilliant effort, then!

Despite not clinching the victory, Hizal didn’t go home empty-handed. As the number one Nissan driver in the FIA Championship, he also earned a trip to the NISMO Festival at Fuji circuit. Both he and Blazsán will get a very rare treat in the form of a tour of Polyphony Digital’s Japanese studio as well.

Congrats to all the drivers! Check out every other round of the Nissan GT Sport Cup below.