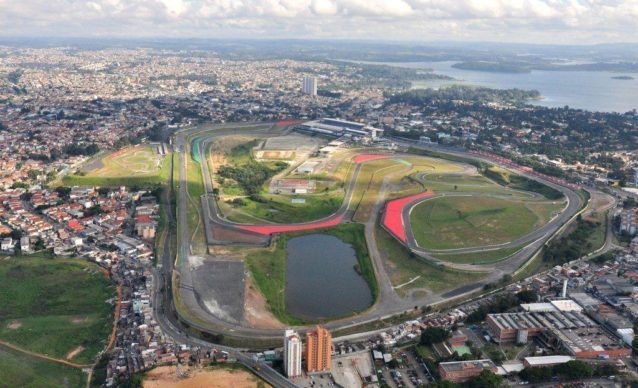 The Autódromo José Carlos Pace, better known as “Interlagos”, is on its way to Project CARS 2.

Ian Bell, head of Slightly Mad Studios, has been very active in our forums as of late. He recently explained that new tracks in Project CARS 2 were laser scanned with drones, and has been answering many questions from the community regarding the highly-anticipated game.

His latest tease reveals a circuit that is eagerly anticipated by many fans: Interlagos. In a post in our forums, Bell stated, “Small update on Interlagos. We’ve made contact with the nice people at the circuit and have also sourced a laser scan. As soon as the team catch a breath they’ll start working on it.”

The post implies that Interlagos is in the early stages of development. Although the game is not due for release until later this year, the track is likely a candidate for a post-release DLC pack.

Ian Bell also had something to say regarding DLC for Project CARS 2, “I think this time we’ll give ourselves a little more time per DLC pack. So most likely less packs [than the first game], more content per pack.”

Also, when responding to a post regarding other possible tracks in South America being included, Bell replied, “We’re not done yet. We did translate pCARS into Brazilian Portugese. So we haven’t completely ignored South America.” Could this mean more tracks from the Continent? Perhaps a brand-new, custom-built road experience analogous to the California Highway track in the original Project CARS? We’ll have to wait and see.

Interlagos, Portuguese for “between lakes” and officially known as the Autódromo José Carlos Pace is one of the most iconic racing circuits in the world. It’s famous for the high-speed bend in the home straight, large undulation and quick lap times. The track has also staged the conclusion of many Formula 1 World Championships, as well as famous victories by country men Ayrton Senna and Felipe Massa.

Since it’s a track on the official Formula 1 calendar, Interlagos can of course already be experienced in F1 2016. It’s also available in iRacing, but many fans are eager to try the track in other racing games. When voting on tracks they want in a future Gran Turismo game, Interlagos is the tenth most-requested game by the GTPlanet community.

Feeling a little bit out of the loop regarding Project CARS 2? We’ve got you covered! Catch up with this handy guide to everything we know so far, and stay tuned to GTPlanet for many more updates to come.

Gary Slater · Feb 13, 2017· Comments
As 2022 begins to enter the closing stages, Forza Horizon 4 welcomes December with an apt Winter season. With festive plans beginning to take shape, players are continuing to hunt down the latest events.

Andrew Evans · Feb 13, 2017· Comments
The final set of Forza Horizon 5 seasonal playlist challenges for the current Series is available from today, with seven more days to get through the donut-based activities.

Andrew Evans · Feb 13, 2017· Comments
The latest seasonal preview for Forza Horizon 5 will stream later today, Thursday December 1, revealing what new content, challenge, accolades, events, and world changes are coming up for players over the next couple of month.

Andrew Evans · Feb 13, 2017· Comments
GTPlanet had the opportunity to sit down with Gran Turismo series creator Kazunori Yamauchi as part of a round-table interview during the recent GT World Series Finals in Monaco.

Andrew Evans · Feb 13, 2017· Comments
One of the bigger stories surrounding Gran Turismo in 2022 is production finally beginning on the long-awaited movie of the same name.

Andrew Evans · Feb 13, 2017· Comments
As the curtain drops on another exciting season of the Gran Turismo World Series, Polyphony Digital is already looking forward to a bigger and better 2023.

Jordan Greer · Feb 13, 2017· Comments
Ferrari has finally unveiled its highly anticipated Vision GT project car during the Gran Turismo World Finals here in Monaco. As you might expect from the famous Italian company, it’s quite a looker!