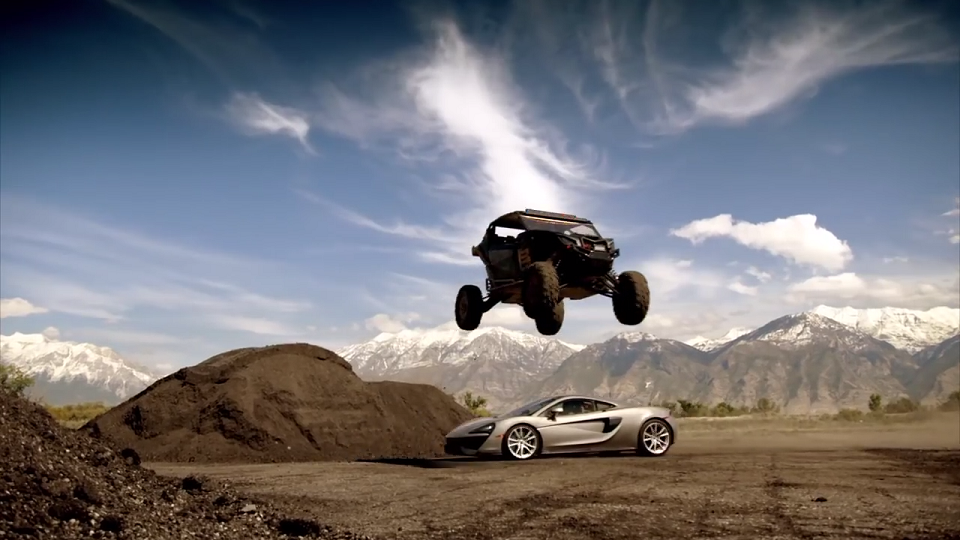 Season two of the Grand Tour is in full swing on Amazon Prime. However, rival show Top Gear is just around the corner and just put up a new trailer on its YouTube channel.

In the short clip, the trio (Chris Harris, Matt LeBlanc, and Rory Reid) travels to Utah to put some supercars up against an unlikely opponent — Ken Block, who poses as a policeman.

Block is a resident of Park City, Utah so he does have the home field advantage in this battle. To even the odds, Block gets to pursue the hosts around in his Can-Am Maverick X3. However, the X3 is far from stock so it might not be the fairest fight after all.

For the matchup, the hosts roll out a trio of high-performance metal in hopes of getting the upper hand.

Rory opts for a Caldera Red Jaguar F-Type. Given the nature of Top Gear, we assume it’s the 550hp R model or even the 575hp SVR.

Harris, rather predictably, goes for a full-on supercar to avoid Block. Running the 562hp McLaren 570S, we wager he brought the best car for the pursuit.

Finally, Matt LeBlanc gets a Triple Yellow Ford Mustang GT350R. At 536hp and 0-60 in just 4.3 seconds, it seems like a good car for the job. Not good enough, going by the trailer: Block does get the upper hand and presents LeBlanc with a citation.

From the brief clip, it looks like the segment is set around the Utah Motorsport Campus. The UMC is home to the Ford Performance Driving School and features a multitude of dirt and asphalt courses in which to run amok on. It’s also Block’s home track.

No release date is currently available for series 25 of Top Gear. However, all indications point to a release sometime this spring.

With a focus on a younger audience this series, we expect even more hijinks once a proper trailer hits YouTube.