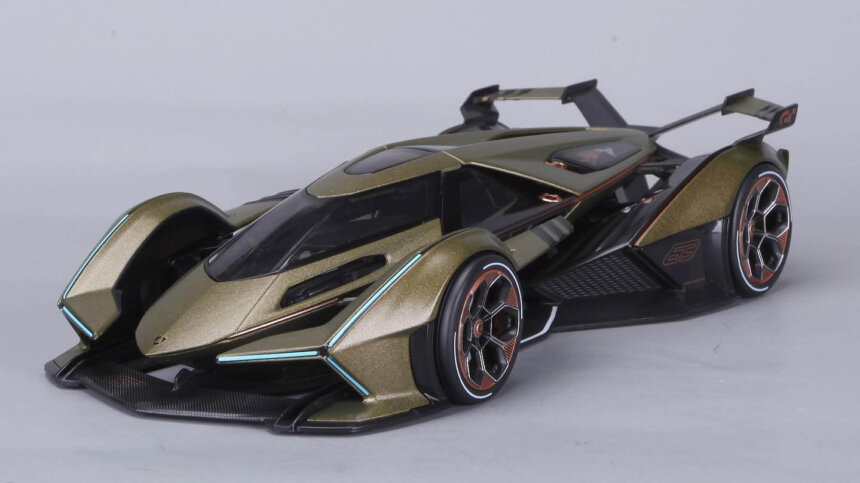 If you like Gran Turismo, Gran Turismo collectibles, and model cars, US-based model manufacturer Maisto has a treat for you. The company will be producing 1:18 scale models of the newest Vision Gran Turismo car, the Lamborghini Lambo V12, for its 2021 collection.

Featuring in its recently released 2021 catalog, the 1:18 scale Lambo V12 VGT is a replica of the car Lamborghini’s Stefano Domenicali unveiled at the 2019 FIA Gran Turismo Online Championship final in Monaco. The car is closely related to Lamborghini’s Sian FKP37, using the same 6.5-liter V12 and supercapacitor powertrain. One key difference is that the VGT car is a monoposto — a single-seat car — with a center driving position.

Interestingly, Maisto’s brochure shows that the Lambo V12 will come in two different colors. To now we’ve only seen the VGT presented in the Sian-like “Electric Gold” green paint, but Maisto also has the car available in blue. That could be the “Uranus Blue” we’ve seen on the Sian Roadster, but either way suggests we’ll see multiple colors when the car arrives in a Gran Turismo title.

The Maisto model will arrive later this year. Of course Gran Turismo players are yet to get their hands on the virtual model, so depending on when Gran Turismo 7 arrives they may be unboxing the model before driving the “real” thing.

However, the Lamborghini isn’t the only Vision GT that Maisto makes. There’s also a selection of three 1:32 scale VGT cars available, with die-cast metal and plastic construction. You can pick up models of the Mercedes-AMG Vision GT Racing — the first car in the VGT project — along with the Nissan Concept 2020 VGT and the McLaren Vision Gran Turismo.

For those who like their models to move, Maisto also has a Vision Gran Turismo-specific item in its Maisto Tech RC range. Officially known as the “Race Circuit Vision Gran Turismo”, it’s a 1:43 scale slot car set, featuring the Nissan and Mercedes. Maisto’s UK distributor has kindly provided us with a sample of the slot car set, and it’s a pretty neat collectible which should keep your kids busy while you’re on the driving rig.

We don’t have a date or price on the Lamborghini just yet, but figure on something in the region of $40 (£30). The other VGT items are already available and, depending on the store, come in at around $20 (£15) each.

Gran Turismo Sport 1150 Mar 1 by Andrew Evans
It’s the first of the month and the start of a new week, and there’s another set of new GT Sport Daily Races to keep us all occupied for the…